The Friars started out the day with the first selection and continued with the trend of taking a pitcher.

Sunday night, general manager A.J. Preller drafted two right-handed pitchers and one southpaw. All have major upside and will be big additions to the Padres’ farm.

I’m sure many Padres fans were assuming the next pick would be a position player, only see another right-hander taken off the board.

Williams marks the second collegiate player taken for the Padres but is also the second who did not pitch last season. Williams, like Lesko, underwent Tommy John surgery last year but pitched well during the 2021 season.

The Padres took Lamar King Jr. with the 120th pick of the draft. The first position player taken by Preller as the catcher is a high school product from Maryland. Don’t let the name of the school fool you, but Calvert Hall College High School is one of the top baseball teams in the state as they are 28-time MIAA Champions.

King Jr. is committed to Georgia Tech and will have until August 1 to decide. He is the No. 1 catcher in the state and is known for his defensive skillset. King Jr. only played in eight games last year but hit .545 with 12 hits, four home runs, and 13 RBIs. The catcher finished the year with more hits than outs, and that is just a bonus to his game.

The next selection was first baseman, Nathan Martorella from UC Berkeley. Martorella finished on the All-Pac-12 First Team after a great year for the Golden Bears. The lefty hit .333 with 11 home runs and 46 RBIs in 2022. He also had a .424 OBP and a fielding percentage of .989.

Martorella is listed as 6-foot-1 and roughly 220 pounds. He has the potential to become a great power hitter for the Friars.

Nathan Martorella gearing up for his third year with @CalBaseball Expect big things from this MLB Prospect @LeidigLee pic.twitter.com/koFRTYgT1N

With the 180th pick, Preller took outfielder Jakob Marsee from Central Michigan University. Marsee also bats left-handed and finished the 2022 season with elite numbers. The outfielder hit .345 with seven home runs and 66 RBIs. He isn’t known for his power but has proven to get extra-base hits with a 1.017 OPS. 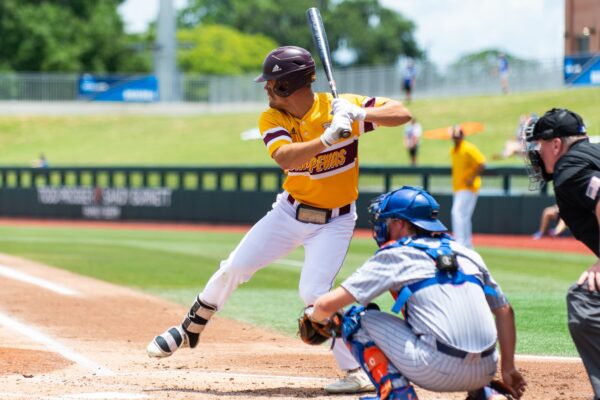 The seventh round approached quickly. The Padres stayed on pace and picked their fourth position player in a row. This was another outfielder by the name of Nick Vogt. Vogt played for UC Santa Barbara and ended last year hitting .316 with seven home runs and 49 RBIs.

The outfielder improved his offensive game a ton compared to his first two seasons. If he continues to get better, he could be a steal for this ball club.

Vogt joins Marsee as the only two outfielders taken during the first two days of the draft.

The Padres took another first baseman in the 8th round. They selected Griffin Doersching from Oklahoma State University.

Doersching is someone to keep an eye out for as he continues to get better.

GRIFFIN DOERSCHING IS BIG AND STRONG AND CAN HIT BASEBALLS VERY FAR pic.twitter.com/6sm2DtxlIX

The final two picks of the day were both pitchers from the Big Ten Conference. Right-hander Dylan Nedved from the University of Iowa was taken in the 9th round, and lefty Jackson Smeltz from Purdue University ended the day for the Padres in the 10th round.

Nedved is the second Hawkeye taken for the Padres as he will join his teammate Adam Mazur in San Diego. Nedved started games last year, came in as a reliever, and even closed games out for the Hawkeyes. He went 6-2 with a 3.47 ERA with three saves in 19 appearances, including six starts.

In 57 innings, he struck out 79 hitters and had an opposing batting average of just .198. Smeltz joins Snelling as the two southpaws taken in the first two rounds.

That concludes day two. Stay tuned as the draft continues on Tuesday.

Chris is a graduate of the University of San Diego. He is the former Sports Editor for the USDVista newspaper. Chris is also an athlete and is huge fan of San Diego sports. Chris has covered the San Diego Loyal, and contributes regularly about the Padres.
Tags: 2022 MLB Draft, Padres 2022, Padres MLB, San Diego Padres