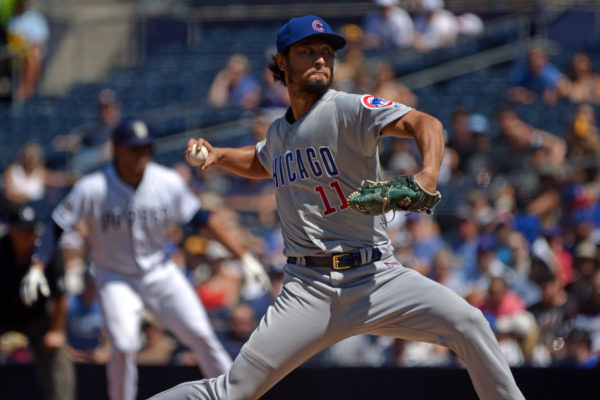 Twice this week, the Padres have been named a potential suitor for the services of starting pitcher Yu Darvish. What does a trade for the Cy Young runner up look like?

As the Padres continue to search for Mike Clevinger‘s replacement in the starting rotation, one name that has twice been linked to Friars this week is Chicago Cubs starting pitcher Yu Darvish.

The 34-year-old posted one of his best seasons in quite some time in 2020, finishing second in Cy Young voting. Darvish made a name for himself with the Hokkaido Nippon-Ham Fighters in the Pacific League. He was posted to Major League Baseball after the 2011 season, accepting the highest bid from the Texas Rangers. He earned All-Star selections in his first three years in the MLB while finishing in the top ten of Cy Young voting in both 2012 and 2013.

When the Rangers entered a bit of a transition period, the Rangers traded Darvish to the Los Angeles Dodgers, where he posted a 3.44 ERA in nine starts to close out the second half. He imploded in Game 7 of the World Series against the Astros, allowing eight earned runs in only 3 1/3 innings of work. Following the season, Darvish signed a six-year, $126M contract with the Chicago Cubs.

His tenure in Chicago got off to a rocky start, making just eight starts before landing on the injured list with a stress reaction. He attempted to make a comeback for the Cubs’ postseason run, but after just an inning, he was pulled from a rehab start and shut down for the year. The first half of 2019 yielded little optimism for Darvish to prove he was capable of returning to the pitcher he once was, but he went on to post a 2.76 ERA in 13 starts in the second half of the year.

That success carried over into the shortened 60-game schedule, logging a 2.13 ERA  in 12 starts. If not for a four-run outburst allowed in his second to last start of the year, he may have very well taken the Cy Young Award away from eventual winner Trevor Bauer.

The #Padres are one possible suitor for Yu Darvish, as I mentioned on @MLBNetwork a few moments ago. San Diego has high-end prospect depth from which to trade, and A.J. Preller knows Darvish well from their time together with the #Rangers. #MLBNHotStove

The Cubs enter this offseason in a transition, with President of Baseball Operations Theo Epstein stepping down after serving a decade in that role. They also said goodbye to former fourth overall pick of the 2014 Draft in Kyle Schwarber. Epstein broke curses in both Boston and Chicago and made it clear he wanted no part of a rebuild. Looking to shed payroll this offseason, Darvish is being made available in an attempt to lure young pitching arms back to Chicago, which the Cubs’ farm system desperately needs.

Any trade with the Cubs likely begins with Adrian Morejon. The Padres could probably get this deal done, keeping top pitching MacKenzie Gore and potentially Luis Patino. But the Cubs would probably ask for Morejon and someone like Ryan Weathers, as both players either have some Major League experience or are on the cusp of being ready. To make this deal work, Chicago will have to eat some of the $59 million remaining on Darvish’s contract. Perhaps if they keep a third of his remaining salary, the two sides could get this done.

Darvish is under contract for three more seasons, so he’d be a solid addition to the rotation while serving as a mentor for the younger arms making their way to the big leagues. Another couple of important items to note: Darvish has a career 3.71 ERA and 3.99 ERA in a combined eight starts at Petco Park and Dodger Stadium, respectively.

8 thoughts on “Padres Rumors: Evaluating a trade for Yu Darvish”