The San Diego Padres did not have an outstanding 2018 season.

One of the main culprits for this was the starting pitching. Watching players like Bryan Mitchell, Luis Perdomo, and Clayton Richard get shelled day in and day out was hard to take. Thankfully, Joey Lucchesi dulled that pain with his pitching performance in 2018.

While he wasn’t perfect, he still had a very consistent rookie year and will look to build on it in his sophomore year. Here are some positives and negatives from his season:

Amongst Padres starters, Joey Fuego was the king of strikeouts. He led the team by piling up 145 strikeouts against 43 walks, good for a 10.04 K/9 rate and a 7.9 BB/9. His 145 strikeouts were first on the team, with Richard behind him in second with 108 punchouts.

Most of it was done with his trademark “churve” pitch. In an interview with James Clark of EVT, Lucchesi said on his churve that “I just hold it like a circle change. The pressure of how I throw it gets the result. It comes off of this finger more (middle finger) and off the edge of this one (ring finger).” With his trademark pitch, Lucchesi got more than his fair share of whiffs from major league batters.

Churve has the Buccos fooled early ??

Joey Lucchesi works around two walks in the 2nd to post a scoreless frame. Renfroe, Villanueva, and Pirela due up for the Padres. #LetsGoPadres pic.twitter.com/OdQS9aIdRQ

Amongst MLB pitchers with at least 130 innings pitched, Lucchesi ranked 18th, above players like NL Rookie of the Year candidate Walker Buehler and AL Cy Young candidate Corey Kluber. If Lucchesi can keep up the strikeout rates from last year, he could be a constant fixture in the Padres’ lineup for years.

If it weren’t for a seven-run game in his second-to-last start against the Los Angeles Dodgers, Lucchesi would’ve ended the season with an ERA under 4. Instead, his ERA sat at 4.04 at the end of the season with a WHIP of 1.29.

While these numbers may not be appealing to the casual fan, Lucchesi’s advanced numbers paint a prettier picture when combined with his strikeout numbers. Lucchesi posted a FIP of 4.31, an xFIP of 3.45 as well as a SIERRA of 3.64. Lucchesi manipulated his numbers thanks to his strikeout rates, as seen by his SIERRA rate and the advanced numbers show that he was just as good, if not slightly better, than his ERA suggests.

Leaving them on base

So, how did Lucchesi strand that high a percentage of batters? For starters, Lucchesi fetched a 44.7% ground ball rate as well as a soft contact rate of 19.2%, the latter stat tied for first amongst Padres starters. With 155 ground ball outs that included 12 double plays, Lucchesi was able to get ground balls to fielders like Freddy Galvis to get out of sticky situations. 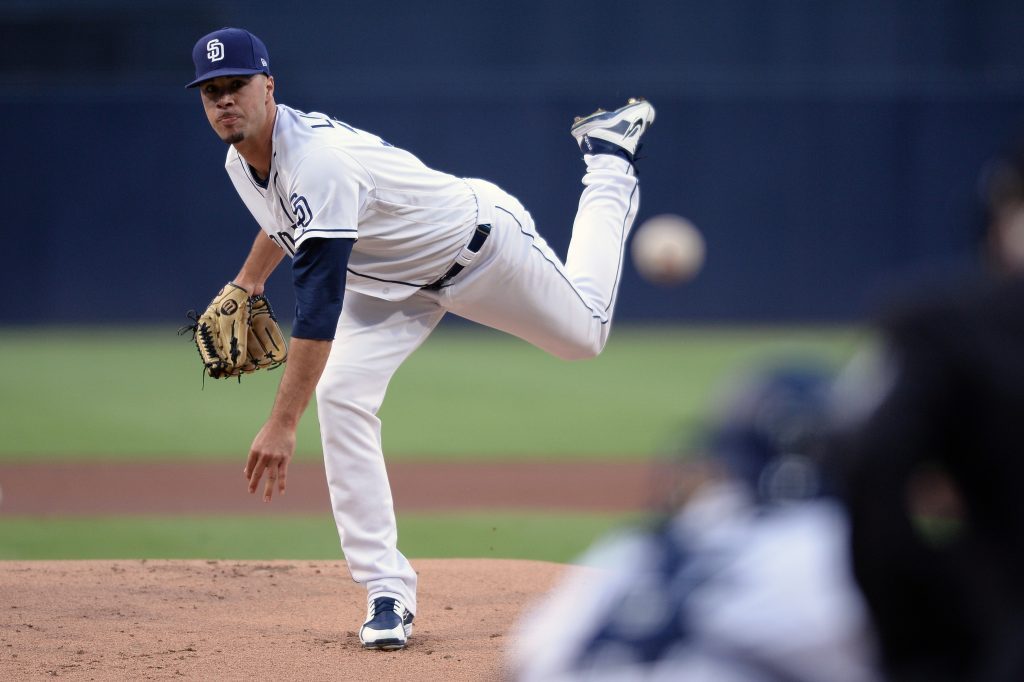 While his fly ball rate was higher than average, it was balanced out by his ground ball and soft contact rate, ensuring that runners got stranded on base and were unable to cross the plate.

The above-mentioned fly ball rate contributed to a stat that wasn’t as good as the rest of his numbers. Lucchesi got hit hard by the home run and he led the team in home runs allowed with 23. In the 26 games he started, Lucchesi allowed multiple home runs in six of them.

Such a high amount of dingers allowed is why his HR/9 rate sat at a 1.59 and his HR/FB rate at 20.4%, with the latter stat showing that 20.4% of fly balls allowed by Lucchesi went for a home run.

If Lucchesi doesn’t control the rate at which he gives up home runs, it may spell trouble for his future. However, he is still young and has plenty of time to cull the number of home runs he allows.

While Lucchesi did miss a month of action with a hip injury, this isn’t referring to injury time and is more to how long Lucchesi can last in a game. While it makes sense for San Diego to limit the rookie’s innings so his arm doesn’t fall off, he needs to start showing that he can last longer in games in his next season.

In every game started, Lucchesi failed to make it past six innings, and eclipsed 100 pitches twice. Yes, Andy Green was trying to keep his young pitcher in check to keep him fresh, but he will have to prove himself as a sophomore.

Joey Lucchesi is a young pitcher with a lot of potential. His funky mechanics and churve throw off batters and allow him to rack up the K’s, but he has to keep them from going too out of control. He still has to show that he can go farther in games and limit the home run ball, but he has all the potential to be a fixture in the Padres’ rotation for years to come.

I am currently attending San Diego State University while working on achieving a major in journalism. At SDSU, I write for The Daily Aztec while also hosting the sports radio show "Picked Off", for KCR Radio. A loyal fan of San Diego sports, I hope to bring content that you will enjoy reading.
Tags: Joey Lucchesi San Diego Padres, Padres Joey Lucchesi, Padres PNO, San Diego Padres