The “Let’s Get the Band Back Together” San Diego Padres off-season plan.

Hot Stove season arrived after the final out of the 2020 World Series, and every team instinctively sets their sights on a re-set.

Even before the smoke clears from the forest fire that is a Major League Baseball postseason, teams have contingency plans for all kinds of personnel scenarios.  Baseball Ops groups adapt previous long-range plans, recalibrating for the coming season with updated market projections and needs lists not fully known until now.

In San Diego, A.J. Preller and the Padres likely thought acquiring Mike Clevinger, for example, put the starting rotation for 2021 into the “done” pile of administrative tasks. Still, injuries to both he and incumbent ace Dinelson Lamet, as well as the tailing off down the stretch from both 2020 magician Zach Davies, and Chris Paddack, make Nellie’s nervous all across Padre-land heading into the new year.  In short, there is work to be done.

Enthusiasts watch award season come and go, imagining their team adding the most recent winners in a fantastical off-season free agent frenzy.  They follow their team with religious adoration, plotting hypothetical moves and imagining their on-paper team comes to life on the diamond.  On barstools, message boards, and comment sections, these ideas come to life, and naysayers from all corners of fandom attack any loyalist plan differing from their own, complaining that “trade simulators” and “last season’s performance” limit possibilities, but the dreamer recognizes a few lessons that online assassins commonly seem to neglect.

For one short-term example, look at the 2020 American League MVP candidate, Jose Ramirez, according to waitingfornextyear.com.  In 2020, a mere 60-game season, Ramirez posted a wRC+ of 65 in the first half of the season, rebounding with a wRC+ of 161 in the second half.  That’s almost unbelievable.  When have a Tom Brady or Drew Brees or LeBron James or had entire halves of seasons where they arguably didn’t deserve a starting role?  Can you imagine?  Baseball is unique in this.

For a longer-term example, freshly-minted National League Cy Young award-winning hurler Trevor Bauer has been up and down at best over the past four seasons.  In 2017, Bauer carded a 4.19 earned run average though a year later, he’d reduced it to a 2.21 mark, finishing 6th in Cy Young award voting in 2018.  In 2019, Bauer over-doubled that to a 4.48 clip, including a 6.39 ERA in 56 innings in Cincinnati.  But, just a season later, Bauer dominated with an ERA of 1.73 for the Reds.  He’s a volatile value paragon.

Bauer is arguably the biggest fish in the off-season free-agent pond even though he’s pitched in nine Major League Baseball seasons with a grand total of only two seasons in his entire career with an ERA under 4.19.  According to MLB Trade Rumors, Bauer will be inked to a four-year, $128 million contract this off-season despite his history.  Some organizations will see his most recent season, abandon the seven unremarkable seasons (out of eight) where Bauer was a middling starter, and bet on a reproduction of his most recent season again in 2021, incurring a tremendous cost/benefit risk.

Furthermore, some observers of the San Diego roster wanted to trade Wil Myers after 2019, even at a loss of any kind, just to get rid of the former American League Rookie of Year.  In 2020, however, he outperformed the rest of the Padre roster in OPS – including players named Machado and Tatis, Jr.  At 10th place in the National League in 2020, Myers also passed most of the rest of the National League with them in the OPS metric. These three illustrations are elementary reasons why an online trade simulator or using last season as a predictor for this season are useless: arbitrary values mean absolutely nothing outside of the context of the season.  Here ends the first lesson in player acquisition.

In baseball, value lies in the eye of the beholder because of what an organization can do with a given player.  This is a second lesson of importance for player acquisition.  Winning organizations aren’t playing fantasy baseball with static values.  Winning organizations are masters of finding treasure in other organizations’ trash, which is to say players generally thrive and flounder based on who is developing them.  In San Diego, this has been true in many cases over the years.  If the well-known examples of Fernando Tatis, Jr., Jake Cronenworth, and Trent Grisham aren’t enough, one valid example comes in the form of Kirby Yates.  Before his 2017 acquisition by San Diego, Yates carried a 5.25 ERA in listless campaigns with the Yankees and Rays.  His performance was unremarkable at best.

But, Padres staffers saw something in Yates.  His development under Padres longtime bullpen coaching stalwart Darren Balsley allowed Yates to become the best reliever in the National League in 2019.  Online trade simulators didn’t and couldn’t predict that.  Fantasy baseball managers did not draft Yates in the top five rounds as the game’s best closer for that upcoming season.  It took an eye for talent and the right developers to maximize Yates into an All-Star, who finished with a ninth-place finish in the 2019 National League Cy Young Award vote.   It never matters what a player has been for someone else; it only matters what they can be in your city, on your team, and in your lineup.  Here ends the second lesson in player acquisition.

Ideally, AJ Preller works his magic and heists more pre-arb talent that can immediately impact a major league championship roster with next to no cost.  But, without access to scouting reports, intimate details of team plans and available finances, or full understanding of minor league player values according to a given team, let’s work with free agents only in this three-fold mock of the 2021 Major League Baseball off-season.  And, let’s keep a static payroll target of $160 million, assuming the philosophy stays consistent across the board.

With these parameters in mind, an understanding of what personnel returns is needed.  The spreadsheet view of the Padres 2021 roster below is a blowup of information published by AJ Cassavell recently. It gives us a way to analyze the roster’s current strengths and weaknesses.  Reading from top to bottom by position, one can hypothesize depth per position: 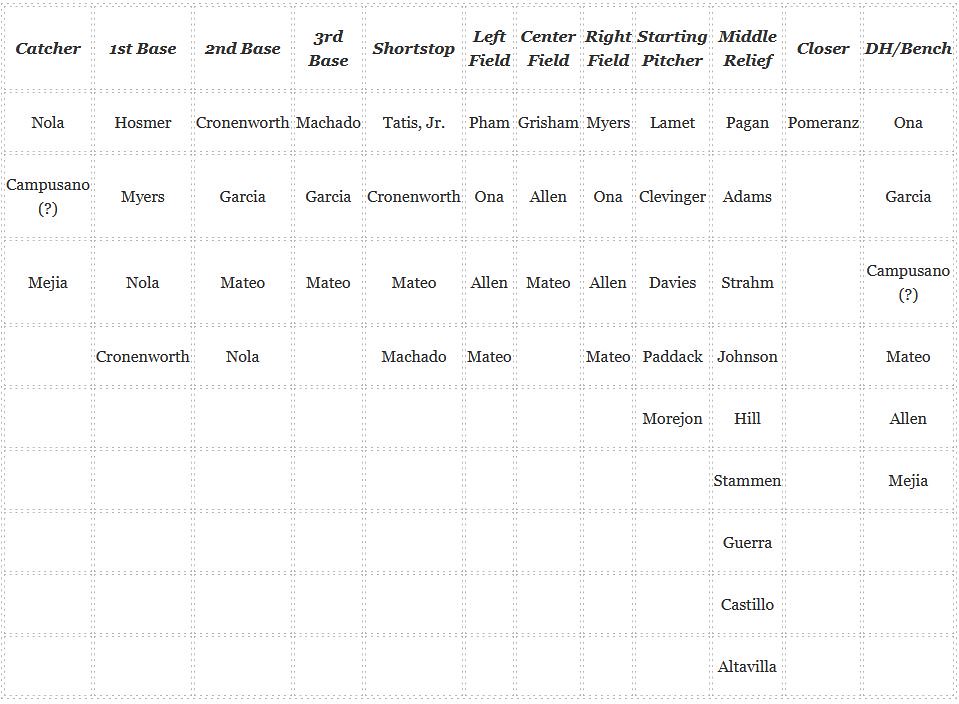 This allows rating by position in three general ways: 2020 Production, Cost, 2021 Ceiling.  A simplistic, generic continuum of (high to low) elite, above average, average, below average, and concerning allow for basic analysis of team needs.

According to the positional grid, the Padres did a remarkable job of keeping the 2020 starting lineup intact heading into 2021.  A quick review of value per position versus cost shows the Padres basically need four additional players.  By position, the Padres could use additions in left field (losing Profar), the rotation in case of injury and for big games, the bullpen (losing Rosenthal/Yates), and bench (losing Moreland).  They may need five players if Luis Campusano’s potential legal trouble puts the catching position in flux. Though there are current players who could handle a returning designated hitter position, they may choose to add six, potentially, if the DH is retained.

The Padres would benefit from lengthening the bench with a true hitter there.  It’s worth repeating: Preller and company have done a tremendous job of amassing high-performance/low-cost talent across the lineup and in the rotation and pen. In three off-season plans to be explored in the coming days, the players acquired come as a result of specific, different philosophies.  In this first plan, the goal is simple: let’s get the band back together. It subscribes to the belief that the 2020 iteration of the Padres had a legitimate chance to rise to the National League’s top and test their skills against the overachieving Rays.  Had they been healthy, San Diego may be displaying its first-ever World Series trophy.

With a healthy Lamet and fully operational Clevinger, the Padres had every reason to believe they could best the Dodgers and Braves.  In this off-season plan, the philosophy is crystal clear: re-invest as much as possible in the 2020 team and let the catharsis begin. For each position, let’s select several players worth investigating to add to the current roster without deleting any returnees as currently constructed.  Two tools offer a reasonable guess at current market values: MLB Trade Rumors Top 50 Free Agent Predictions List and FanGraphs Roster Resource Free Agent Trade Tracker.  Then, options from the free-agent market are used to make a final choice.  With a total projected current 2021payroll of $133 million, that leaves $27 million with which to operate.  Five free agent players for $27 million; without altering the current roster, that’s the task in getting the band back together.

The bullpen, comprised of several good arms that profile mostly as middle relief sans Drew Pomeranz, who had a dominating 2020, deserves the most attention.  The back end of the bullpen, long a strength in San Diego, lacks a true stopper, and swing and miss relief arms may make or break 2021.  The appealing options on the free-agent market are as follows, including their projected contract values where projections exist: Alex Colome (1/$6M), Ken Giles (?), Brad Hand (2/$14M), Roberto Osuna (?), Blake Treinen (2/$14M), Trevor Rosenthal (2/$14M), and Kirby Yates (1/$5M).  Giles and Osuna are wildcards due to health and are probably too volatile to be counted on for a full season run at the big cake.  Colome probably isn’t the quality of some of the other arms.  Treinen and Hand offer excellent talent for a similar, reasonable cost. Still, the Padres are very familiar with two options who have achieved tremendous, recent success in San Diego and may prefer to be there again, all things being equal.  Without delaying any further, for value and ceiling, the best fits for this philosophy are in adding both Rosenthal and Yates.

According to MLB Trade Rumors Free Agent Prediction List, the two year/$14 million price tag on Rosenthal seems better than fair, and though FanGraphs Roster Resource Free Agent Trade Tracker predicts a 1 year/ $7 million deal for Yates, MLB Trade Rumors expects a 1/$5 million version.  If fully healthy, that would be a steal for a pitcher with Yates’ experience and ability.  Coming off a season of, according to at least one source, an industry-wide loss of around $3.1 Billion, and with the tenor of the market potentially flirting with a movement toward a potential work stoppage, I’m projecting the low ends.  These additions would sandwich Pomeranz as a 7-8-9 fit for a champion.  Imagine a 2019 Kirby Yates handing the pill to a 2020 Drew Pomeranz, who delivers the ball to a 2020 Trevor Rosenthal.  That’s on par with any back end in the game, and these two hired guns improve the depth and quality of the existing middle relief. TREVOR ROSENTHAL, RELIEVER: 2 years/$7 MILLION per KIRBY YATES, RELIEVER: 1 year/$5 MILLION$27M-$12M=$15M

M. Robert Klemesrud, born and currently residing in the great state of Iowa, is an educator of 25 years. Having studied journalism at the University of Iowa, played baseball in the Missouri Valley, and followed the Padres religiously for over 30 years, he has found the perfect place to align some of his passions at East Village Times.
Tags: A.J. Preller, Padres, Padres 2021, Padres MLB, Padres offseason
Pages: 1 2

LF: thought Pham got stabbed, not shot, but whatever. After seeing him in the field, non-tender this player and let him take his pain-in-the-ass persona elsewhere. Do not bring Profar back. No to Eaton. It is wishful thinking to regularly bet on bounce back years. Over the last 3.5 years he has posted 4.2 WAR. That kind of production has no value, because it is too likely to be met or bettered by someone off the AAA roster. A much better fit would be Brett Gardner, although he’s likely to re-sign with the NYY. Bats lefty, can hit leadoff, very… Read more »