Once again, the San Diego Padres have found a decent arm seemingly out of nowhere as Robert Stock has been impressive for the team.

When the Padres opened spring training, it was hard not to notice the hard-throwing righty whom the Padres had signed to a minor league contract in November of 2017.

Robert Stock threw very well in those early games, relying largely on a fastball that sat in the upper nineties.

He was sent down to the minors at the start of the season, but the twenty-eight-year-old pitched well enough in two minor league stops (Double-A & Triple-A) to earn a late June call-up to the majors.

The right-hander was optioned back to El Paso on July 6th, but was recalled at the start of the second half.

In the few weeks he’s been with the team since his recall, Stock has proven himself a valuable reliever to the San Diego Padres.

Batters have benefited from a .500 BABIP, which is absurdly high and will certainly decrease over time — major league average is around .300 for most hitters, to give you an idea of where it should more realistically be for Stock once he pitches more innings. Having such a low FIP speaks to how well Stock has pitched out of the bullpen for the Padres. The most obvious reason for his success is his fastball velocity, which has been tracked by Statcast as being 97.4 mph on average. For context, Pirates closer Felipe Vazquez‘s fastball has been clocked at the same average speed. Stock’s velocity is up there with some of the most dominant relievers in baseball.

Let’s take a look at some Statcast data to see how Stock has used his repertoire to get hitters out. He tends to use his fastball up in the zone: 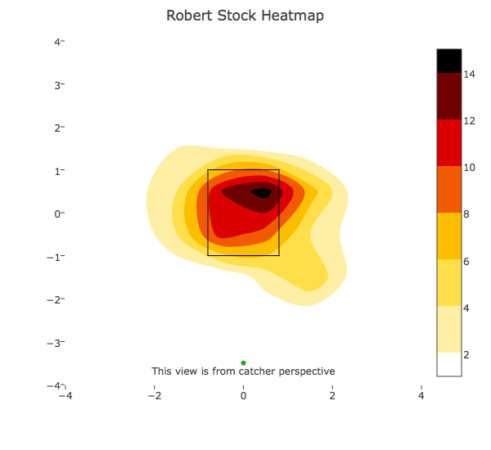 Stock has done a really good job locating his fastball up-and-away to righties, and up-and-in to lefty hitters. What Stock also does really well is change the eye levels of hitters. He does this exceptionally well because he has such a hard fastball that he throws up in the zone, which he uses along with a slider that he throws down in the zone. He’s also done a precise job of locating the slider to the outside corner to righties and burying it to lefties: 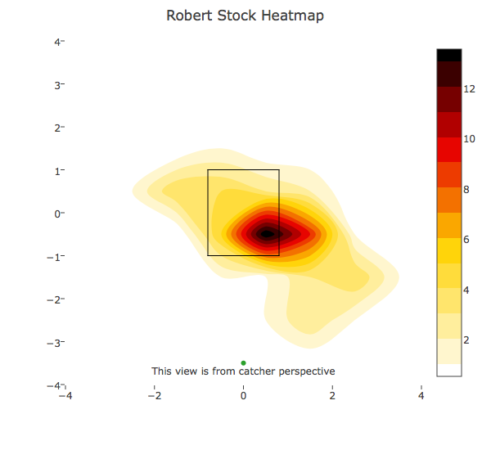 As you can see, Stock locates his slider down in the zone to that one specific location very consistently. While it’s easy to say that he’s found success simply because he throws so hard, there are obviously specific things he’s doing that are the more significant reasons for his strong showings of late. Stock has the 11th-highest K/9 Rate among relievers with at least five innings pitched, with a rate of 13.5 K/9. It’s a small sample, and he’ll have to prove he can pitch like this consistently over a longer period of time. You just can’t ignore the results so far, because they’ve been so impressive for the righty.

Stock’s contact percentage allowed to hitters is only 68.2% — recently traded Brad Hand‘s is 67.8% for context. So far, his stuff is being hit with almost exactly the same success as that of the former Padres closer. Furthermore, the hits he’s allowed this season have had an average launch angle of 6.2 degrees and an average exit velocity of 91.4 mph — which are averages that Statcast’s data tells us are difficult to get hits out of. On batted ball hit 91 mph in 2017, batters only got hits in 24.9% of batted ball events.

Another impressive part to Stock’s brief showing thus far, is the fact that he hasn’t allowed a home run. Yet it gets better, because he hasn’t even come close to allowing a batted ball to leave the yard. Take a look at his Statcast spray chart of batted balls allowed: 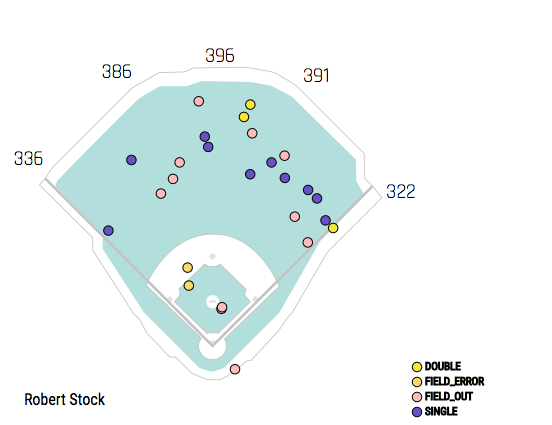 The furthest batted ball he’s given up is the red dot in straight away center field, and it was only hit 332 feet. The data all points to Stock being a pitcher who is legitimately talented at keeping hitters off-balance and makes it very difficult for them to make hard contact. He has allowed a fair number of singles, but has largely kept opponents from getting many extra-base hits. He has also hit two batters, but has yet to walk a batter so far in the major leagues. Not only are hitters having trouble making contact, but Stock is not allowing them to reach base with free passes. He’s getting results by challenging hitters in the zone.

Considering the Padres signed Stock last November on a minor league deal, it’s already a win that he’s made it to the major leagues. The fact that he’s been so useful of late for the team, only makes the move look even better for the Padres front office. Once again, it looks like the Padres have found a talented reliever for next to nothing, the same way they did Brad Hand and Kirby Yates. If Stock can continue his success, the Padres won’t be missing Brad Hand much — they’ll have simply found another gem to pitch the late innings for San Diego.

A sophomore at Willamette University in Oregon, Conrad is majoring in Spanish but is also a writing center assistant for other students at Willamette. He has been a Padres die-hard his whole life and hopes to bring comprehensible statistical analysis to the site.
Tags: Padres 2018, Padres Robert Stock, Robert Stock San Diego Padres, San Diego Padres