How has Blake Snell gone from Cy Young Award winner to one of the more unreliable starters in the Padres’ rotation?

The year is 2018. 25-year-old lefty Blake Snell enters his third big league season with the Tampa Bay Rays, hoping to build off of two solid years to kick off his career. He accomplishes this goal and more as he started 31 games and nearly won the Pitching Triple Crown. He won 21 games with a 1.89 ERA, both leading the AL, along with 221 strikeouts, tied for sixth-most in the league. That year, the voters decided that he out-performed All-Star pitchers such as Justin Verlander, Gerrit Cole, Corey Kluber and Chris Sale to win the 2018 AL Cy Young Award. And he deserved it.

Then, the 2020 World Series came along. Snell absolutely baffled one of the best teams in recent memory, the Los Angeles Dodgers. In Game 6, the Rays turned to Snell to try and force a Game 7. All he did was allow just one hit and zero runs through the first five innings. After giving up a single with one out in the sixth, Tampa manager Kevin Cash inexplicably removed Snell with just 73 pitches after he kept the Dodgers off-balance all game.

The rest is history, as the Dodgers rallied to win Game 6 off of Rays relievers and win the World Series title.

That was Snell’s final start for Tampa Bay, as he was dealt to the Padres that winter.

Fast forward to 2022, and the current version of Snell is unrecognizable. That 2018-2020 version seems like a specter, long gone. In Snell’s up-and-down (mostly down) tenure with the Padres, he owns a 4.39 ERA through a full season’s worth of starts (31) since the start of 2021. That also equates to a below-league-average 89 ERA+. His walk rate is hovering near five per nine innings, a full walk worse than his career average.

This is all while he had a stellar stretch late last year, posting a 1.83 ERA in the final eight starts of his 2021 campaign.

This year, he is yet to get it going. After a late start and an injury, Snell made just his fourth start of the season on Monday night. He threw 43 pitches in the first inning, the most by any starter in a first inning this season. He labored through four-plus innings, allowing seven hits and four earned runs to the Mets. He approached 100 pitches and was removed without making an out in the fifth.

In the 31 starts of his Padres career to this point, only eight have gone for six innings or more. For context, Joe Musgrove is yet to turn in a start less than six innings in any of his ten turns on the mound this year alone. Also, to further illustrate the “Jekyll and Hyde” (but mostly Hyde) nature of Snell’s career in San Diego, he has completed four innings or less in 12 starts, more than one-third of his appearances as a Padre.

In the same timeframe in San Diego, Yu Darvish has seven such starts and Musgrove has just three.

So what happened to the former Cy Young winner?

Historically, moving from the American League to the National League or vice versa can call for an adjustment period. You deal with a new team, new home ballpark with new dimensions, new sleeping arrangements, new routine, new opponents, and unfamiliar lineups. However, for Snell, he is 31 starts into his NL career.

He is still striking out batters at a similar clip to his Tampa days. In fact, his strikeout rate has increased by an entire strikeouts-per-nine innings from his career with the Rays. All while his rate of homers allowed has remained steady, from 1.0 HR/9 to 1.1 HR/9 in San Diego.

The loss of command and, consequently, the rise in walks have been a big issue. It seems like every start, we blink, and Snell has 70 pitches in the third inning. His “stuff” is as good as any in the league, thus the high strikeout rate. He just fails to put good hitters away when he is ahead in the count on a consistent basis. 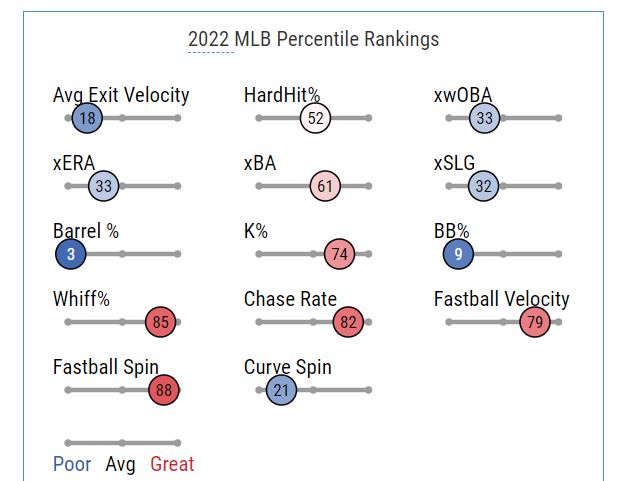 Another big difference seems to be the spin rates of his secondary pitches, especially his curveball. His curve dropped nearly 200 rpm between 2020 and 2022, going from the 40th percentile to 21st.

Thus, the biggest differences between Blake Snell, the Ace, and Snell, the Padre, are his increase in walks (or lack of control) and his curveball spin rate. Just about everything else is within range of his All-Star level days.

There has been no dip in velocity or major arm injury to suggest there is something serious going on. Snell himself admitted, it seems to be all between the ears.

What’s next for the former ace? The stuff is still there. The velocity is still there. He seems to be getting healthy and still trying to get his sea legs under him in 2022. However, this year, things are different. An argument can be made that he isn’t even the fourth or fifth best starter on the roster at this point. At his best, he is a clear No. 2 starter. Clearly, he is not at his best right now.

Time is running short. The Padres need results now and he is being consistently out-performed by his teammates in the rotation. What is there to do but hope he can regain his confidence and find that elite edge again? That’s between Snell and pitching coach Ruben Niebla, who is drawing rave reviews in San Diego. Unless the Padres feel a change of scenery, thus a trade is in order to best serve both parties. Though, nothing seems imminent.

Fortunately, the Friars have shown they are more than capable of stringing together wins without him. Of course, A.J. Preller and company would prefer to see a player that cost them a handsome fee in prospects to perform better than below league average. The Padres have not only playoff aspirations but World Series ambitions. If Snell wants to be an active part of that pursuit, such as being in a possible playoff rotation, he simply needs to be much better.

Native of Escondido, CA. Lived in San Diego area for 20 years. Padres fan since childhood (mid-90s). I have been writing since 2014. I currently live near Seattle, WA and am married to a Seattle sports girl. I wore #19 on my high school baseball team for Tony Gwynn. I am a stats and sports history nerd. I attended BYU on the Idaho campus. I also love Star Wars.
Tags: Blake Snell, MLB, Padres, San Diego Padres, Snell

He seems to consistently get ahead and then try to be too perfect for the strikeout. He’s got a great defense behind him, pitch to contact.

I am not ready to give up on him yet. What we gave away is outplaying him by far. I don’t think we’d get as much for him while he’s slumping like he is. If it goes on for his next two starts then I think they should IL him and let Niebla work with him for a couple weeks.