I wrote earlier this year that Jordan Lyles was utilizing his changeup more and slider less, therefore leading to increased results. As the season progresses however, it has become much more apparent that it is his command and his ability to pitch ahead that has put him in an ideal position to utilize his arsenal.

Eno Sarris of The Athletic opened up my eyes to the world of Command +. As he puts it, “It’s been a given in the statistical community that machines remove bias from appraisal, and that their data is therefore superior to data gathered by a human. But in this case, we’re talking about intent — which would stymy most mechanical and technological approaches, as we’ve seen.” Simply put, machines have given us a wonderful world of stats that are right at our fingertips but something like command can really only be determined by the naked eye and the wonderful people at STATS – Kyle Cunningham-Roads, Greg Gifford and Adam Whitehouse – have given baseball geeks a new way to look at how well a pitcher commands his craft.

To start with, the Padres are currently ranked third to last, just ahead of the White Sox and Rays, for team Command + at 96.6, with 100 being the average.

Thanks to Kyle Cunningham-Roads, I learned that Jordan Lyles has a Command + of 108.9, good for 35th out of 168 qualified starters, putting him well ahead of the curve of most Major League pitchers, which is a part of the reason for his early season dominance. He has shown an incredible ability to put his pitches in exceptional locations.

Another part of the success is Lyles’ tremendous ability to work ahead this season. He currently is throwing a first pitch strike 66.7% of the time, good for ninth in the league if he qualified, just ahead of Max Scherzer. A career high for Lyles who’s previous high was 62.2% when he was a rookie with the Astros.

This ability to work ahead has allowed him to utilize his most effective weapon, his curveball. Look at his strikeouts against the Rockies earlier this month:

Six of the strikeouts come on his curveball with three of the other ones coming on fastballs that changed the eye level of the hitter, expecting the curveball! You can tell by the swings, they are defensive and the timing is way off. Furthermore, every single strikeout is a pitch out of the zone, but if you watch closely, it is all by design, which goes back to his command. Every single strikeout is getting the desired effect, even the few that missed his target, did so in an effective spot that was not going to allow any further damage.

The curveball is a pitch that Lyles went away from when he spent his time calling Coors Field his home ballpark. In 2016, he threw it only 9.2% of the time, this year, he is throwing it at a 25.4% rate with the desired results. Take a look at this Heatmap that shows Lyles’ usage of his curveball when he is ahead in the count: 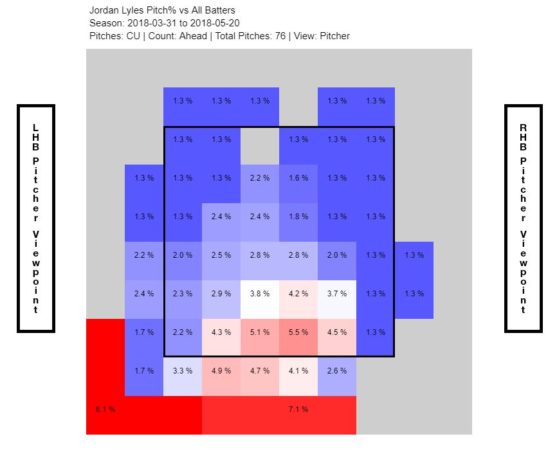 Credit: Fangraphs.com
They are in optimal positions for his best pitch, either at the bottom of the zone or outside of it, with the most telling part being where he is not throwing it. He is very rarely missing with these pitches in the heart of the plate. His ability to locate this pitch when he is ahead in the count, playing off his fastball has been a game changer for Lyles.

Jordan Lyles has always had Major League caliber stuff, it was the reason he was drafted with the 38th overall pick by the Houston Astros in the 2008 Major League Baseball Draft but it never seemed to translate to the big leagues. For Lyles, it may have been something as simple as a new understanding of his strengths or a change in venue, but either way, the results have been more than impressive and hopefully there is much more to come.

Since he was a little kid he wanted to be one of those guys at the game who had the headset on, listening to the Colonel and Uncle Teddy, he has grown out of that, but the love is still there. Padres' coverage will be biased at times, but mostly an honest dissection of the team he loves.
Tags: Jordan Lyles, Jordan Lyles San Diego Padres, Padres, Padres Lyles, San Diego Padres