It’s no secret that the beginning years of the San Diego Padres were some very lean years. Withstanding the misfortune of the woebegone years flowing through the early 1970s, there were some clear, bright spots. Nate Colbert was definitely one of those, if not the brightest.

Mr. Colbert was selected 18th overall in the 1968 MLB expansion draft from the Houston Astros. With the trade of first baseman Bill Davis in May of 1969, Nate Colbert was given the Padres starting first base job. He came out on fire, belting 11 home runs in his first 54 games. Despite missing the first month or so and a military training stint in June, Colbert still managed to hit 24 homers in ’69, which led the Padres for the season. With that, the Padres had their first power hitter and eventual true All-Star. 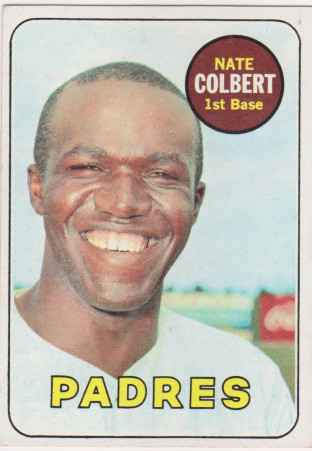 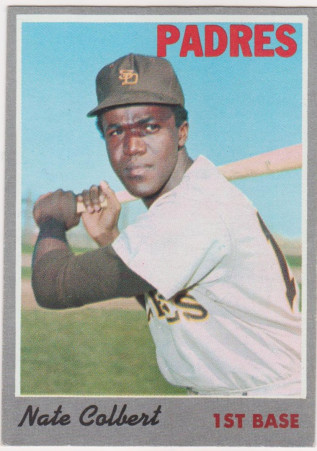 (From my collection, here are two of Colbert’s Padres issues, pre-handle bar facial hair, pictured lower.) The 1969 Topps on the left features a great smile which is representative of Colbert’s natural, easy-going attitude. Also, notice on the 1969 card is the generic aspect of the photo. It was easier for Topps to take pictures this way so as to be able to change the players team on the card at the last minute. Pictured on the right is Colbert from Topps 1970.

Nate Colbert is one of those players that the baseball gods looked down upon with a little humor. Had things been different, maybe had he played for a big market team, Colbert would have been a more prominent name that baseball historians mentioned when talking about the 70s. However, the way things turned out, Colbert was never really in the limelight despite challenging home run leaderboards and MVP final standings multiple times. In fact, between ’69 and ’72, Colbert hit 127 home runs, trailing only Willie Mays and Frank Robinson. The problem for Colbert was the company that he frequently found himself around. Throughout his career, he played for the Houston Astros, San Diego Padres, Detroit Tigers, Montreal Expos, and Oakland Athletics. During that tenure, he found himself on nine consecutive last-place teams from 1968 through 1976. Colbert played six years for the San Diego Padres, from 1969 through 1974.

Despite being a part of perennial cellar-dwellers, individually, Colbert was a standout. In the early 70s, Colbert hit among Ollie Brown and Cito Gaston. The trio was the backbone of the Padres offense. In 1970 Colbert was able to jack 38 home runs and drive in 86 runs. Keep in mind also that the Padres played in a relatively large home stadium. San Diego Stadium, which eventually would become Jack Murphy Stadium, then ultimately Qualcomm, had dimensions of Left Field: 330, Left Center: 375, Center Field: 420, and Right Field at 330. In 1972, Colbert again was able to hit 38 home runs. Furthermore, in 72, Colbert knocked in 111 runs, which was quite impressive since the ball club only had 488 total for the year. Dave Campbell, the promising infielder and future broadcaster, remarked at Nate Colbert’s power, “It is amazing how far Nate Colbert could hit the ball consistently.” (San Diego Padres Encyclopedia, Porter and Naiman, p26.) 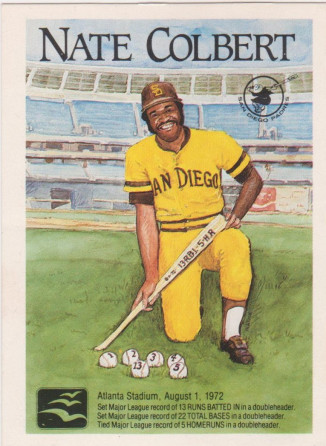 At this point, Colbert was the main attraction, offensively, but the team wasn’t attracting many paying spectators. Therefore, he and fellow teammate Clay Kirby were often considered trade bait in 1972. Surprisingly, Colbert was unable to draw what the Padres ownership thought he was worth. This is surprising because, as mentioned above, between 1969 and 1972, Colbert hit 127 home runs, trailing only Willie Mays and Frank Robinson.

In Addition to his great HR and RBI numbers, he was also elected to the N.L. All-Star team for three consecutive years (1971-73). In fact, in ’72, Colbert scored the winning run for the National League All-Stars. Most famously, on August 1, 1972, Colbert tied the major league record for most home runs in a day with an incredible five and set the Major League record for RBI in a day with 13, playing a double-header while visiting the Atlanta Braves. Colbert had 22 total bases that day!

The fifth home run of that day was against Cecil Upshaw, a right-handed reliever with a deceiving delivery. “I always had trouble against Cecil Upshaw, who threw underhanded,” Colbert offered while visiting the Hall of Fame. “For some reason, he threw me an overhand fastball [in Atlanta]. Years later, I asked him why he did that. He said that he thought he could surprise me with it… Surprise!” (National Baseball Hall of fame, http://baseballhall.org/discover/card-corner/nate-colbert). This amazing feat is what most Padre fans remember Colbert by. The RBI record still stands. The home run record tied Stan Musial’s May 2, 1954, double-header performance against the New York Giants. The irony of it all is that Colbert was actually at that game in St Louis in 1954. He was then eight years old. “I was in Busch Stadium that afternoon; I never thought anyone would equal that record, certainly not me.” (San Diego Padres Encyclopedia, Porter and Naiman, p25.)

With his persistent back problems, which would lead to his eventual retirement, and the arrival of Willie McCovey at first base, the Padres, in the offseason between ’74 and ’75, traded Colbert to the Detroit Tigers for three players. The trade ended his residency with the Padres, leaving him atop the Padres home run leaderboard. He still currently sits atop that board. Colbert, just turning 70, spends a lot of his time in Las Vegas giving private hitting lessons to young future power hitters. 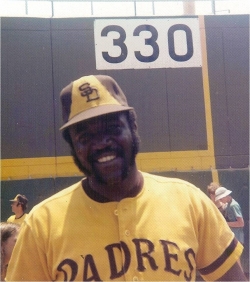 The conversation around Mr. Colbert is whether or not his jersey number, 17, should be retired at Petco Park. I think the main impetus for the yea side is that he was one of the first Padres stars, and there is some nostalgia surrounding that. He is already a member of the San Diego Padres Hall of Fame, being inducted in the inaugural 1999 ceremony. Though impressive, the 163 home run Padre record is not, in itself, justification for having a number retired unless we are going to have the same conversation of Adrian Gonzalez. If we look at Padres home run hitters of the past, Adrian Gonzalez is right behind him with 161 in the same amount of years (five). However, Gonzalez was able to achieve that number in 105 fewer at-bats.

Interestingly, if you look at home runs per at bat for the Padres, Vaughn leads the category with 13.8. Caminiti had an 16.6 ratio, A. Gonzalez. had an 18.5, Nevin 18.76, and Colbert an 18.9 average. Both Colbert and Gonzalez stand way ahead of Dave Winfield, who had 154 home runs in eight seasons and 251 more at-bats than Colbert. Some might ask, then, why Winfield? Winfield’s number was retired by the Padres in 2001, coincidentally while he was being inducted into the Major League Hall of Fame. Winfield chose to go into the Hall of Fame as a Padre, and thus the city chose to honor its first Hall of Famer with a retired number. Maybe, if Adrian Gonzalez goes into the Hall as a Padre, the Padres will retire his number too. Garvey’s number six, retired after playing five seasons with the Padres and considered more of a Dodger, is one that is questionable to many Padre fans. His post-season heroics in 1984 are considered to be the impetus of the magical season’s culmination into the World Series. Solidly, Hoffman, Jones, Jackie Robinson, and Gwynn are not debatable.

Michael Clark is a Las Vegas historian with a Bachelor’s Degree in U.S. and Nevada history from the University of Nevada, Las Vegas. He is a third generation Padres fan who has “paid attention” ever since his family returned to the states from military service in Germany in the early 1980’s. His grandparents move to Chula Vista in the 30’s where they bought a house on K Street. Both parents graduated Chula Vista H.S. in 1959. During his Dad’s tenure in the Air Force, 26 years, multiple times he, with his Mother, brother, and sister, made their home in that house. His Grandfather, Grandmother, Mother, and Father are all buried at Ft. Rosecrans, Pt Loma where they get to see every Padres home game right across the bay. It is the authors goal to bring many of the great tales from the Padres storied past to light for many of the new fans and to remind those who may have lived through it. Most articles will also feature baseball cards of the players mentioned. This gives an added peek into the past and provides some nostalgia. You can follow me on twitter at gwynn19@wcoastcapper
Tags: Nate Colbert, Padres, Padres all time home run leader, Padres Legends, San Diego Padres

Dear Nate we had a bible study in Escondido at a halfwayhouse. You siganed a ball for me & it faded. The Docter says I wont last much longer so I wanted to leave your ball to my son &Trevers&Tonys.I figure these are the best.It would great if you can help.

I don’t want to pick on an otherwise very good read, but the claim that “between 1969 and 1972 Colbert hit 127 home runs, trailing only Willie Mays and Frank Robinson” is inexact. Here’s the leaders for home runs between ’69 and ’72:

Frank Robinson had 104 and Willie Mays only 67.

Apart from that, great article. I was born after that period and did not know much about Padres history. I learned about Colbert just recently, and reading about his career, I’m surprised that he’s so little known today outside of the Padres fanbase. Coming myself from a city (Montreal) that’s considered small-market by MLB standards, and rooting for a team with a challenging history in terms of competitiveness, it’s certainly not unique to the Padres and it’s always nice when overlooked stars are getting some well-deserved exposure.