A good team plays well no matter the opponent.

The San Diego Padres haven’t found a way to beat up on bad teams while competing against equal competition. The Colorado Rockies are now winning the season matchup 8-7. That deserves repeating. The No. 23 team in baseball has a winning record against the No. 8 ranked team in baseball.

This is a massive disappointment for the Padres.

The Friars had Yu Darvish on the mound, their ace all season long. He now finishes July with an ERA over 7.00. The trade deadline has passed and the only way for the pitching to improve is to get better nearly ¾ into the season.

For Darvish, it was a matter of limiting loud contact. Four of the five hits against Darvish resulted in extra bases. All four extra-base hits turned into runs, including a home run from the opposing pitcher, German Marquez.

But the Rockies won by taking advantage of Darvish’s mistakes. They only had six hard balls off him, meaning only six balls in play were 95 mph or greater. As a team, they only had an expected batting average of .199. That is .021 lower than the Padres.

So why were the Rockies able to win this game? Was it some other factor or luck?

One nemesis in recent games has been the umpiring. In the sixth inning, that foe stuck in a rather painful way. The bases were loaded with two outs for Jurickson Profar. At this time, it was a three-run game, and an extra-base hit could have tied things up. Instead, he went down on three strikes. The second and third pitches were each called strikes. The second strike barely clipped the outside edge, but the third was a clear ball. 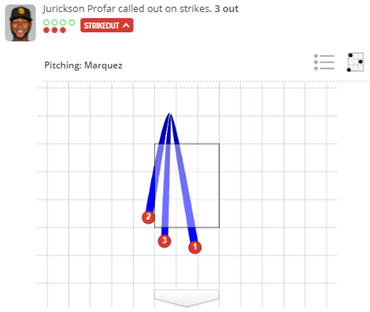 “We are a group that fights for the zone and really battles for the zone. And obviously, we are struggling a little bit. I thought tonight was extra frustrating. Marquez is extremely good and didn’t need any help,” Jayce Tingler said after the game. He was immediately ejected for arguing the called third strike to Profar. This is a battle that he has been facing for a few series now, with the umpires taking over games in big moments.

That’s a huge missed opportunity for the Padres, even if it’s on the umpire. In fact, that’s a common theme in this game, missed opportunities. Every single position player had an at-bat with a runner on base. As a team, they ended up leaving 15 of those runners on base. Going 2-for-6 with runners in scoring position.

Looking deeper at the numbers, they had the same number of hard-hit balls as the Rockies (8) and with a higher expected batting average. As a whole, the Padres played the better game. The Padres bullpen only allowed one hit while striking out six. The Rockies bullpen had an equal number of hits allowed and strikeouts at three apiece.

The most likely answer is that the Padres are simply playing baseball. This sport doesn’t always turn out how it is supposed to, even if the numbers are in the Padres’ favor. In this case, the better team didn’t come out with the win. It is easy to look back at every moment and criticize it with 20/20 hindsight. The best option for the Padres is to keep playing their game and keep fighting for every victory.

Evan is a student finishing up a degree in Finance from Northern Arizona University. The ability to break down numbers and find the story behind them has lead to his first of writing for East Village times. He covers baseball which is the sport he grew up playing and has followed even after his playing years.
Tags: Padres 2021, Padres MLB, Padres vs Rockies, Padres/Rockies