I didn’t know Tony Gwynn personally. However, my teammates and I spent some time with him one afternoon when I was a 17-year-old baseball player. The year was 1993. Here is what it was like:

Like Tony, we played our high-school baseball at Long Beach Polytechnic. It’s a school rich in sports history, including its baseball program. Poly has sent more baseball player to the Major Leagues than any other High School except Freemont in Los Angeles. Four of the ten High-Schools that have produced the most major league baseball players are in the same league (Moore League in Long Beach, California). Needless to say, league play was grueling…but also great fun due to the level of competition.

The quality of the baseball fields in the early 1990s ranged from nondescript to flat-out ratty. We played our Varsity baseball games at Blair Field in Long Beach, current home of the Long Beach State Dirt Bags. It’s a beautiful small ballpark resembling a small minor-league park. Our practice field, however, was quite Spartan (to put it kindly). Pulled up and cut through fences, hole-filled nets, waterlogged practice baseballs that weighed more than they should and regularly came apart during practice, and uncovered, chain-link dugouts. The dirt was crummy, the grass was lumpy.

And, we loved it nonetheless. After all, it was baseball.

When we got the news one day that Poly’s most famous baseball alumnus, Tony Gwynn was coming to practice—I literally felt faint in my English class. He was my hitting hero. He was, at the time, considered the best pure hitter in baseball. What an opportunity! I wondered, “That guy is a megastar…why is he messing around with us?” To this day, I have no answer except, “He was generous.”

That afternoon in 1993, our team got to here him talk about hitting, and then open things up for Q&A. It’s been nearly 25 years, but I can remember most of it quite clearly.

Through an odd set of circumstances (my fellow Jackrabbit Jose’s cajoling of both me and Tony), I got the chance to throw one pitch to him. I was so nervous I had a hard time opening my hand because the muscles were so tight. I threw…

I tailed it low and away. I mean, I dusted it…chalk flew up from the front line of the right batters box. It’s probably for the best, as he would have probably sent it into the math modules 400 feet away in right field or over the green monster in left field and into VIP Records across the street. Here are some other things I remember from that day: 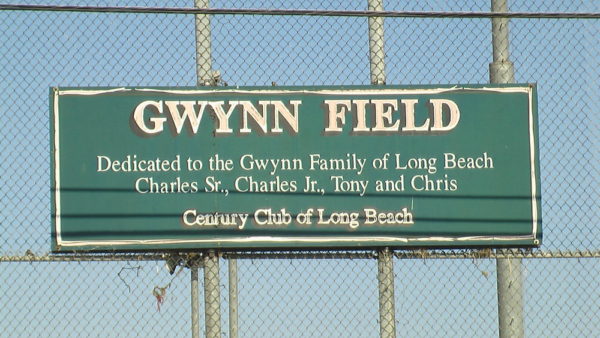 Today, Poly’s former beater of a field isn’t nearly as run down as it used to be—largely because of Tony and the Gwynn family. Today is it called GWYNN FIELD. He gave Jerseys, baseballs, and…his time. The fences are in one piece and largely covered. There is a legitimate bullpen. There are credible batting cages for a large public High-School. What a wonderful legacy the Gwynn’s have left their inner-city, alma-mater, Poly. When I have occasion to drive by my old High School, I see updated facilities and young men who play the game hard…with the Gwynn name in sight as they make every throw and take every swing.

That’s a good thing for a ballplayer. A really good thing.

I’m thankful for Tony Gwynn not only because he was an incredible player, but because he was generous—with his time, talent and his treasure. This kid never forgot him.