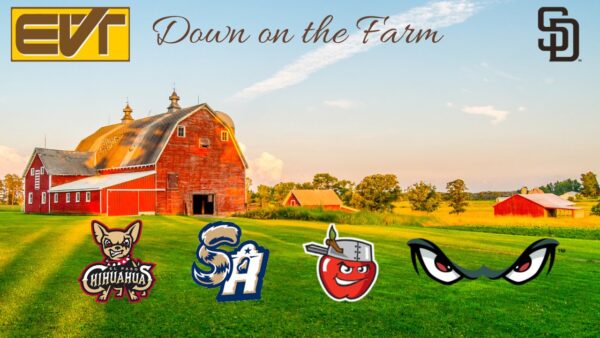 The San Diego Padres affiliates went 3-1 on the day.

Here is a recap of the day’s events.

The Chihuahuas lost another game to the Isotopes on Friday night. The Isotopes scored a run each in the first two innings before a 3-run fourth put the Chihuahuas on top briefly. Kivlehan hit his 15th home run of the season and drove in half the runs on the evening for El Paso. Oh, and Kivlehan was also named to the USA baseball team earlier in the day.

After being named to the 2021 @USABaseball Team earlier today, Patrick Kivlehan provides an Olympic preview of what's to come #ForGlory pic.twitter.com/eYcCykaxCR

Jesse Scholtens couldn’t make it through five innings and gave up six runs on six hits while being tagged with his sixth loss of the campaign. The Isotopes had a pair of home runs– one by Greg Bird, the other by Sam Hilliard— and a 3-run fifth inning put the Isotopes up for good.

The Missions once again kept the Hooks quiet. Adrian Martinez tossed six hitless innings and struck out nine batters. 44-year-old Joe Beimel came in and earned his first save with the Missions.

San Antonio Missions use dominant pitching to beat Hooks 3-1 and win 2nd in a row. Joe Beimel pitches 9th to close it out. @missionsmilb

The Missions only had four hits on the evening, but a homer by Curry and a single and RBI by Suwinski was just enough to get it done. Norel Gonzalez did the lone damage for the Hooks with a solo shot in the seventh after Martinez left the game, and there wasn’t much else for Corpus Christi.

The TinCaps lost a heartbreaker on Friday night at home. Through the sixth inning, they had a 9-6 lead and looked in full control of the game. However, a 4-run seventh by the Loons doomed the TinCaps. Four costly errors made a big difference in a one-run ballgame.

Ethan Elliott gave up six runs (five earned), and Mason Feole threw just one-third of an inning and gave up four runs in the seventh, and was tagged with the loss. Jonny Homza, Tirso Ornelas, and Seamus Curran combined for six of the TinCaps nine RBIs on the night, and a 13-hit outing went to waste.

Over the shoulder grab? ✅
Roll over the tarp? ✅
Glorious flow? ✅

This sweet snag by @emskender for the @TinCaps has it all. pic.twitter.com/0InRwDtt0f

The Storm finished out the evening with a commanding lead against the 66ers. After the Storm gave up a pair of runs in the second inning, they responded with 10 runs over the next three innings and added an insurance run (even though it wasn’t needed) in the eighth.

Robert Hassell III and Gilberto Vizacarra led the charge for the Storm, and Carlos Guarate tossed five innings in relief and shut down the 66ers, giving up just one run after a 2-run second inning.

Matthew Wadleigh, born in Oceanside and currently lives in Fresno. He lives with his wife and 2 dogs and is a sports enthusiast. Retired drummer and member of the Fresno State Marching Band. He has been a Padres fan since childhood and has suffered during the struggles just like everybody else.
Tags: El Paso Chihuahuas, Fort Wayne TinCaps, Lake Elsinore Storm, San Antonio Missions, San Diego Padres