Manny Machado continues to look like an MVP as the San Diego Padres cruised passed the Seattle Mariners 6-1.

The Padres looked solid in their very first game as the “away” team at Petco Park as they faced off against the Mariners. This series was supposed to occur in Seattle, but due to the air quality, it was played at Petco Park with the Padres being the away team.

San Diego starter Chris Paddack came into the game with something to prove.  Despite being the team’s Opening Day starter, Paddack’s recent performances had left him on the verge of being left on the outside looking in. His traditional stats are up across the board, but his underlying stats went from being outstanding last year to the bottom of the league this year.

The drop off in all the figures below could show why he is struggling. 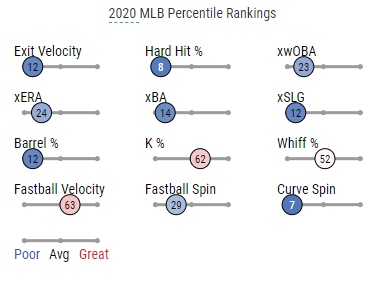 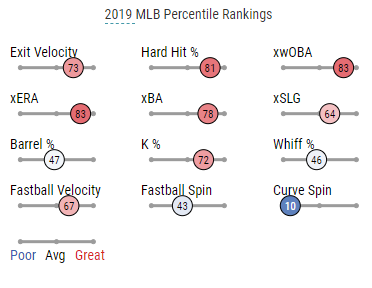 In tonight’s game, however, Paddack was different in a variety of ways. One of the most notable changes is the 11 groundouts he induced in the contest. In his six innings pitched, he only allowed one hit while walking two and striking out three, a departure from his strikeout-heavy, home run-susceptible approach in his past starts.

The 24-year-old’s opponent on the mound, Yusei Kikuchi, had problems of his own, surrendering six walks and five hits. In the third, he issued walks to Trent Grisham and Manny Machado, then allowed them to steal second and third as part of a double steal. With catcher Austin Nola at the plate, a wild pitch allowed Grisham to score from third, giving the Padres the first run of the game.

In the top of the fourth, Grisham walked up to the plate with bases loaded. Unfortunately, he could not hit one out of the park, but he did manage to score one on a fielder’s choice play. Two batters later, Machado continued his hot streak. He launched a three-run homer to left-center to put the Padres up 5-0.

Machado wasn’t done, and he was ready to make an odd moment in history. In the top of the ninth, with the Padres up 5-1, he hit a 110.7 MPH solo shot to add to the Padres’ lead. This unusual moment as a “visitor” at Petco Park only adds to Machado’s MVP candidacy. He finished the day 2-4 with four RBI and a walk. This season he has been worth every penny of his contract.

Outfielder Tommy Pham returned from the Injured List tonight after missing time with a hand injury. Penciled in as the Designated Hitter, he put a 1-3 game with a walk, his presence in the lineup marking a welcoming sight. Though Jurickson Profar has been hitting great and playing well defensively, Pham’s injury caused the DH slot to weaken. Pham’s return adds a solid bat and more versatility to the lineup.

To finish the game, the Padres brought in closer Trevor Rosenthal. He struck out two and secured the win. Since being traded to the Padres, he has not allowed a run and has struck out ten while only walking one. He will be much needed for the playoff run that the Padres about to start.

San Diego returns to action tomorrow at 6:10 p.m. against the Mariners. Though the game will be played at Petco Park, the Padres will remain the visiting team due to the excessive smoke near Seattle’s stadium.

Evan is a student finishing up a degree in Finance from Northern Arizona University. The ability to break down numbers and find the story behind them has lead to his first of writing for East Village times. He covers baseball which is the sport he grew up playing and has followed even after his playing years.
Tags: Chris Paddack, Manny Machado, Padres 2020, Padres MLB, Padres vs Mariners

Padres Down on the Farm: July 31 (Katoh 2 hits for EP/Merrill hit, 2 runs for ACL/Ornelas 2 hits for FW)

A.J. Preller and the Padres swing and miss as deadline passes

Evan is a student finishing up a degree in Finance from Northern Arizona University. The ability to break down numbers and find the story behind them has lead to his first of writing for East Village times. He covers baseball which is the sport he grew up playing and has followed even after his playing years.