The San Diego Padres are in need of another power bat in the lineup. The perfect man for the job is All-Star DH Nelson Cruz.

The Padres need more thump. There is no question about it. After Fernando Tatis Jr. and Manny Machado, there is not much reliable pop in San Diego’s everyday lineup. To compete in the tough NL West and put the disappointing 2021 season squarely in the rearview mirror, a splash signing is needed to inject juice into the sometimes-lackluster lineup.

At first glance, he might seem out of place in San Diego. First, the designated hitter is not yet in the National League. If there is no DH, he is virtually impossible to squeeze into the lineup on the field. However, there is an assumption, almost a guarantee, that the DH will be coming to the National League in 2022, whether folks like it or not. That is where Cruz fits on this squad perfectly.

First and foremost, he just mashes, despite his age. He turned 41 years old in 2021, yet he crushed 32 home runs between the Minnesota Twins and his stop in Tampa Bay following a deadline deal. That’s not all, as he is also a year removed from a stellar .397 on-base percentage in the shortened 2020 season when he finished sixth in AL MVP voting.

Usually, Padres fans roll their eyes at signing another aging slugger long past his prime who just wants to ride (or surf?) into the sunset in a stellar destination city such as San Diego. This time, it’s different. Age has not yet caught up to Cruz. It may yet soon, but for now, he’s still launching balls at an alarming rate. 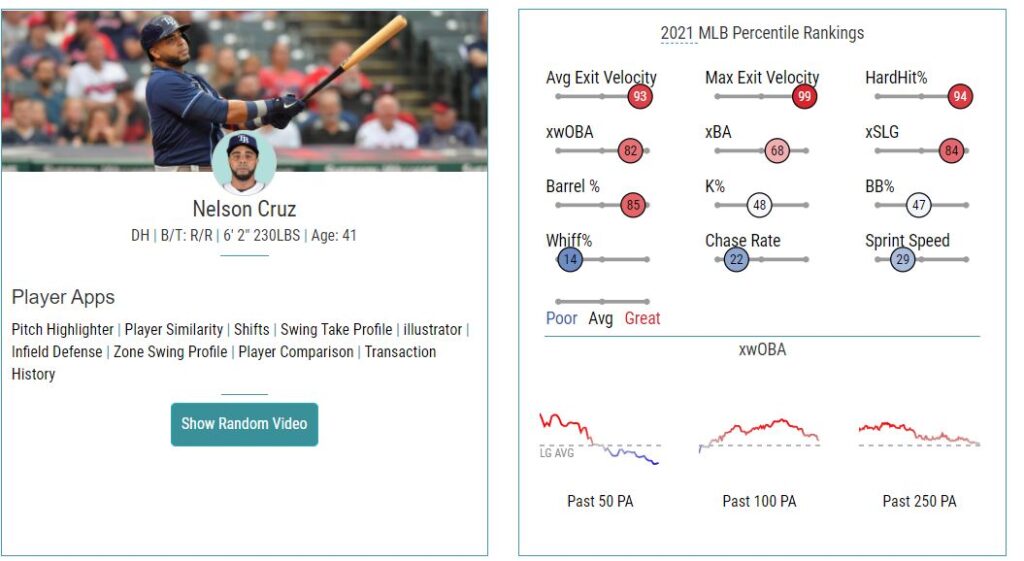 The best part is that Cruz, a free agent, likely will not command this giant, multi-year, uber-rich contract such as the likes of Corey Seager got with Texas or what Nick Castellanos would ask for. Padres fans are still hopeful the Friars will land Castellanos, an All-Star and Silver Slugger winner this season in Cincinnati, after a .939 OPS and 34-home run season.

However, if the Padres cannot land or afford Castellanos, Cruz is the perfect consolation prize. Cruz would likely take a one or two-year deal for a reasonable salary. Not only does he crush baseballs in a majestic manner few others do, but he is also beloved in the clubhouse. Being from the Dominican Republic, Cruz would be a role model and a relatable teammate for the likes of Tatis and Machado.

Machado would not have as much pressure to be the team leader, even if he has taken that role graciously. Cruz would be an instant role model in the clubhouse and a steady, calming voice. Not only that, but he has a plethora of playoff experience, as he has 207 career playoff plate appearances, with 18 home runs.

Rumor has it that multiple National League teams are interested in his services.

Many NL teams are in on Nelson Cruz. The perception seems to be that the universal DH is happening (once they get a CBA done, whenever that is).

Mike Zunino, who was Cruz’s teammate in Seattle and Tampa in 2021, stated how much Cruz’s leadership means.

“He holds guys accountable, including himself. When I was in Seattle, there were some marquee guys there. He was a guy that, when he spoke, even those guys stopped to listen. He holds a presence. He plays the game the right way. He’ll be able to teach and coach players through certain things to help them. He brings an upbeat, positive mentality that is infectious and will continue to help this team, give this team energy down the stretch.”

The Padres need a big bopper to fill the DH role, assuming it comes. Cruz is the poster child (man?) of the DH, in the best of ways. Given his clubhouse influence that could bring out the best in Tatis and Machado, along with his consistent power numbers, he is a no-brainer to be put into brown pinstripes for 2022.

Native of Escondido, CA. Lived in San Diego area for 20 years. Padres fan since childhood (mid-90s). I have been writing since 2014. I currently live near Seattle, WA and am married to a Seattle sports girl. I wore #19 on my high school baseball team for Tony Gwynn. I am a stats and sports history nerd. I attended BYU on the Idaho campus. I also love Star Wars.
Tags: Fernando Tatis Jr., Manny Machado, MLB, Nelson Cruz, Nelson Cruz Padres, Padres, San Diego Padres

Adrián González belongs in the Padres Hall of Fame

Adrián González belongs in the Padres Hall of Fame