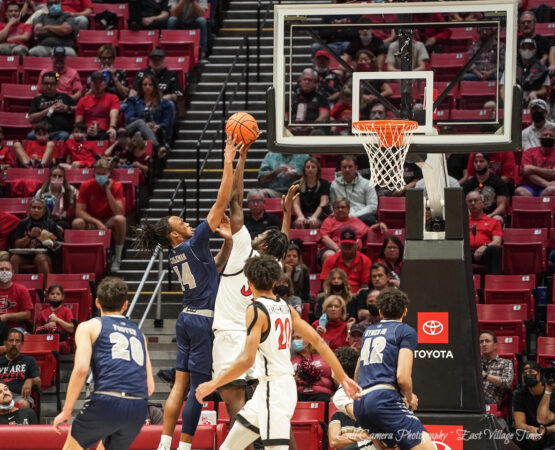 Nathan Mensah is back.

The school officially announced his return this morning. In April, the NBA released its list of early entry candidates for their June draft. Players had until Wednesday, June 1, to withdraw and return to college.

“We supported Nathan in his decision to test the waters and see what was available for him this year, but we think it is in everyone’s best interest, especially Nathan’s, to compete one more year with the Aztecs,” Aztec head coach Brian Dutcher said. “We’re very happy that Nathan has decided to come back for his bonus year.”

Mensah’s value to the Aztecs cannot be underestimated. He is the main reason SDSU’s defense is among the best in the nation. The Ghanaian center is one of the few players in the nation whose skill set turns basketball convention on its ears.

Earlier this week, former Nevada guard Grant Sherfield announced his withdrawal from the NBA draft and transfer to the University of Oklahoma. Sherfield, one of the best guards in America, was sought-after in the portal. Mensah was a matchup nightmare for Sherfield. The All-MW player frequently struggled when SDSU’s center was his primary defender.

“We were playing one-on-one with Nate, and it’s so hard to score on him,” Jordan Schakel said on the latest episode of The SDSU Basketball Podcast. “He is the Defensive Player of the Year for a reason. I got to see that up close and personal. We knew how good he was when I was a senior, but he just got so much better this last year. It was just so good to see because that’s one of the people I root for, and want him to succeed in everything he does.”

Mensah averaged 7.0 points, 6.9 rebounds, and 2.2 blocks a game last year. His 2.2 blocks every contest was tied for 30th best in the NCAA. Mensah sits third on the Aztecs’ all-time list for career blocked shots with 171.

With 29 more, he would join Leonard Allen (214) and Skylar Spencer (303) as the only players in program history with 200 or more blocks in their career. Mensah would have to average more than four blocks a game to approach Spencer’s record. Only two players in the NCAA reached that mark a season ago.

With the departure of Trey Pulliam, Mensah will have a new partner in the pick and roll. Pulliam and Mensah did not have as much success together as their talent suggested was possible. One of the storylines of the season will be how SDSU utilizes this aspect of their offense. Can Lamont Butler or Darrion Trammell unlock more easy baskets for Mensah?

If he wanted to give a medium-sized look, he could play Butler, Trammell, Bradley, Johnson, and Mensah. Dutcher could surround Mensah and the best point guard with shooters like Adam Seiko, Bradley, and Micah Parrish. His best defensive unit would likely be Butler, Seiko, Johnson, LeDee, and Mensah.

At the center of every lineup is Mensah.

Nathan Mensah is back.

My earliest sport's memory involve tailgating at the Murph, running down the circular exit ramps, and seeing the Padres, Chargers and Aztecs play. As a second generation Aztec, I am passionate about all things SDSU. Other interests include raising my four children, being a great husband and teaching high school.
Tags: Nathan Mensah, SDSU Basketball, SDSU Nathan Mensah