SDSU announced on Sunday that Jeff Hecklinski was relieved of his offensive coordinator and quarterbacks coach duties. Two causes stand out when trying to narrow down the reasons for his dismissal. Inside and outside of the locker room, Hecklinski overpromised and underdelivered. In press conferences and in person, he would speak of averaging over 40 points a contest and spreading the ball around the field. When neither of these came about, confidence in his ability to deliver these results waned.

On paper, Hecklinski’s system gave all the right answers, but his designs rarely translated to the field because he failed to develop quarterbacks who could run it. Extenuating circumstances from Covid-19 to the makeup of the QB room he inherited to the new realities of the transfer portal could excuse some of the mishaps. As the poor performances continued, the reasons began to sound more like excuses. In the end, the regression of the passing game cost Hecklinski his job.

For all the drama surrounding the offense, SDSU’s defense has been bad in 2022. The Aztecs rank 95th in the country in total defense (404.6 yards per game) and 74th in scoring defense (25.8 points per game). A clear pattern has developed. Against FBS opponents, when opposing offenses find a weakness, the Aztecs are unable to counter it.

Arizona scored on five of its first seven possessions, with turnovers the only way SDSU got the Wildcats off the field during that stretch. After holding Utah on their four opening possessions, the Utes reeled off five straight touchdown drives. This past week against Boise State, the defense shut the Broncos out in the first half before allowing touchdowns on five of six series to start the second half. Even the defense’s best outing against Toledo had consecutive scoring possessions at the end of the game. Given this pattern, the Rockets likely did not find success earlier only because their backup QB played most of the third quarter.

Friday’s contest was particularly eye-opening. The Broncos took a page out of Hecklinski’s playbook. After passing 19 times in the first half, BSU’s new offensive coordinator called four passes the rest of the game. Like the Aztecs did frequently in 2021, Boise State won without throwing the ball. If the trend continues, it will be interesting to see if Bronco Nation will enjoy boring, winning football longer than Aztec Nation did.

One thing is clear for SDSU moving forward; they need to find a new recipe for success. In 2021, they rode the strength of their defense and special teams. Kurt Mattix’ defense is not strong enough this season to duplicate that pattern.

Defensive Line. First Half: A+ Second Half: F

At halftime, the defensive grades looked to be the easiest to hand out all season. How to weigh the overall grade from the second-half collapse is challenging. The famine of the final two quarters made the feast of the opening pair feel like a different game. It is difficult to credit Boise State with adjustments at halftime because the offense simplified, returning to the only plays everyone knew Taylen Green excelled at, the read option. Garret Fountain led the team with eight tackles and one tackle for loss. Jonah Tavai added five stops and a tackle for loss of his own.

Linebackers First Half: A+ Second Half: F

Michael Shawcroft continues to play at a high level. His injury at the end of the game is something to pay attention to. Cooper McDonald’s deflection of Green’s pass on the game’s first drive set up Dez Malone’s interception. Caden McDonald did not reach the same physical and fast level from the past few weeks. The LBs are being asked to do a lot for this defense. When they play well, the defense thrives. The reverse is also true.

Safeties First Half: A+ Second Half: C

Patrick McMorris played well in his return. He was the impactful player that he was expected to be. He led the team with six solo tackles. Davaugn Celestine was right behind him with five solo stops. Celestine was also credited with a forced fumble. When the secondary is forced to make a lot of tackles, it means the offense is getting the ball to the second and third level frequently. Boise State racked up 316 yards on the ground, and their longest rush of the game was only 39 yards.

Cornerbacks First Half: A+ Second Half: B

Malone and Noah Tumblin started for the Aztecs and played well in pass coverage. Noah Avinger and Dallas Branch subbed for them, and on the backup’s first play, Boise State hit a 53-yard pass. That one pass accounted for 40% of the Broncos’ passing yards on the day. The rest of their 13 completions totaled 81 yards. With BSU’s run game finding success up the middle, the corners were unable to get involved in the run game.

With the game 13-0 at the half, SDSU and Boise State faced a similar situation in designing their second-half offensive attacks. Each team struggled to find much offense through the air. The Broncos elected to go with what they were, a strong rushing team. The Aztecs chose to try to be what they were not, a potent passing attack. SDSU threw an interception on the first play of their opening second-half drive, completely reversing the momentum of the contest. BSU reinserted their running QB and he carried them to victory.

That choice was made possible because of the different situations the offensive coordinators are in. Boise State’s Dirk Koetter, in his first game, has time to build in the passing game. Hecklinski, in his 27th game as OC, was out of time.

With the way SDSU’s defense folded in the second half, that choice likely did not make the difference in the game. The grade for the staff comes with how they treated their starting quarterbacks. Braxton Burmeister’s day ended with a blow to the head as he ran the football. With the number of designed runs, Burmeister failing to end the day on the field was no surprise.

As a policy, third-string QBs do not get reps in practice installing the offensive game plan. With Burmeister’s injury history and the inexperience behind him, the typical pattern should have been adjusted. Aumavae should have received some snaps, which did not happen according to a source, and the freshman QB was sent out against Boise State effectively blind.

Jordan Byrd started and received the majority of the snaps. He averaged a respectable 4.7 yards on 13 carries. His longest carry of the game was 16 yards. With no threat of a passing game and little help from the QB run, Boise State knew Byrd was the only player who could beat them. Chance Bell returned from injury. If he could round into the form he had in spring and fall camp; it could be a boon for the offense. 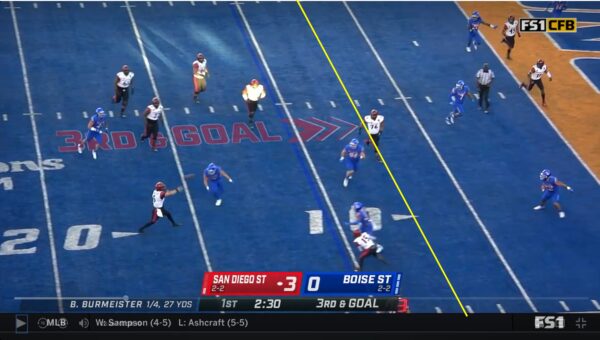 According to the NCAA rulebook, ineligible receivers are not allowed to be three yards past the line of scrimmage. In the case of the penalty called on RG Dean Abdullah that took a passing touchdown away from the Aztecs, it was, at best, a ticky-tack penalty. While Abdullah’s feet are behind the line, his body crosses it, and the rule says, “a player is in violation of this rule if any part of their body is beyond the three-yard limit.”

A rule with such a precise definition and, in this case, application on an imprecise playing surface is a curious decision. The rule comes down to a judgment call about the location of 18 inches when the original line of scrimmage is not really known. In a game where the technical definition is rarely applied, it was a bad call.

This play aside, the line gave up nine tackles for loss, including three sacks. Between those and the false starts, it was a challenging day.

While the lack of opportunity certainly factors into it, Mark Redman, to this point, has not proven to be the type of receiver tight ends need to be to find success. He has not shown the ability to make a catch in traffic or to box out the defender and present a big target for his QB. Redman was also called for a pair of false starts on Friday. On a positive note, Jay Rudolph returned from injury.

On 50/50 balls on Friday, SDSU was one for three. Jesse Matthews won one on a 26-yard reception in the first quarter. Tyrell Shavers and Brionne Penny each missed. As the passing game looks to reinvent itself under Jeff Horton, making plays is the easiest way to begin getting something from the passing game. Teams are going to stack up against the running game, and if the team is going to turn the offense around, the receivers are going to need to help out their QBs.

The play of the game for the Aztecs was the blocked punt that the stats credit to Shavers, who also returned it for 36 yards for a touchdown. Safety Max Garrison, though, was the person who set it up. Garrison lined up on the left side of the defensive formation, and when Boise State James Ferguson-Reynolds failed to catch the punt, the true freshman exploded into the punter.

An interesting note is that according to the rule book, Garrison roughed the punter. “When a player other than one who blocks a scrimmage kick runs into or roughs the kicker or holder, it is a foul.” If Garrison did not block the kick, a flag could have been thrown, but the refs were wise to let it go because applying the technical rule would have bailed Boise State out instead of fulfilling its design, which is to protect players.

Jack Browning continues to receive lots of practice punting the football. He currently leads the FBS with 36 punts and total punting yards. His 45.39 average is 18th in the nation. Browning also hit two field goals and put most kickoffs out of the end zone. The return teams did a good job bottling up the Broncos’ return game.

Following the game, SDSU head coach Brady Hoke said the staff thought the Aztecs had an advantage in the return game. That did not materialize at all on Friday. Byrd had -1 punt return yards and twenty kickoff yards. Kenan Christon looked out of place, trying to return a short kick, and only fell forward for a pair of yards.

My earliest sport's memory involve tailgating at the Murph, running down the circular exit ramps, and seeing the Padres, Chargers and Aztecs play. As a second generation Aztec, I am passionate about all things SDSU. Other interests include raising my four children, being a great husband and teaching high school.
Tags: Aztecs, Jordan Byrd, SDSU