Aztec football is around the corner. Only two days remain until thousands of fans storm into Dignity Health Sports Park to watch SDSU take on New Mexico State.

Wrapping up EVT’s preseason coverage of the squad is a countdown of the most important players if the Aztecs hope to contend for a conference title in 2021.

Stars like Caden McDonald, Cameron Thomas, Jesse Matthews, and Greg Bell were left off so far because a drop in their production would make 2021 a nightmare. Instead, this series identifies five potential stars and imagines the team’s success if they reach their full potential.

Can SDSU have the best defensive front in school history?

Banks burst onto the national scene during his sophomore season. He was on multiple all-conference teams at season’s end and posted an impressive stat line, 43 tackles, 4.5 sacks, and 13.5 tackles for loss. Fans envisioned a two-headed monster along the defensive line between Banks and Cameron Thomas in 2020, but that failed to materialize. Thomas continued his dominant play, but Banks took a step back. 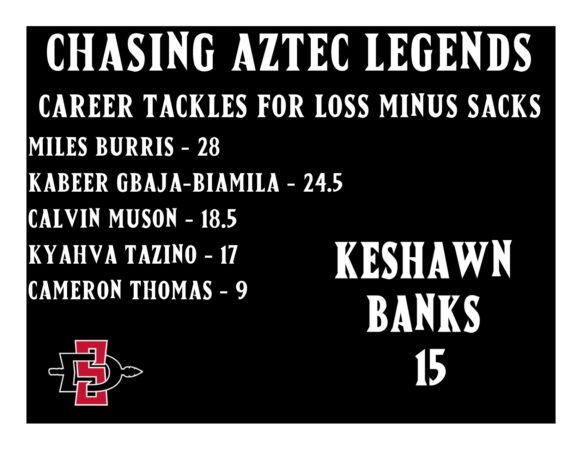 As the Aztecs enter 2021, Banks is almost an afterthought. Bookended by Thomas and linebacker Caden McDonald, there is a surprising lack of publicity for the native of Rio Rancho, New Mexico. Banks has played in 32 games and been a disruptive force, especially in the run game. As the graphic shows, when sacks are excluded, his 15 career tackles for a loss ranks right along the totals of some Aztec greats.

The front six is one of the clear strengths of the team, but it is difficult to set proper expectations for the group. They were simply fantastic a year ago, and on paper, could be even better this season. The sky, as they say, is the limit, but if they are to reach their celestial heights, they will need Banks to return to the form he showed his sophomore year.

SDSU’s three-man front is undersized, but what they lack in girth, they make up with athleticism, quickness, and a scheme that offensive linemen do not typically see. The Aztecs slant and stunt their lineman constantly, which plays perfectly into Banks’ biggest strength. He is a superbly instinctual player. In the controlled chaos created by all of the movement, Banks discerns what the offense is doing and makes plays outside of the defense’s designs.

A return to his dominant play early in the season would be a huge boon for a defense breaking in three first-time starters in the secondary. By the time conference play rolls around, these new additions should be acclimated to defensive coordinator Kurt Mattix’s 3-3-5 scheme. During non-conference play, they will need dominant play upfront to support them as they get up to speed.

Outside of the program, expectations are below where they should be for the 2021 Aztecs. This is a deep, athletic team. Inside, the team knows it should compete for a conference championship. If it is going to do so, it will need a dominant season from #2.

My earliest sport's memory involve tailgating at the Murph, running down the circular exit ramps, and seeing the Padres, Chargers and Aztecs play. As a second generation Aztec, I am passionate about all things SDSU. Other interests include raising my four children, being a great husband and teaching high school.
Tags: Keshawn Banks, SDSU Aztecs, SDSU Football, SDSU Football 2021

Padres Down on the Farm: August 9 (Tatis 2 Hits in Rehab/Kohlwey Hits for Cycle for EP)