When Manny Machado shocked the baseball world by selecting the “meager” San Diego Padres as the destination of 2018-2019’s hottest free agent, expectations were rightfully sky high. That type of contract brings an expectation of being one of the best third basemen in the league with borderline MVP production at the plate.

He came to San Diego just 26 years old, already with four All-Star appearances, two top-five MVP finishes, two Gold Gloves, and a Platinum Glove to his name from his days in Baltimore. He was highly regarded as one of the best third basemen in the entire game long before he donned Padres’ threads.

Before the ink even dried on Machado’s gaudy 10-year, $300 million deal, Padres fans’ minds went wild with the possibilities of their shiny new star third baseman. On the other hand, questions immediately arose- “how could he possibly live up to the biggest contract (then) in Padres history?” Also, the annoying “Johnny Hustle” hoopla reared its ugly (and outdated) head. Most know the history of the Padres, a franchise where star players either come to retire or underperform or both.

Allow me to answer any questions about Machado’s time in San Diego thus far, emphatically.

Manny Machado has been exactly what the Padres’ front office and fans had hoped for when he came to town on that record deal, perhaps more.

Since 2019, among National League third basemen, Machado ranks first in OPS+, second in RBI and WAR and third in home runs. The Padres could not have asked for a more productive bat out of Machado upon signing the deal.

His bat is only part of his value to San Diego. He is one of the most talented and versatile defenders in baseball. Aside from playing a Gold Glove-caliber third base, he lines up all over the diamond in the “Manny Shift.”

At times, that even meant basically playing outfield while still an infielder. Who could forget his catch against the Texas Rangers in 2020, sprinting all the way near the warning track in right field to make an over-the-shoulder catch?

Just flat out not fair.

The numbers back it up, as he is second in the NL in Defensive Runs Saved for third basemen. That’s hardly a fair assessment since he didn’t always play a traditional third base. There is an argument to be made that he is more valuable than mainstay Nolan Arenado, who stands squarely in the way of Machado earning Gold Gloves in buckets. Machado moves around the field much more than Arenado and makes plays at a larger variety of positions.

Baseball Savant charted all the outs Machado made from 2020-2021, and it’s very easy to see that Machado was just about everywhere on the field. 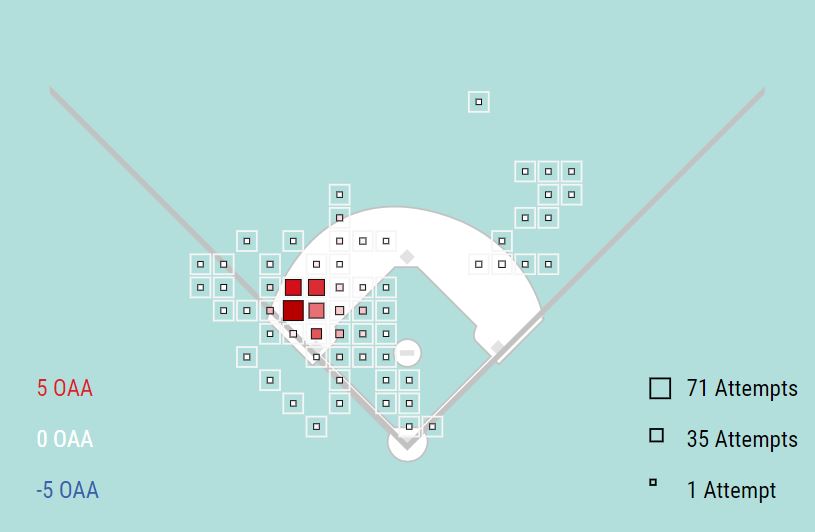 Then there is the clubhouse factor. Machado took on a leadership role, especially regarding the other Padres superstar, Fernando Tatis Jr. There was a passionate exchange in the dugout between Tatis and Machado as things crumbled down the stretch for the Padres this past summer. However, they both came out of the exchange chummy as always. Machado was able to boldly address Tatis, an international superstar, because of the strong brother-like relationship between the two-star infielders. How many of you with siblings have squabbled with one of them a time or two? It happens.

“At the end of the day, it’s: ‘Glad it happened.’ I feel like that makes us stronger. You go inside, and you talk about it, and you analyze it, and you just come together.”

Back on the field, Machado has been one of the most valuable infielders in all of baseball in the last two seasons.

It’s a wonderful sight to see San Diego’s dynamic duo up on the leaderboards like that.

Machado is not perfect, as no one on Earth is. He is not without his faults. Even so, most of the filth and shade thrown his way in the dark corners of social media is highly exaggerated or just plain false. He played hurt most of the year and showed up day in and day out. He has missed just 15 games as a Padre out of a possible 384. He lets his play do most of the talking, even if his emotions run high at times.

Machado has been as reliable and productive as anyone could have hoped for. Plus, he’s in San Diego for at least two more years before an opt-out option, plus another five if he chooses to stay.

San Diego has a gem in Machado, and he needs more respect put on his name around the league.

Native of Escondido, CA. Lived in San Diego area for 20 years. Padres fan since childhood (mid-90s). I have been writing since 2014. I currently live near Seattle, WA and am married to a Seattle sports girl. I wore #19 on my high school baseball team for Tony Gwynn. I am a stats and sports history nerd. I attended BYU on the Idaho campus. I also love Star Wars.
Tags: Machado, Manny Machado, MLB, Padres, San Diego Padres

Padres Down on the Farm: August 17 (Dixon hits for cycle, 9 RBIs in SA/Campusano and Merrill homer)

Padres Down on the Farm: August 17 (Dixon hits for cycle, 9 RBIs in SA/Campusano and Merrill homer)