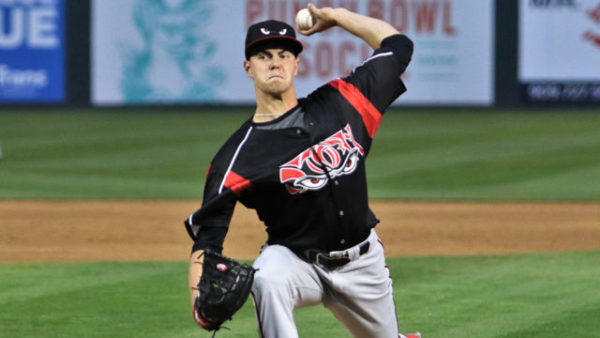 Taking a look at the San Diego Padres’ pitchers invited to spring training as a part of the non-roster invitations, including 2017 third overall pick MacKenzie Gore.

The San Diego Padres are just days away from pitchers and catchers reporting to Peoria, Arizona.

The 2020-21 offseason has been a rollercoaster for both the players and general manager A.J. Preller. Many trades have been made to put the Padres in a position to win now, but let’s not forget how Preller was able to make these acquisitions.

Since as early as 2018, the Padres had one of the best farm systems in all of baseball. In 2019, they set a record with 10 total prospects in the league’s top-100 rankings. One familiar name to Padres’ fans is MacKenzie Gore, the team’s top pitching prospect for three seasons in a row.

San Diego invited 33 non-roster prospects to Peoria, with 23 being pitchers. The list of pitchers includes 15 right-handers and eight lefties.

Returning to the Padres are 16 pitchers who have either signed minor-league contracts or are still on their rookie deal from when they were drafted. New to the organization include right-handers Nick Burdi, Nabil Crismatt, Parker Markel, Aaron Northcraft, Jacob Rhame, and left-handers Nick Ramirez and James Reeves.

Of the 23 arms arriving in Peoria, only one will likely have a chance to make the starting rotation, while a few could end up in the competitive bullpen for the Padres. Let’s take a look at some of the names that could have a chance to pitch in 2021 for the Padres while providing a quick rundown on the remaining arms.

Gore is the league’s top pitching prospect and No. 6 overall. As a lefty, Gore has a similar approach to Dodger’s star Clayton Kershaw. He has a high leg kick, and his windup is similar as well. It was expected that Gore would make his Major League debut in 2020, but the team decided it was best to keep him working at the alternate training site at the University of San Diego.

During the last minor league season played in 2019, Gore dominated High-A ball. The lefty saw an ERA at (1.02) and worked a WHIP at (0.706) before being promoted to Double-A in Amarillo, Texas.

Gore did make two appearances in last year’s spring training, with one going smoothly and the other … well, not so smooth. In his first appearance wearing a Padres’ uniform, Gore threw just eight pitches. He didn’t allow a hit and forced two groundouts and one pop fly against the Seattle Mariners. His second appearance was also against the Mariners, but this time it was different. Gore allowed three earned-runs off two hits and two walks while only recording two outs in the inning. It was nothing more than a learning experience for the former Gatorade National Player of the Year, who now he has something to build on.

Gore is expected to compete for a chance at the backend of the rotation. With Yu Darvish, Blake Snell, Dinelson Lamet, and Joe Musgrove expected to be the top-4, Gore will battle with 2020 ace Chris Paddack as well as Adrian Morejon, potentially. There also have been rumors that manager Jayce Tingler will test out a 6-man rotation, but that is unlikely. Gore will get plenty of innings this Spring as this could be the year he establishes himself.

Brady Feigl is an intriguing name to keep an eye on this spring. Feigl is returning to the organization on a minor-league deal and will compete for a chance in the already talented bullpen. The 6-foot-4 southpaw did not pitch last season but has shown signs of potential in years past. In his career in the minors (for several teams), Feigl has a (2.75) ERA, (1.20) WHIP, (189) strikeouts, and only allowing a total of (10) home runs in (213.0) innings pitched. Feigl is 30 years of age and can produce a similar approach to current Padres’ lefties Matt Strahm and Drew Pomeranz.

The Padres drafted Wilson in the 8th round of the 2018 draft, and since then, has improved tremendously. Pitching for High-A Lake Elsinore, the right-hander struggled during his first season, posting unimpressive numbers. Wilson started to find his groove just one year later and had excellent numbers through 17 games in High-A. Before being promoted all the way to Triple-A in El Paso, Wilson saw a (0.93) ERA, (0.79) WHIP, with 43 strikeouts and just four walks out of the bullpen.

Being promoted three levels won’t be easy for anyone, but Wilson proved he could pitch by staying consistent against tough Pacific Coast League (PCL) hitters. Wilson was ranked 18th in the 2020 Padres’ prospect rankings. Wilson traveled to the Dominican Republic this past winter and played for Leones del Escogido. He posted a (1.38) ERA with 15 strikeouts, two walks, and five saves in his first (13.0) innings for the team.

Wilson has a chance to compete with the bullpen this spring, but barring any injuries, he isn’t expected to make the roster for Opening Day. Wilson does have a good chance of being called up at a certain point in the season where he would make his Major League debut.

The 6-foot-3 southpaw has the skillet to be a good starter in this league. At just 24 years old, Leasher has started at least 11 games a season since being drafted and has pitched at a high level, improving every year. 2019 proved to be Leasher’s breakout season as he posted valuable numbers, earning each start. The lefty appeared in 23 games while starting 19 of them. He struck out (114) hitters and had a (3.60) ERA with a (1.27) WHIP. Leasher was awarded the CAL Pitcher of the Week on June 23, 2019.

Leasher has proven to be an innings-eater. The southpaw pitched (122.1) innings in 2019 and (118.2) innings in 2018, pitching into the seventh inning on multiple occasions. Leasher should get a few innings this spring but don’t expect him to be included in any plans for the 2021 season.

Not many remember the random call-up in 2019 where Avila started and pitched a gem against the Arizona Diamondbacks. The Padres sure do. The Venezuelan Native pitched (5.1) innings and gave up only four hits, and one earned run. He struck out five and had a WHIP at (1.13). Avila was just 22 years of age at the time, and as a matter of fact, he just turned 24-years-old on February 14.

Avila surely isn’t in any of the Padres’ plans for 2021, but Avila may be needed to make a start at some point in the season like he did in 2019. The Padres have plenty of starting pitching depth, and Avila adds to it. The right-hander was ranked 19th in the 2020 Padres’ prospect rankings.

The 6-foot-4 right-hander was ranked No. 29 in the 2020 Padres’ prospect rankings. 2018 was the year where the Padres were testing out different starting pitchers, and Nix was one of them. He didn’t perform as expected but did have a very solid debut, pitching six innings and giving up zero earned-runs against the Philadelphia Phillies. Nix’s very next start was the complete opposite. Former manager Andy Green removed him in the first inning after he had given up five earned-runs off five hits. Nix would go on to start seven more games for the Padres and finished the season with a (2-7) record with a (7.02) ERA, just (21) total strikeouts, and allowing eight home runs.

What Nix has over the other names mentioned is experience, but if those numbers don’t improve this spring, don’t expect him to get another chance.

Aaron Northcraft – The 30-year-old right-hander last pitched in 2019 in Triple-A for the Miami Marlins affiliate. Northcraft posted a (1.87) ERA in 27 games while striking out (35) and giving up just (18) hits.

Dauris Valdez – Standing at 6-foot-8 and over 250 lbs, the right-hander from the Dominican Republic has a high-grade fastball, similar to Chris Paddack’s fastball. It locates well but is very straight at times. Other than his fastball, Valdez struggles with location and has shown to walk more batters than he intends to. Valdez has a career (3.97) ERA in just under 200 total innings in the minors.

Chris is a graduate of the University of San Diego. He is the former Sports Editor for the USDVista newspaper. Chris is also an athlete and is huge fan of San Diego sports. Chris has covered the San Diego Loyal, and contributes regularly about the Padres.
Tags: Brady Feigl, Jacob Nix, Justin Lange, Mackenzie Gore, Padres, Padres Spring Training, Pedro Avila, San Diego Padres

I’m looking forward to the minor league season as well. I hope you’ll track these guys and recreate this article with updates throughout the year. I would like to see Gore have the whole season in the minors so as to fine tune the delivery he struggled with last season. A September call up to get a spot start to rest our regulars would be ideal. I am also hoping others will join him in improving this years down there. The guys you mentioned will be important contributors in 2023 and beyond. I would also like to see weathers stretched… Read more »