Ever since the July 2nd MLB International Signing Day, arguably no team has been busier, or as financially committed as the San Diego Padres.

On the first day alone, the Padres scooped up a bundle of heralded international prospects, including three out of the top six.

They did not stop there, though.

They have been constantly active since that July 2 date, signing and adding talent from all over the world.

They figure to not be done, either, as they have another four months or so to add talent until the signing period ends. Once that period ends, the Padres will be allowed to spend no more than $300k on international talent for the next two signing periods.

Of all the 20+ signings that A.J. Preller and the Padres’ brass have been able to make since July 2, perhaps none have the ceiling of 17-year old LHP, Adrian Morejon. He signed with the Padres in a deal that included $11 million dollars in bonuses.

Take a look at some video of this young man.

As I’m sure you all know, Adrian Morejon was heavily scouted for the first time in 2014 with the Cuban National Team at the 15U World Cup. In what could have been called his “coming out party,” Morejon struck out 12 in the World Cup gold-medal game, while only walking one, en route to a complete game victory. He ended up winning MVP for the tournament, which was held in Mexico.

Following that, he decided to leave Cuba with the 2015-16 international deadline in sight. This is where fortune shined on the Padres a little bit: Morejon failed to register by May 15th of 2015 (the deadline that international players must register to enter the international pool). He was not able to receive an exemption to this. If he had been able to receive such an exemption, the Giants, Cubs, Blue Jays, and Dodgers-to name a few- would have all had bidding wars for Morejon’s services. Luckily for the Padres, though, he was not allowed to enter the pool.

This allowed GM A.J. Preller some time to, first of all, convince ownership that an international splurge was in the best interest of the organization. Morejon was, by far, going to be the best pitching prospect in the 2016-17 international class that was dominated mostly by hitters. Once Preller was able to convince management, the courting process with Morejon was able to begin with the 2016-17 international signing date in mind. And, as they say, the rest is history. 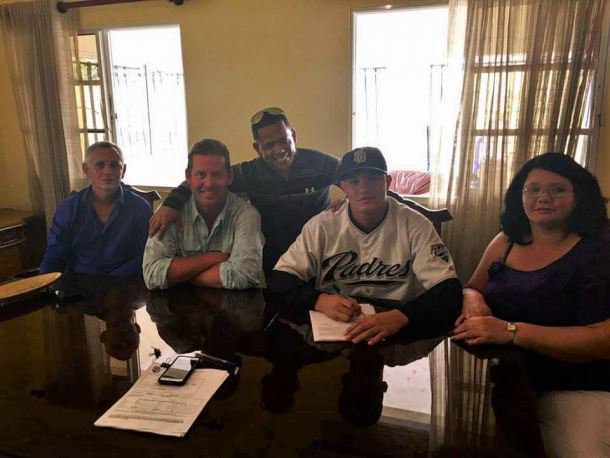 Upon signing with the Padres, Morejon was sent to the Padres DR Academy. Morejon signed a contract starting in 2017, which is why he did not report to a Padres’ affiliate. This was probably a well-thought out plan for both sides, considering Morejon had not pitched against live batters in quite a while. He then reported to the Padres’ instructional league in September.

Morejon has a four-pitch mix and sits mid-90s with his fastball, per Keith Law:

Morejon is barely six feet tall, but he is strong, with a durable, wide frame, and he throws 93-97 mph right now, with good angle to the fastball and a four-pitch mix led by a hard knuckle-change clocked in the mid-80s. He showed that he can really pitch to both sides with his fastball in instructional league, though to be fair, no player in history has ever looked bad in instructs.

Perhaps the most exciting thing about Morejon is that he just turned 18! It is not out of the question to have a 1-2 of Anderson Espinoza and Morejon. If all goes well with both, that will be pretty fun. His upside is something we can all dream about; a top-tier talent that could shoot up prospect boards FAST:

Does Adrian Morejon count as off the radar? If so, him. https://t.co/gqG6JAFILI

Pretty close. Morejon is another guy who could fly up the #Top100Prospects list in 2017. @Padres https://t.co/fAVJuuduMp

Adrian Morejon’s status as a “heralded” starting pitcher with a ton of potential was confirmed when Scott Boras signed on to be his agent. Boras does not sign just anyone. He’s an ELITE agent. Although that might not bode well for Morejon’s long-term Padres career once he reaches the bigs, it is evidence that he has a pretty large and impressive pedigree in professional baseball already.

One underrated part of the Morejon signing was that it has lured other Cuban prospects to the Padres organization as well. Jorge Ona (who trained with him), RHPs Michel Baez and Ronald Bolanos (from the same hometown), and Ramon Perez (teammate on the Cuban 15U team) have all signed with the Padres during this international signing period.

Morejon is expected to pitch in one of the Padres A-ball affiliates to begin 2017, perhaps in Fort Wayne with the TinCaps. The Padres will not rush him, as he has not pitched in actual meaningful games since he was sixteen. However, the stuff and mechanics are there. It would not surprise anyone to see Morejon have a very successful 2017, and end up joining Espinoza as a premier minor league pitching talent in the Padres’ system.