Few thought Yates would ever be considered a top-tier closer when the 32-year-old was cut by the Angels two years ago. However, the hard-throwing right-hander has reinvented himself by way of a devastating splitter, and after winning National League Reliever of the Month, Yates has become one of the most effective ninth-inning arms in the game.

Beyond Yates’s league leading 14 saves in 14 opportunities, his vital importance has been exacerbated by the Padres’ seemingly inescapable tendency to either dramatically come from behind, or blow large leads. Of the Padres 17 wins, 16 of them have come with the team leading by three runs or fewer. Consequently, Yates has seen more save opportunities than any other closer in baseball through the first month.

While each save hasn’t been entirely seamless, as his most recent save last Friday saw him walk the bases loaded, Yates has only given up one earned run across 15 innings of work. Although we remain at the point in 2019 where anything is considered a small sample size, Yates is only continuing right where he left off last season. Since Yates became the Padres closer after the departure of Brad Hand at last years’ trade deadline, Yates has posted a minuscule 2.04 ERA while posting an astounding 14.75 strikeouts per nine innings.

Having converted 23 of 24 save opportunities since becoming the Padres primary closer, only Edwin Diaz has amassed more saves. Not to mention Yates’s K/9 since becoming closer has exceeded the likes of Blake Treinen, Felipe Vazquez, and Kenley Jansen.

It cannot be understated how far Yates has come to be classified as a top tier closer in baseball. Undrafted out of community college after undergoing two Tommy John surgeries, The native Hawaiian signed his first professional contract with the Rays in 2009. However, after unsuccessful stints with the Rays, Yankees, and finally Angels — Yates was designated for assignment at the beginning of 2017.

In 2017, the then struggling and rebuilding Padres decided to take a chance on Yates. However, after amassing a 5.38 ERA and 1.47 WHIP in almost 100 career innings, it was clear that if Yates couldn’t perform for the Friars, this could have been his the last stop of his major league journey.

Knowing the stakes at hand, Yates made a risky career decision that has turned into the key to his success — abandoning his slider for a newly developed splitter.

This decision would pay dividends for Yates, as the more he began to rely on his splitter, the better his run prevention and strikeout numbers became. 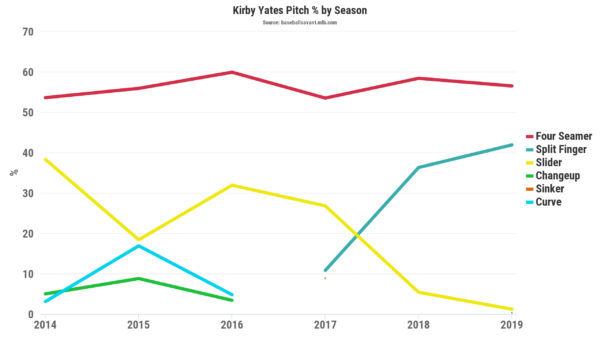 In 2019, Yates’s splitter is more polished than ever. According to Baseball Savant, hitters are chasing balls thrown out of the zone by Yates at a comparable rate to that of Aroldis Chapman and Josh Hader.

Yates’s effectiveness has not just been a blip in the radar. His splitter has developed into a true put-away pitch, and if Yates continues to show no signs of nerves in the ninth inning, the 32-year-old will be on his way to his first ever All-Star Game.

However, the only concern moving forward is Yates’ workload. Yates is on pace to shatter his previous career high for innings in a single season, and questions of health and durability will undoubtedly surface later in the season if the Padres continue to win in such dramatic fashion.

Therefore, if the Padres hope to make a playoff push in 2019, Yates needs a break. Win some games by 4-or-more runs, will you?