The NFL is a very technical industry. Desired outcomes are pursued by a near-religious pursuit of particular inputs. Positions, for instance, are determined by the size, height, and speed of the players. It is very difficult for individuals outside the type NFL teams are looking for to make it onto league rosters.

If anyone deserved a chance to break the mold at running back, it was SDSU great Donnel Pumphrey. In 30 of his final 41 games at SDSU, the NCAA all-time rushing leader carried the ball 20 or more times. In total, he wracked up 1,059 attempts in 54 games. Including his 99 career receptions, he averaged more than 21 touches a game over his career. His 6,405 rushing yards and 7,444 yards from scrimmage are both NCAA records.

There should have been zero question about Pumphrey’s durability but stuck in their paradigms, NFL teams did not have the vision or creativity to see beyond their systems. Even after using a fourth-round selection, the Philadelphia Eagles only gave him 38 preseason carries over three seasons from 2017 to 2019. Pumphrey, despite his exploits as a college running back, had to be the next version of Darren Sproles or nothing else.

As current running back Jordan Byrd enters his final season on the Mesa, he would be wise to pay heed to the journey of his Aztec forbearer. Byrd came to SDSU from Albuquerque, New Mexico, in 2018 and has been the most explosive player on the team in that time. 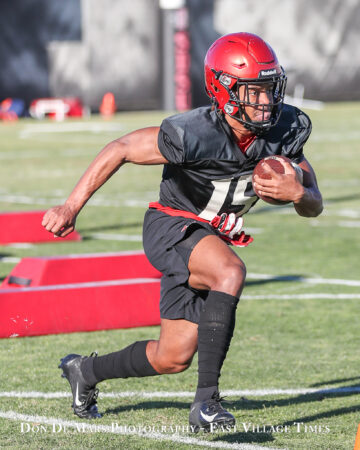 “Oh yeah, most definitely,” Byrd said on episode 24 of The SDSU Football Podcast. He was responding to a question on if the running backs will be used more in the passing game. “Our quarterback, he’s going to be really good for us. He’s going to get the ball around, especially with his feet. He’ll be running as well.  I feel like all of our skill position players are all speed. We’re all fast and stuff, so that’s what really going to help us get the ball moving around … That’s one thing we’re going to do is excel on offense this year.”

In contrast to Pumphrey, however, Byrd’s opportunities have been limited at SDSU. Including kickoff and punt returns, he had 35 total touches in 2018, 122 in 2019, 61 in 2020, and 99 in 2021. 10% of his touches resulted in explosive plays last season, including a 100-yard kickoff return for a touchdown against Utah and three rushes over 40 yards.

With the departure of Greg Bell to the NFL, Byrd is listed first on the depth chart at both running back positions on the post-spring depth chart. Even with the addition of USC transfer Kenan Christon, Byrd’s usage in SDSU’s offense should increase significantly. The way he is utilized will determine his draft status in 2023.

“He’s on the radar, but the size issue will be tough to overcome. He enters the season with a free agent draft grade.” Dane Brugler of The Athletic told EVT.

Byrd is exhausting his eligibility at an adventitious time. Unlike Pumphrey, who entered the league where smaller RBs were only third-down backs and special teams players, Byrd fits one of the en vogue player types. There are 35 offensive players on 21 different NFL teams who are under 6 feet tall and weigh 185 pounds or less. 17 of those 35 entered the league via the draft. Players from that group were selected in every round. The remaining 18 were undrafted free agents. 33 are listed as WRs and 2 as RBs.

On the field, the 35 NFL players could be categorized three ways. There are some who are legit receivers, others who are special teams stalwarts, and those who have yet to earn consistent playing time. The players making an impact on the field are great role models for Byrd to style his game after. They also provide SDSU Offensive Coordinator Jeff Hecklinski and his staff with ways to maximize Byrd’s big-play potential.

Miami Dolphins WR Tyreke Hill is a prototype for this position. Particularly adept at crossing routes, double moves, and in the RPO offense where he can utilize his quickness and speed, the Chiefs use him in a variety of ways.

Hill is Bryd’s favorite current player because of their similar builds and athletic traits. If SDSU can figure out how to make Byrd resemble Hill on the field, 2022 is going to be a special season.

On paper, Hill’s role in the NFL is the position BJ Busbee manned for years at SDSU, and TJ Sullivan is currently listed as the starter at. The Aztecs’ depth chart does have a second running back, who basically fills the same position. It is unfair and unrealistic to expect Byrd to replicate Hill, but if he can show potential as a receiver down the field, it could entice an NFL team to use a draft pick on him.

Byrd says he is a threat all over the field. The running backs have been running routes with the receivers and new QB Braxton Burmeister. Burmeister has only been with the team for a short time, but Byrd says the team’s chemistry makes it feel like he has been at SDSU “forever.”

In a sign of the evolution of smaller players in the NFL, only a handful of the 35 players are currently their team’s primary returners. Once the niche for these types of players, more are finding roles in the primary offense. The Cleveland Browns Jakeem Grant is among the notable exceptions. Throughout his brilliant career, the 5’7” 171 WR has 110 kickoff returns and 119 punt returns. He also has 100 career receptions.

If there is an obvious NFL fit for Byrd, it is in this phase of the game. Byrd won two all-conference awards a season ago. He was First-Team All MW as a kickoff returner and a Second-Team All MW as a punt returner. Byrd will need to build off his 2021 season to catch the eye of NFL talent evaluators. Most of the players filling this role in the league started their careers as undrafted free agents.

J.J. Taylor is a 5’6” 185 pounds running back for the New England. The Patriots have thrived as the NFL’s avant-garde for years and may be heading the next evolution as the RPO becomes more universal. Employing a smaller back would make it more likely teams will keep their free defenders outside to stop the pass.

In this scenario, the offense would have equal numbers in the box, and the challenges that held smaller players from playing the position would be mitigated some. Smaller RBs have always thrived when teams run draws, and with the RPO spreading the defense out, there could be space on the field and on NFL rosters for dynamic backs of smaller stature.

Byrd has been at his best in the backfield. 150 carries for the Aztecs next season are probably the most direct way for an increased role to materialize. If he can prove to be a durable playmaker with five times the carries as he had a season ago, it could raise his value because he would be more than just a special teams player.

My earliest sport's memory involve tailgating at the Murph, running down the circular exit ramps, and seeing the Padres, Chargers and Aztecs play. As a second generation Aztec, I am passionate about all things SDSU. Other interests include raising my four children, being a great husband and teaching high school.
Tags: Aztecs, Donnel Pumphrey, Jordan Byrd, SDSU, SDSU Football