Although Padres’ fans were somewhat inclined to hit the panic button when Dinelson Lamet went down with an elbow injury, there was a silver lining.

Lamet’s move to the disabled list meant an open spot in the rotation. It was originally thought that left-hander Robbie Erlin would fill that spot, but on Thursday the Padres announced that 2016 draftee Joey Lucchesi would make his MLB debut on Friday night against the Milwaukee Brewers.

Not only is Lucchesi the first pitcher from that draft to make his big league debut, but he is also the second A.J. Preller draft selection to make his way to the big leagues.

It was unclear how Lucchesi would fare in his first big league outing, but there was definitely a buzz within the Padres’ Twitter/online community. I say Twitter community because the average fan probably wasn’t very knowledgeable about Lucchesi.

For those unfamiliar, Lucchesi kicked off the 2017 season pitching in Lake Elsinore on opening night and finished the season pitching in Double-A for the San Antonio Missions. In 139 minor league innings in 2017, Lucchesi posted a 2.20 ERA with 148 strikeouts to just 33 walks. To say he was an impressive was an understatement. Despite being surrounded by the likes of Cal Quantrill, Eric Lauer, Jacob Nix, and others, Lucchesi clearly stood out as head and shoulders better than his competition. With that performance, it seemed like it was only a matter of time before Lucchesi would make his way to the big league rotation.

Fast forward to Friday night, March 30, and Lucchesi did just that. All told, Lucchesi got through four and two-thirds innings, striking out one batter, walking none, and giving up three earned runs in total. Despite a bit of a rocky start, Lucchesi was able to settle down a little bit until a fifth inning jam pushed him from his start a little earlier than he hoped.

Lucchesi got off to a shaky start right in the first. 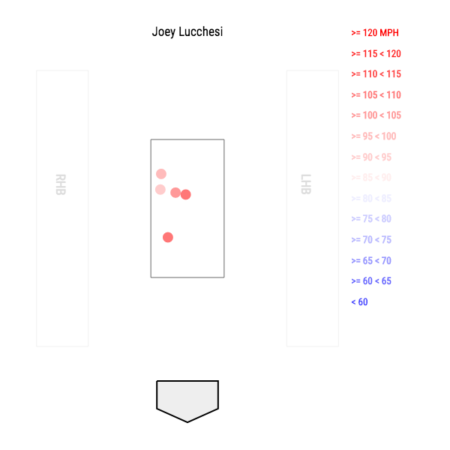 Although only two runs crossed the plate, Lucchesi gave up five balls in play that left the bat with an exit velocity of at least 90 mph, including three over 100 mph and one just shy of 100 mph. As you can see from the chart above, all five balls were clearly missed spots.

The second was slightly better for Lucchesi, who got out of the inning unscathed despite giving up three more balls hit over 85 mph, all on pitches right in the heart of the plate. Lucchesi gave up two more balls in play over 95 mph in the third inning and one more in the fourth. Things got even worse for Lucchesi in the fifth inning, when he gave up two more balls hit with an exit velocity over 100 mph and another over 90 mph before being pulled from the game with two outs in the fourth. 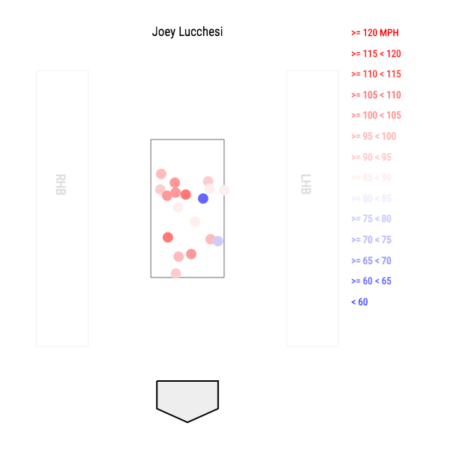 That’s a lot of hard contact for Lucchesi, and it seemed like he was pretty consistently missing his spots all night, and on all his pitches. To put more clear numbers on it, over 85 percent of the balls put in play against Lucchesi last night were either medium contact or hard contact, with an even split between the two. Lucchesi’s breakdown was 64 percent fastballs, 25 percent curveballs, with only 10 percent changeups.

The big thing that stood out was that Lucchesi had trouble missing bats on pitches inside the zone, with a near 85 percent contact rate on pitches in the zone. When he was throwing pitches over the plate, more often than not the batters were making good contact. 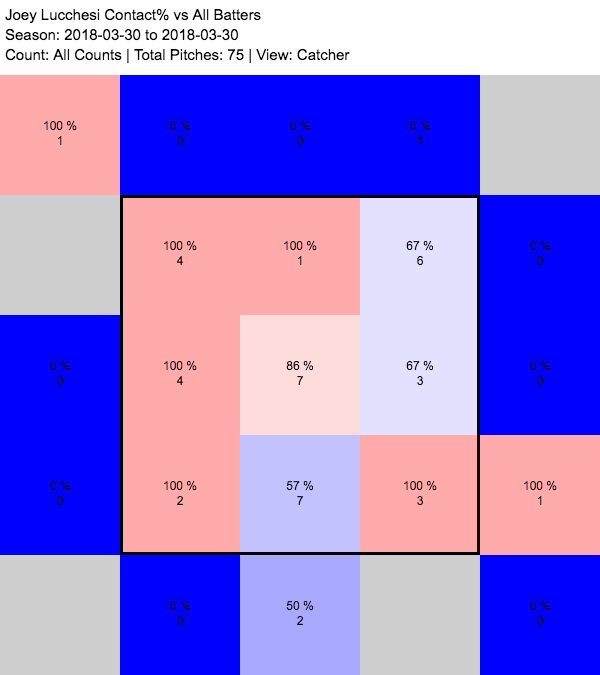 However, there was a positive side to that, as Lucchesi was able to get nine swinging strikes on the night, including quite a few on the plate. Throughout the night, Lucchesi clearly had some trouble with leaving too many pitches over the zone and he ended up getting hammered on those. By comparison, Clayton Richard was able to have solid success against the Brewers on Opening Day because he hammered the strike zone with pitches down in the zone. By contrast, Lucchesi left way too many pitches elevated in the middle and upper third of the zone. 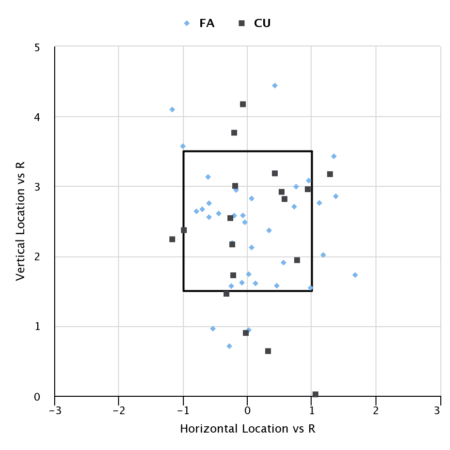 All told, it wasn’t a dominant performance for Lucchesi, but he did get the first one under the belt. However, this just goes to show that for a guy like Lucchesi, who operates on deception and pitch location more than raw stuff, missing spots can be deadly against a capable big league lineup. It will probably take a few starts to really get a good assessment of Lucchesi, but it will be interesting to see how Lucchesi adjusts in his second big league start next week. For now, he can say that he is a big league pitcher.