Antonio Gates finished his professional football career in 2020 as an eight-time Pro Bowler and a five-time All-Pro.

In three years, he will undoubtedly become enshrined in the NFL Hall of Fame. Quite a feat for a player who did not play football in college.

After initially enrolling at Michigan State to play football and basketball out of high school, Gates’ dual-sport plans took a hit when the Spartan’s head football coach at the time, Nick Saban, told him he could only play football at the school. Gates, wanting to play basketball,  transferred out of Michigan State to two different schools before landing at Kent State for his final two years of college and earning All-American Honorable Mention by the Associated Press in his senior season.

Gates’ professional basketball dreams floundered when he went undrafted, forcing him to revert back to his football pedigree and catch the eye of the San Diego Chargers in a private tryout. The rest, as they say, is history. 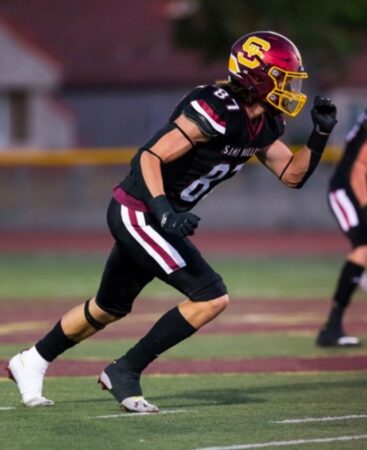 Jimmy Cunningham, a senior at Simi Valley High School, is looking to make a similar shift from basketball to football, albeit at an earlier stage in his career. Cunningham (6’5” 215lbs.) played four years of Pee Wee football before deciding to focus solely on basketball entering high school.

Jim Benkert, head football coach at Simi Valley, noticed Cunningham’s size, length, and athleticism on the basketball court and recommended he play football for him. Benkert felt this was Cunningham’s best way to attract college recruiters.

Cunningham took Benkert up on his offer and played in his first high school football game in the abbreviated COVID Spring 2021 season. In five games as a defensive end, he only collected 11 tackles and one tackle for loss and did not make it on any college recruiting radars.

Focused on football for the first time in his life, the Simi Valley defensive end dedicated himself during the offseason, and his hard work paid off. He turned in a stellar senior season, recording 57 tackles and 20 tackles for loss in 11 games, including a school-record ten sacks. The Pioneers finished the regular season undefeated and won the Canyon League title.

“I would like to think with me only starting in 14 varsity games and putting up stats like I did that, coaches would see it that I have a lot of room to grow,” Cunningham told EVT in an exclusive interview. “If I’m already earning All-Ventura County and Defensive MVP after one year, the sky is the limit [for me].”

Recruiting slowly started to pick up after the season, earning offers from Benedictine College and Northern Arizona in January 2022. Cunningham received an invite to the West Regional Showcase Football Event on January 23 and excelled in the workouts, earning Defensive Line MVP. “Being named as a Defensive Line MVP at the camp showed that I can play at the top level with other highly-ranked recruits,” said Cunningham. 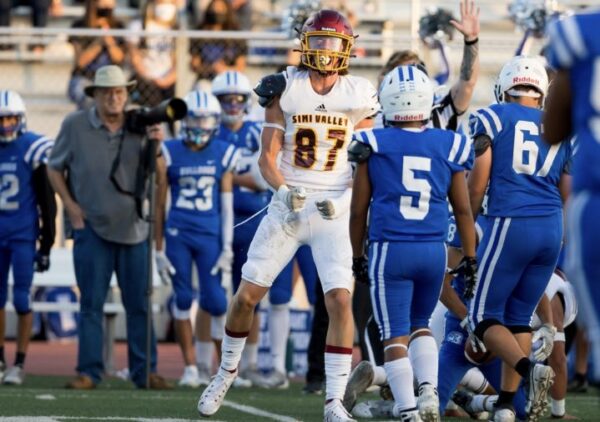 “What stood out to me was his motor,” Keith Miller, creator of Showcase Football, told EVT. “He was relentless during drills and team periods.”

A relentless motor is a term used frequently to describe a recent college football player who looking to get his name called early in the 2022 NFL Draft: former Aztec Cameron Thomas. The similarities between the two are striking, as Cunningham’s high school tape shows a tall (same height as Thomas) and lanky edge rusher with the speed to turn the corner or chase down tailbacks on the outside.

At only 215 lbs, Cunningham will need to add weight to get on the field as a defensive end at the collegiate level. Thomas came to San Diego State weighing 235lbs as a freshman but quickly bulked up to 260lbs by his second year in the program.

“I really like [Cunningham’s] size and frame to build, and he can easily [get to] 250 pounds,” said Miller.

Despite the accolades and recognition, Cunningham’s recruitment stalled for the past two months as he headed into his final weeks as a high schooler without a commitment. “The reason I haven’t signed to a school yet is because I have been waiting to receive an offer from a school that I would really enjoy and could see myself playing there,” he said. “I really want to be under the right coaching staff to be able to reach my full potential for the upcoming crucial years of my career.”

That right coaching staff could be San Diego State, who started reaching out to Cunningham in early March. On April 7th, the Aztecs, “a dream school” for Cunningham, made an offer to the Class of 2022 player.

“I really love the location and everything that the program has to offer, especially coming off a monster 12-2 season,” he said. “Coach Deakin has been very helpful in the recruiting process. He has been giving me and my family a lot of information about the school and the team.”

Similar to Avery Iosefa Hart last year, Miller believes SDSU is a great fit for Cunningham. “He is a high-end developmental player,” he said. “If he can add the necessary weight to hold the point and set the edge, he could be a two-year All-Conference player in the Mountain West.”

Cunningham will visit campus on April 18 and hopes to make a decision shortly thereafter. Committing to a San Diego football team could set him on a trajectory that parallels Antonio Gates’ exemplary career.