Can Kirby Yates keep up his tremendous value for the San Diego Padres?

Being that good can’t be a fluke, right? Well, reliever success is highly volatile, and consistent success hard to come by outside of the elite. Even looking to Yates’ career thus far, one can see the wild variation. 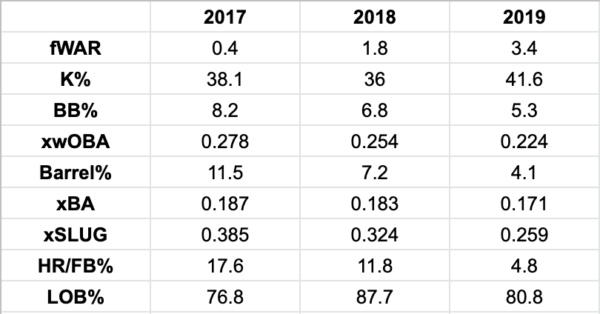 There are some clear outliers for the 2019 season, all of which are heavily influenced by the amount of good contact Yates gave up, exhibited by lower xwOBA, lower barrel rate, lower xSLUG%, and a lower HR/FB%. Okay, he was better because he gave up less of the best type of contact. That makes sense, but to find the answer as to why he gave up worse contact, let’s look to see if there are glaring differences in the things that Yates can (at least somewhat) control: velocity, spin, movement, location, and pitch selection.

Yates has never been a flamethrower by any means, with his highest average 4-seam velocity clocking in at 93.9 MPH in both the ’17 and ’18 seasons. His 4-seam velocity in ’19 was actually down a hair from ’18, sitting at 93.5 MPH in his best season. The velocity on his best and essentially only other pitch – the splitter – also came down from ’18 as well, falling from 87.3 to 86.3 MPH. I’m disregarding his slider, since Yates has seemed to abandon it the past two years, throwing it only 54 times in ’18 and nine times in ’19 (an interesting note to explore later).

Next to examine would be the spin on Yates’ pitching throughout his San Diego tenure. My reasoning for examining spin was to see if there was something in particular that the Padres changed about one of his pitches; perhaps a different grip or a new pressure point to hone in on upon release, which would affect spin and spin axis. Using Baseball Savant, I looked at the average spin rates of his arsenal over the past three years. As shown below, the only significant difference would be the average spin on his splitter, increasing 8.9% from ’17 to ’19.

However, raw spin totals only say so much, what we need to do is look at the movement of Yate’s pitches to see if the change in spin on his most effective pitch contributed to its movement profile in any way.

Knowing that the movement was better, now let’s look at the pitch location. As shown below, his splitter location has largely remained unchanged, staying low near the middle of the zone. However, his 4-seam location has shifted lower and more inside to righties and outside to lefties, closely mirroring his splitter, making both pitches that much more effective.

Regarding pitch selection, it seems like he’s all but abandoned his slider, and hasn’t thrown a sinker since 2017, the worst year of the three years he’s been with the Padres. Essentially, he’s been a two-pitch pitcher since 2018, when he started his path to becoming a weapon, ditching his sinker and his slider, his two worst pitches. The mantra goes something like, “throw your really good pitches more and your bad ones less or not at all.” Drew Pomeranz, new Padres ace reliever, also took that approach last season in the pen with the Brewers, but that’s a conversation for another day.

What’s ahead for Yates is unknown. With COVID-19 cutting the baseball season short and sustained reliever success hard to replicate, to say Yates is going to have another career, even on a rate-basis, would be a bold prediction. ZiPS and Steamer projections both pegged him at 1.1 and 1.0 fWAR for the 2020 season (assuming a 162-game season). However, if he can keep the good contact to a minimum and maintain his pitch movement profiles, it would be completely reasonable to say that Yates will be a top-five reliever going forward whenever baseball resumes.

Aaron is a college student who loves baseball, writing, and learning. The game has been with him ever since he first threw a ball at the age of three, and his love for it has only evolved since. He is married to his beautiful wife, Jessalyn, and they share their home with their cat, Louise, and their dog, Lexi.
Tags: Kirby Yates, Padres 2020, Padres Kirby Yates, Padres MLB, Padres Yates, San Diego Padres, San Diego Padres Yates

Won’t matter because he’s a FA after this season and we won’t contend in 2020 with or without him. I don’t see him signing any extension either. He saw what happened with Seth Smith, Yan Solarte and Brad Hand. I think he’ll want to choose who he plays for rather than being told who he plays for.