By now, we’ve pretty much all seen Clayton Richard‘s pitching fall off during the second half of this season.

His ERA of 5.33 doesn’t lead to much confidence regarding his future in the Padres’ rotation, and neither does his 3.4 BB/9 ratio.

Richard was good enough in the first half to justify having around, pitching to a 4.43 ERA and throwing an impressive 124 innings.

We weren’t thrilled to see him take the mound, but at least he was likely going to go deeper into the game and help rest the bullpen for the day.

In the second half, his ERA has ballooned to 8.57, with the veteran only striking out sixteen batters in 34.2 innings with thirteen walks. As an extreme ground ball pitcher, Richard’s ground ball rate has lowered from 57.9% during the first half, to 53.5% after the all-star break. We’ve been over what has gone wrong for him before, but that was over a month ago. It’s important to see if there have been any new developments in his struggles or not.

First let’s look at where he’s been placing his pitches in relation to the strike zone, so we can see if his issues have largely been tied to his ability to command his repertoire or not.

Here they are side-by-side.

His first half Statcast heat map on the left, and identical chart for the second half on the right: 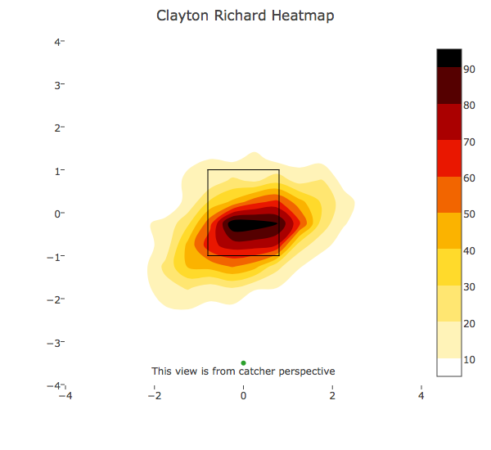 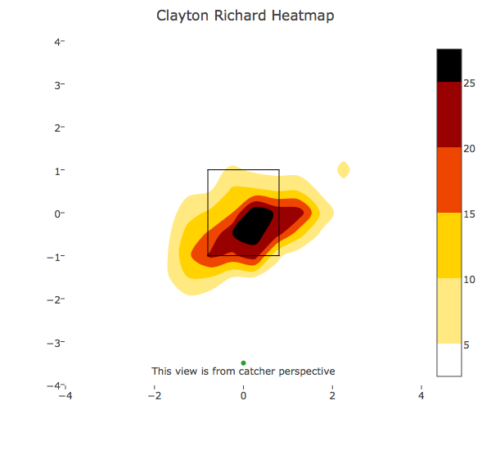 As we can see, Richard has started throwing pitches towards the middle part of the plate a lot more often during the second half of the season. He’s also strangely started to throw pitches towards that upper-right location we see there in the data for the second half, which is not encouraging. His heat map on the right is basically right down the pike, in the heart of home plate. Clearly, Richard is having problems with command more than anything else, but that doesn’t tell us the whole story.

We now need to see if the hitters facing Richard are finding more success in terms of squaring up the pitches he’s throwing to them. As we could likely guess based on the changes in pitch locations for Richard, he’s been hit pretty hard in comparison to the batted balls he allowed during the first half. On the left is the Statcast data for the first half, while the right includes the same information for the second: 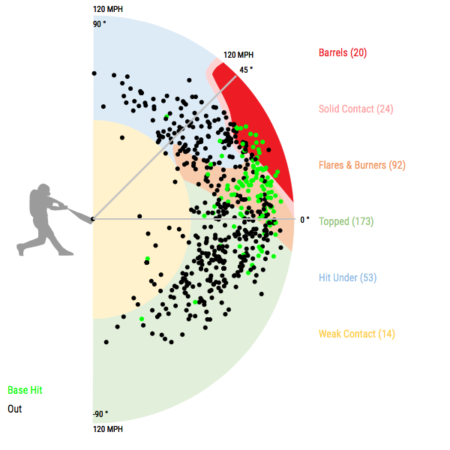 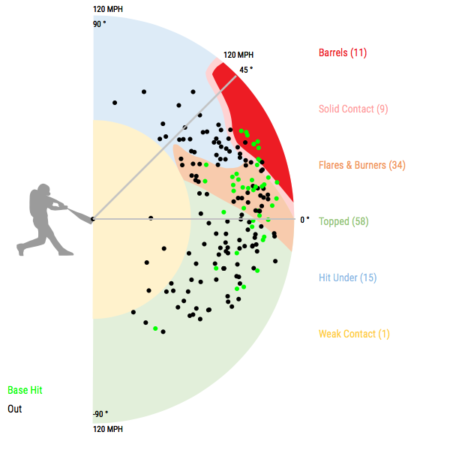 The barrels Richard has allowed are quite obvious, and it looks like he’s almost given up as many barrels in the second half as during the first, in less than half the number of starts! So in addition to throwing more pitches down the middle, Richard’s opponents are hitting those pitches with even more success now. Consider this data on his last start against the Dodgers, as East Village Times Facts says:

During his most recent start (8/24), Padres pitcher Clayton Richard allowed six batted balls with Exit-Velocities over 100 mph, per Statcast. Furthermore, two of those six balls were hit over 105 mph. @EVT_News

That’s not encouraging, and shows that batters are seeing Richard’s pitches very well right now. It’s tough to be successful in the major leagues when giving up hits at such high exit velocities, something Richard has probably learned. We’ve found two points of data to help us fully understand what’s going on with Richard, but there’s still more to explore.

Has his stuff played down due to decreased movement or velocity in his pitches? Using data from Brooks Baseball, we can have a pretty good idea of whether or not this happened to Richard. Let’s compare the data from the first half and the second, to try and answer that question. Here’s the data:

The fact that he’s throwing his sinker more often, yet not getting more ground balls, is indicative of how much his command has been an issue in the second half. Only his slider velocity has increased marginally, and all of his other pitches have definitely lost some zip. So the stuff is down for Richard, too,in addition to him struggling with command of his pitches.

In the coming weeks, the Padres will have a lot to evaluate in terms of Clayton Richard’s performance. He has not pitched well enough to have a very secure spot on the roster at this point, so he’s going to need to improve to make next year’s team. If he keeps pitching the way he has recently, we shouldn’t be surprised to see the Padres cut ties with the veteran. The idea behind signing a guy like Richard was that he’d be a leader and be an example for the younger guys with solid performance. If he can’t provide that kind of stability, it may be time for the Padres to move on.

16 thoughts on “Is it Time to Say Goodbye to Clayton Richard?”