San Diego Padres’ pitching prospect Adrian Morejon displayed excellent command and big swing-and-miss stuff in the shortened 2020 season. Is he ready for the rotation in 2021?

Signed as an international free agent out of Cuba in July 2016, the Padres inked Adrian Morejon to an $11M deal. The southpaw phenom was ranked as the No. 2 player on MLB.com’s Top 30 International Prospects List that year, with Chicago White Sox 2020 Gold Glove winner Luis Robert ranked ahead of him. The 17-year-old jumpstarted his professional baseball career, making seven starts for Tri-City in Low-A ball, posting a 3.57 ERA while fanning 35 batters to go along with just three walks. He finished out the year making six starts for Single-A Fort Wayne, spinning a 4.55 ERA with 23 strikeouts in 27.2 innings.

Morejon continued to progress through the Padres’ farm system until a shoulder impingement prematurely ended his 2019 season. That year, a 20-year-old Morejon made his big league debut in an otherwise lost season for the Padres, making five appearances — including two starts — to the tune of a 10.13 ERA. Again, the shoulder injury played a big factor in why he pitched so poorly, but he was also still so young.

Flash forward to Spring Training in 2020, and Morejon tossed a gem on his 21st birthday. All signs pointed toward him having an increased role before the COVID-19 pandemic ultimately delayed the start of the regular season. He was included as part of the team’s 30-man roster for the season but didn’t make his first appearance until August 18 against the Texas Rangers. Morejon tossed three innings with four strikeouts on an efficient 39 pitches. After the game, Padres manager Jayce Tingler spoke highly about the lefty and his potential.

“All I know is this: He continues to throw the ball like that, there will be roles for him, whether that’s coming out of the ‘pen or another start,” Tingler said. “Because that’s exactly what we needed. That was power stuff, that was swing-and-miss, that was aggressive, that was a good tempo. It was everything we’re looking for.”

Morejon continued to make regular appearances and abbreviated starts on bullpen days, never tossing more than 41 pitches. In all, he made nine appearances — including four starts — while fanning 25 batters, allowing just four walks. 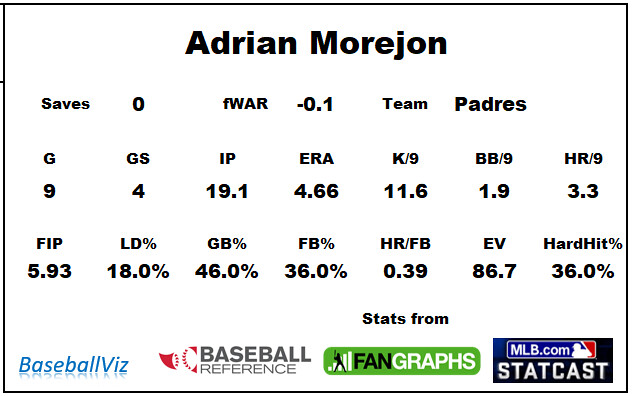 According to StatCast, Morejon’s fastball velocity, fastball spin rate, walk rate, and strikeout rate ranked within the 86th percentile or better across the league. He features four pitches in his arsenal, leaning heavily on his fastball. His primary pitch reaches the high 90s but averaged out at 97 MPH, yielding a .333 average against and .806 slugging percentage last season. Morejon’s secondary pitches were outstanding in the shortened season. His split-finger fastball and curveball were utilized at 17.4 percent and 14 percent while yielding a .167 and .143 average against last year. The former also produced a 57.1 percent whiff rate.

Heading into the 2021 season, Morejon appears to be first in line to grab ahold of a spot in the rotation. With Mike Clevinger out for the entire year, the Padres may look internally at Morejon, Ryan Weathers, or MacKenzie Gore. Otherwise, general manager A.J. Preller will be forced to look outside the organization to solidify the rotation.

Morejon’s biggest improvement needs to come from the production of his fastball. His primary pitch is already well above league average in several metrics, but five of the seven home runs he allowed came off the fastball. For whatever reason, he pitched much better away from Petco Park in the shortened schedule, yielding a 1.04 ERA in 8 2/3 innings with ten strikeouts and just one walk.

Fangraphs’ 2021 ZiPS projections see Morejon posting a 3.83 ERA with 24 appearances — including 17 starts — fanning 67 batters in 56.3 innings. Given the innings identified, Morejon would be pitching in a similar role as the 2020 season. However, those projections were conducted before Mike Clevinger underwent Tommy John surgery, so his innings could be reallocated to Morejon, among others.

Padres’ investment in Tatis goes far beyond the baseball field

Eric Hosmer says Padres ‘on a mission to be a champion’

Padres’ investment in Tatis goes far beyond the baseball field

Eric Hosmer says Padres ‘on a mission to be a champion’