We all know Hunter Renfroe has been on a tear lately, especially after his go-ahead grand slam on Thursday that sunk the Brewers.

However, Andy Green has been penciling in Renfroe as his three-hitter in the lineup very often since the start of July. The power-hitting outfielder has been playing well for over a month now, even before his recent four home runs in the last four games. Take a look at his rolling on-base percentage and Isolated power figures throughout the season, courtesy of Fangraphs: 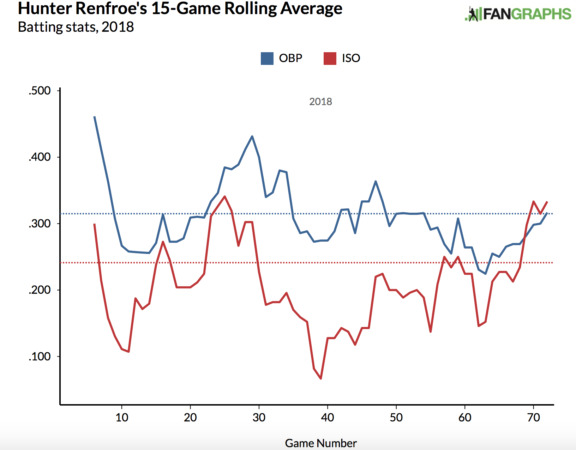 At game 46 is when July began, and Renfroe began catching fire at the plate.

As you can see, he’s hitting as well as he ever has at the major league level over the last forty days of the season. His on-base percentage has been .296 in the same time span, and his Isolated power figure is an absurd .315 in the same period of time. He’s getting on base more often, while actually hitting for more power, which isn’t normally something that is easy to do. A lot of hitters sacrifice points from their on-base percentage in order to get to more power, but this hasn’t been an issue for Renfroe. His wRC+ is 127 since July 1 — the league average is around 100, to give you an idea of how well he’s been hitting as a whole lately.

How has Renfroe improved so much recently?

He has made some key adjustments that have allowed him to do the damage he’s done so much of lately. The knock on Renfroe has always been that he’s too aggressive at the plate, and swings and misses too often. Let’s see if he’s improved his plate discipline this season (Data from Fangraphs):

Well, he certainly hasn’t improved in this regard. Renfroe’s gotten more aggressive on pitches and whiffed more often despite the fact that he’s been thrown fewer strikes. Somehow, though, he’s drastically improved as a hitter, so we must continue to explore his profile to figure out how he’s improved so much.

The Statcast pitch locations of his hits is the next place we’ll examine. First, here’s the pitch heatmap of his hits from March 29th until June 30th: 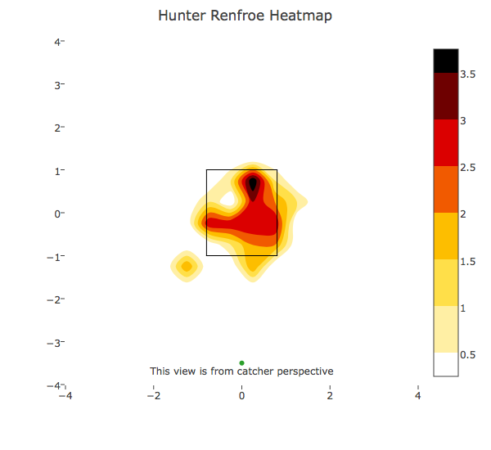 Okay, so we can see he loves any pitches thrown middle-up, anywhere in the middle vertically, and in the low-inside location to some extent as well. Did he swing at pitches in a different location since the start of July? Indeed he did, as you’ll see below: 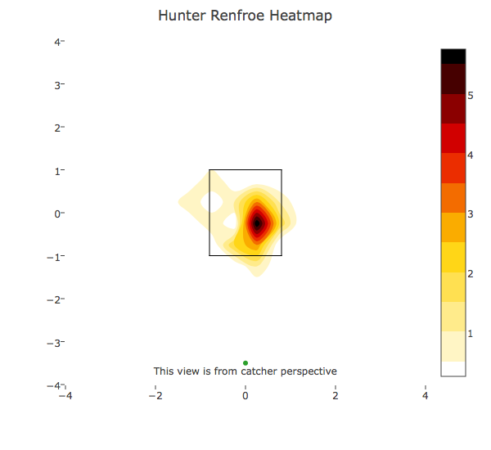 Prior to July, Renfroe’s average exit velocity on base hits was 98.8 mph, and since the start of July, his average exit velocity on base knocks has increased to 101.5 mph. By targeting pitches that are located closer to the heart of the plate, Renfroe is hitting the ball with more force. The hits he’s getting have also been traveling much further than they were previously. On average, his base hits were going 192.6 feet from home plate, and since July first, the distance on his average hit has increased to 243.1 feet. Not only is he hitting the ball with more force, but he’s hitting it further than before. His average exit velocity on batted balls is 90.2 mph, which is well above the league average of 88.5 mph. Clearly, he can hit the ball harder than most hitters.

As a player who was drafted by a previous regime in the 2013 MLB Draft, it’s clear that A.J. Preller and his staff think enough of Renfroe to have kept him around this long. His exceptional power has made him intriguing enough to have earned many opportunities at the big league level, and right now it looks like he’s making the most of it more than he ever has before. His increase in power has been substantial, and very impressive since the month of July began. The biggest question for him moving forward is whether he’ll get enough at-bats to find the consistency in performance necessary to continue starting for the Padres.

We’ve learned that Renfroe has had a tough time finding regular playing time in a crowded outfield this season, and that’s an issue that will only be exacerbated next season by the potential presences of Wil Myers, Manuel Margot, Travis Jankowski, Franmil Reyes, and others. With increased playing time this season, Renfroe has really improved thus far, and looks to be a potentially impactful hitter for the Padres. For some reason he decided to swing more at pitches once July hit, and has managed to get better at hitting for power while doing so. It’s been an especially impressive month or so for the Mississippi State Product. The only question now is whether he can sustain this level of power hitting through the end of the season.

A sophomore at Willamette University in Oregon, Conrad is majoring in Spanish but is also a writing center assistant for other students at Willamette. He has been a Padres die-hard his whole life and hopes to bring comprehensible statistical analysis to the site.
Tags: Hunter Renfroe, Hunter Renfroe Padres, Padres 2018, Padres Hunter Renfroe, San Diego Padres

The Padres have talked trash and misused Renfroe most of this season. It would be better to give the guy consistent playing time, but that idea was ruined when Myers was moved to the OF. Hunter is showing how much talent he really has, and is the player that most GMs ask about in trade talks. I prefer that he stay a Padre.