A hard-throwing righty selected by the San Diego Padres out of Auburn University in the 17th round of the 2015 draft, Trey Wingenter made his big league debut in 2018. He likely showed enough potential to have a decent shot at making the Friars’ 2019 bullpen.

Yet another young arm that got his feet wet at the major league level in 2018 was Trey Wingenter.

At 6-foot-7, he throws a hard fastball at 97.5 mph (average per Statcast), paired with a slider. He only threw two pitches last season, which places more pressure on him to use them well, and he did so with effectiveness in 2018. His height makes it increasingly difficult for hitters to catch up with his fastball, which in turn helps aid the usefulness of his slider.

Although it may seem like a tall pitcher such as Wingenter would have issues keeping baserunners at bay, Wingenter only allowed four stolen bases despite allowing thirteen base hits and walking eleven hitters. This is likely because he threw his fastball 68.8% of the time, giving his catchers more time to throw runners out. He also had an impressive left on base percentage of 81.7, which further illustrated his ability to hold opposing teams in check on the basepaths.

Considering the velocity with which Wingenter throws, it makes sense that Wingenter struck out a significant number of his opponents in 2018. His K/9 ratio was 12.79, as he struck out 27 of the 81 batters he faced. More encouraging was the fact that he struck out 14.46 batters per nine innings during the month of September. When Wingenter was at his best, he located his fastball on the outside part of the plate well — as this clip shows:

If Wingenter could be more consistent with his command, the Padres would have a very useful reliever on their hands. On that note, let’s discuss the areas where he should improve.

Walking Far Too Many Hitters

Across nineteen big league innings in 2018, Wingenter walked eleven hitters — which was less than ideal for his performance. This made for a walk ratio of 5.21 per nine innings, and that’s clearly not a recipe for success in the major leagues. It is a small sample of innings pitched that we’re working with, but the fact that the tall right-hander walked 4.87 batters per nine in 44.1 frames at Triple-A suggests that it’s been a common theme during his career. This is among the chief concerns we’ve had about Wingenter’s future, and he’ll need to limit walks more often in order to have an increasingly significant role in the Padres’ bullpen moving forward.

Relating to his struggles with throwing pitches in the strike zone, he also left many of his pitches in the strike zone over the heart of the plate. This led to him allowing opponents to barrel 14% of their batted balls against him, which is two times more often than the league average of 7%. Also important to consider is that his opponents hit balls at an average exit velocity of 91.7 mph, which is well above the major league average exit velocity. Here’s where he threw all of his big league pitches in 2018: 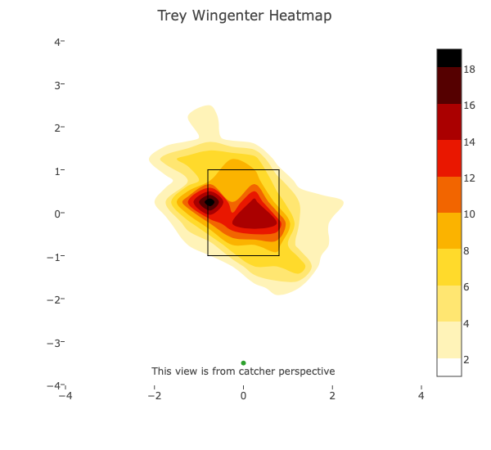 As we can clearly see, he threw a large number of his pitches last season down the middle of the plate. This was clearly an issue, as the aforementioned barrel percentage and average exit velocity data from Statcast indicate. What’s also significant in evaluating the chart above, is that Wingenter’s pitches were thrown in a multitude of locations in and out of the strike zone. Sometimes it makes sense to throw the breaking ball in the dirt, for example, but Wingenter would have done well to more consistently locate his pitches.

When discussing Trey Wingenter, it’s key that we remember this is a guy who has only thrown nineteen innings in the major leagues thus far. The sample isn’t large enough for us to seriously consider any of the conclusions we came to above, right? That’s probably the most logical approach to evaluating Wingenter at this point in time.

What we did gather regarding his performance in the big leagues, though, told us a lot about who he may be as a pitcher moving forward. This is a guy who throws with premium velocity and has a decent secondary pitch to go with it. In today’s day and age of increased bullpen usage, having a pitcher like Wingenter has, in many senses, never been more valuable. Given more time to develop his pitching at the big league level, this right-hander has the potential to pitch in the late innings for the Padres in the seasons to come. If he can continue to hone his command, in particular, Wingenter will very likely pitch in more high-leverage situations in the seasons to come.

Padres Down on the Farm: July 27 (Campusano 3 hits/Ornelas game-winning HR for FW/Merrill another hit in ACL)