Leading the Padres in WAR is power hitting outfielder Hunter Renfroe, who at age 27 has blossomed into a key part of the team’s lineup. While his improvements with the bat have been obvious recently, he’s also made significant strides on defense. Here’s an analysis of his improvements in multiple facets of his game.

At the start of the 2019 season, it looked as if Hunter Renfroe had lost a good amount of his playing time to Franmil Reyes.

Considering how well Reyes had produced at the end of 2018, this made sense — The Dominican outfielder had produced 1.2 WAR in 87 games compared to Renfroe’s 1.6 in 117 contests. Now obviously both players have proven themselves to be highly valuable to the Padres, but Renfroe, in particular, has played exceptionally well for San Diego. He’s producing on offense as a useful middle of the order hitter and playing solid defense for the first time in his career.

On the surface level, his offensive production is what stands out above all else. As a whole, his profile is still largely reliant on his impressive hitting abilities. That’s probably always going to be true in his case, so it’s important to understand how the slugging outfielder has improved with the bat this season.

Here are the primary statistics illustrating his hitting development:

Whereas last season Renfroe was a good power hitter who was an above-average contributor on offense, this season he’s developed into a legitimate threat at the plate. The most significant part of that development has been Renfroe hitting for power at an astounding rate. He’s increased his isolated power figure by more than 100 points, which by the way ranks as the second-highest among all major league hitters. Only Christian Yelich has a higher isolated power figure than Renfroe, which tells us a lot about the 27-year-old’s power.

That’s not the only way in which Renfroe has stepped up his game in 2019. On the base paths, the veteran hasn’t embarrassed himself, improving his baserunning value from -1.1 in 2018 to 0.4 this season according to FanGraphs. He’s added three stolen bases already this year, which ties his career high. His progress in running the bases presents us with further evidence of his all-around improvement in 2019.

Furthermore, Renfroe has also vastly improved upon his defensive performance this year. Here’s a look at some of his numbers on defense during the last couple seasons:

As we can see above, he’s already been vastly better in 2019 than he was in 2018 on defense. It’s seemed like he was always a player who had average range and a great arm on defense, right? This year he’s put it all together defensively — Using his arm more wisely and also tracking fly balls down with more consistency. What has been behind this dramatic improvement in defensive value from Renfroe?

If we look at the Statcast data on his defensive performance, we see first that he’s been worth +1 outs above average in 2019. Last year that number was -1, which is further evidence of the strides he’s made on defense. The key adjustment made by Renfroe has been a change in his positioning in the outfield. Here’s an image illustrating where he positioned himself in both 2018 and 2019: 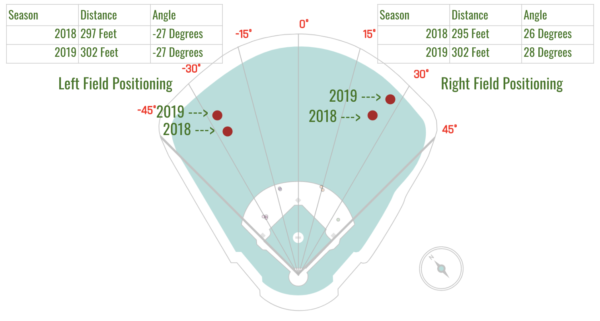 The key adjustment here is that Renfroe is playing deeper in both right and left field, which has allowed him to mitigate his weaker fielding abilities on balls hit over his head. See, when we look at his directional outs above average during the 2018 season, it’s clear Renfroe’s biggest issue on defense was allowing too many balls to be hit over him: 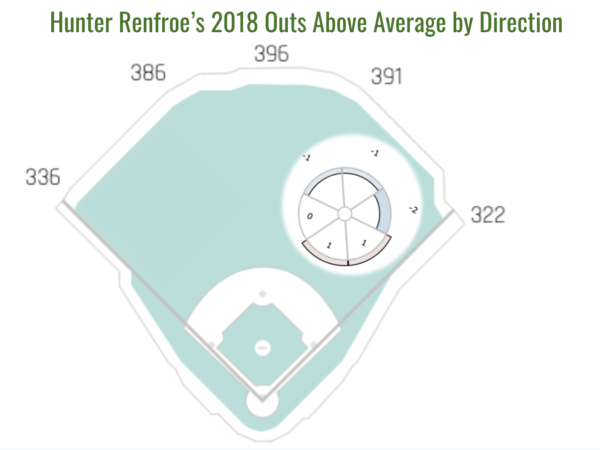 Looking at the illustration above, we can see that Renfroe had the most success in 2018 catching balls hit in front of him, and struggled to get to balls that were hit over his head. So it was a key adjustment for him to position himself deeper in the outfield during this season, which has allowed him to mitigate his issues on balls that he has to go back on. In the case of his positioning in right field, he’s also made it easier on himself to chase down balls hit to his right by moving closer to the foul line.

Based on the data shown above, it’s clear that Renfroe has improved in nearly every facet of his game measurable. The lone blemishes in his profile this season has been a slightly higher strikeout rate, but that isn’t much of a concern considering how well he’s producing offensively overall. There were times before this season when Renfroe flashed the ability to be an impact player but never could sustain his production throughout a full season. At this point in 2019, Hunter Renfroe has become the star the Padres envisioned he would become back when they drafted him in 2013.

All Data in this article is courtesy of FanGraphs and Statcast.

A sophomore at Willamette University in Oregon, Conrad is majoring in Spanish but is also a writing center assistant for other students at Willamette. He has been a Padres die-hard his whole life and hopes to bring comprehensible statistical analysis to the site.
Tags: Padres 2019, Padres Hunter Renfroe, Padres Renfroe, San Diego Padres, San Diego Padres Hunter Renfroe

So, Renfroe is a very valuable for the Padres as well as Yates. Business as usual with the Padres, they are both on the hot seat to be traded. We should be looking for ways to unload the dead wood like Myers, Kinsler, Hedges, Stammen. Myers alone would be addition by subtraction. Just a thought from a thoroughly frustrated Padre fan. I’ve been watching the Padres since they were at Westgate Park and I would love to see a World Series title before my sand runs out.

Matt your correct with trading Myers, Kinsler and stamen.Unfortunately there is no other team that will give you more than a pack of big league chew for all three of them. With that said, they need to Dfa Kinsler and stammen and just hope Myers figures it out ( highly unlikely)

Dead wood? Kinsler has hit well since a bad April, and in any case was only brought in to fill the time until Urias. Stammen is a good pitcher, who has been overworked and whose numbers stink in some part due to the manager leaving him in to give up 4 runs in one inning on two separate occasions. He’s 35 and signed only for 2019. Hedges is actually 4th among position players in WAR on this team. And Myers, well he’s not going to ride the bench with that contract. They’ll hope he goes on one of his hot… Read more »