The San Diego Padres will face off against the New York Mets this weekend at Citi Field in a best-of-three for the Wild Card series. The winner will face the Los Angeles Dodgers in a best-of-five series in the National League Division Series.

Both teams have yet to announce starters for each game, but the Game 1 starting pitchers have been set, with Yu Darvish for San Diego and Jacob Degrom for New York. Blake Snell has been announced as the Game 2 starter for the Padres, with Joe Musgrove pitching in a possible Game 3. New York will use a combination of Jacob Degrom and Chris Bassitt for Games 2 and 3 (if necessary).

With the starting pitchers for the Mets known for the series, here is a look at each one’s performances from the season.

Going against two of the best pitchers of the generation, as well as a very solid No. 3 pitcher in Bassitt, will be a tough task for the Padres lineup. A few players in the lineup have some extended history with the expected Mets starters for the series.

Scherzer has had a lot of success against this Padres lineup, struggling mightily against the switching-hitting Josh Bell but otherwise carving through the Padres. Wil Myers has had a little bit of success facing Scherzer in his career with two home runs and seven hits but has struck out 14 times in 25 at-bats.

The middle of the order has struggled against the Mets’ ace, with Jake Cronenworth going hitless in 13 at-bats and Brandon Drury with one hit in 11 at-bats. Manny Machado easily has the most at-bats against Scherzer with 50, but with a .496 OPS, the Padres will hope he can turn that around in Game 1. Jorge Alfaro and Trent Grisham have 23 and 15 at-bats against Scherzer, respectively, but both are hitting below .200 against the ace.

Scherzer faced the Padres this season back on July 22 in a 4-1 win for San Diego. Scherzer went six innings, allowing two runs and five hits while striking out eight and walking one. The only two runs he allowed were on an Eric Hosmer two-run home run in the fourth inning.

In three of Scherzer’s last seven starts to end the season, he allowed four runs. Each of those three starts were on the road against playoff teams, with two against the Atlanta Braves and one against the New York Yankees. Scherzer’s ERA at home this season was 1.67 compared to a 2.79 ERA on the road, so he looks a lot more comfortable when pitching at Citi Field.

The Padres will have to get a few runs on the board against Scherzer if they want to win Game 1. Having Yu Darvish on the mound will be great, but getting out to an early lead, with help from Darvish on the other end, may prove to be the deciding factor in who wins Game 1.

Jacob Degrom has been dominant against the Padres lineup in their careers. Many of the players have only faced Degrom a handful of times, but four of them have double-digit at-bats against the ace. Juan Soto and Alfaro have 15 and 18 at-bats against Degrom, respectively, and although both have struggled against him, each of them have hit a home run, with Soto talking three times.

Myers has 24 at-bats against Degrom and has two doubles and a home run, but he has also struck out 11 times. Machado has been the most successful of this lineup against Degrom, with six hits (all singles) in 20 at-bats.

Degrom did not look like his usual self over the last few weeks of the season, allowing three runs in three of his previous four starts and five in the other one. If the Padres can get this version of Degrom in Game 2 or 3, the series could very likely be theirs to take. 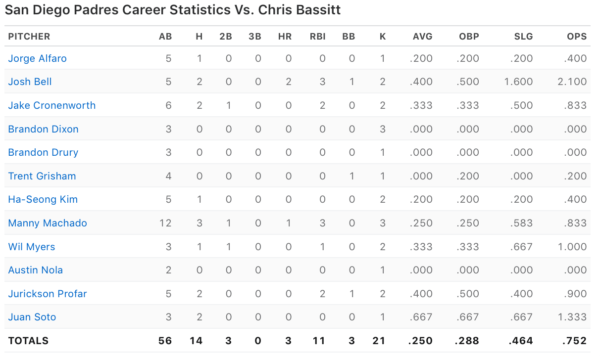 It is very likely that the Padres face Bassitt in this series unless they win in two games. Bassitt has been a huge part of this rotation all season and has been a big reason why they won 101 games. From the end of July to the beginning of September, the Mets won eight straight games started by Bassitt.

He did start two games against the Padres this season, though, and each was a completely different outcome. On June 8, the Padres crushed Bassitt for seven runs and eight hits over 3.1 innings. On July 23, Bassitt looked much better, allowing two runs and four hits while striking out 11 and walking none in seven innings.

With the Wild Card series versus the Mets starting Friday, the Padres have had a few days to scout each pitcher they will be facing, and barring a surprise, Scherzer, Degrom, and Bassitt will be the three starters San Diego will be facing in this series (Game 3 if necessary).

Bobby is currently a Junior at Arizona State University and is majoring in Sports Journalism in the Walter Cronkite School of Journalism and Mass Communication. He is from San Diego, loves to write, and has a deep passion for baseball, football, and basketball. He also co-hosts the "Devils Talking Padres" podcast and is a contributor for ZonaHoops.com.
Tags: Padres 2022 Playoffs, Padres vs Mets, San Diego Padres

Rotation still needs to be high priority for Padres

1 thought on “How have Padres fared against the Mets’ starting pitching?”