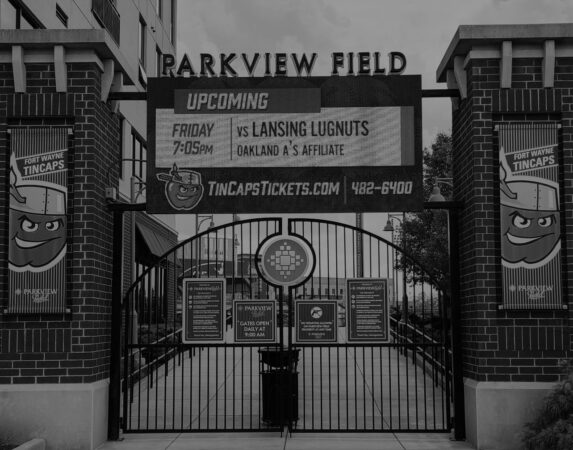 The High-A Central season is in full swing.

Earlier this year, we gave you early-season power rankings, which you can read here.  Since then, a lot has happened. The East Division has been competitive while the West has been more one-sided. Here is an indication of each team’s stock that has risen, fallen, or stayed the same.

#1.) Quad City River Bandits– (KCR)- (Previously third) ↑ Currently in first place in the West.  They did not get the top spot in May because of their early strength of schedule. They played 12 games with South Bend and Peoria early on.  The 22nd ranked prospect in the MLB, Ash Lacy got his professional pitching career off to a rough start but has since turned that around.  Most recently going six innings striking out nine.

#3)- Cedar Rapids Kernels-(MIN)– (Previously eighth) ↑ The bats were hot early on in the season as they were the top hitting teams in the league. Promotions to Double-A were awarded, and then hitting has since averaged out.  The Kernels also rank first or second in many pitching statistics. Opponents are only hitting .216 off the Kernels.

#4.)  Great Lake Loons– (LAD)- (Previously twelfth) ↑  Was my early season rank a big swing and miss for the Loons?  I think it is still yet to be determined.  They opened the season playing against Eastern leading Dayton. Then they played the West Michigan Whitecaps, who at the time had Detroit Tigers top prospect Spencer Torkelson.  Their pitching and fielding have improved from below average to average per league statistics.  The big change is the offense.  Justin Yurchak, Miguel Vargas, and Ryan Ward are all batting over .300.

5th)-  Lake County Captains- (CLE) (Previously first) ↓ Pitching continues to get the ground balls when they need them. The Captains have turned the most double plays in the league.  Logan Allen is 5-0 with a 1.58 ERA in 51.1 innings pitched. The Captains also have 88th ranked MLB prospect outfielder George Valera on their roster.  He was injured early but has since collected 21 hits in 25 games played.

6th)- Wisconsin Timber Rattlers– (MIL)- (Previously seventh) ↑ They play in the same division as Quad Cities, who is ranked #1. Shortstop David Hamilton has stolen 31 bases in 49 games played.  Second basemen Hayden Cantrelle leads the league in walk to strikeout ratio.  Garrett Mitchel was recently promoted to Double-A.  He is the MLB’s 49th ranked prospect.  His bat will be missed as he was batting .359.

7th)- West Michigan Whitecaps- (DET) (Previously fifth) ↓ The Whitecaps lost MLB  #3 ranked prospect Spencer Torkelson to Double-A.  They also have the worse fielding percentage in the league. However, they are in the upper third of the league in most pitching ranks. Because of that, they only slid down two spots.

8th)- Lansing Lugnuts- (OAK)- (Previously sixth) ↓   They did have some of the best pitching numbers in the league until injuries hit their staff. Currently, they have seven pitchers on the IL.  This has also been a tough 30 game stretch on their schedule with series vs. Cedar Rapids, Dayton (twice), and Great Lakes (twice)

9th)-Beloit Snappers- (MIA) (Previously fourth) ↓ The Snappers have played the South Bend Cubs and Peoria Chiefs a total of 24 times which are both below them in the West standings.  On August 3, they open their new Stadium against the Wisconsin Timber Rattlers. second-round draft pick Griffin Conine lead the team in most statistical categories.

10th- Fort Wayne Tincaps- (SDP)- (Previously tenth) One step forward and two steps back describes the TinCaps season thus far. The TinCaps took four games from the South Bend Cubs that moved them up in the standings.  They proceeded to lose five of six to the Los Angeles Dodgers High-A affiliate Great Lake Loons.  Jonny Homza has paced the offense, batting .272 with 42 runs scored.

11th- South Bend Cubs-(CHIC) (Previously eleventh) like the TinCaps, the Cubs have had a hard time stringing together wins. MLB 45th ranked prospect Brennen Davis has been promoted to Double-A Tennessee Smokies.  Delvin Zinn is tied for first in the High-A Central in stolen bases.

12th- Peoria Chiefs- (STL)- (Previously ninth) The Chiefs are in last place in the West.  15 games out of 1st place and 4.5 behind fifth-place South Bend.  They have a series’ with Wisconsin and Quad Cities coming up next is not promising for improving their record.

I was born, raised, and still reside in the Hoosier state. I am a 2008 graduate of Ivy Tech Community College. I am married to my beautiful wife Kristen, father to Garrett, with another child on the way. A baseball enthusiast covering the Fort Wayne TinCaps, High A affiliate of the San Diego Padres.
Tags: High-A Central, MiLB, MLB, TinCaps