The resurrection of SDSU football is well known. Following a disastrous seven years under Tom Craft and Chuck Long, the Aztecs hired Brady Hoke as the 17th head coach in program history. Hoke brought a contrasting physical style to his pass-happy predecessors. One of his first orders of business was to bring the rushing attack back to the Mesa.

Hoke inherited an offense that managed only 878 yards rushing in 2008. Two seasons later, the Aztecs ran for 2,097 yards. 2010 was the first time the program had reached the 2,000 yard mark since 1998. Following the season, Hoke left SDSU for Michigan, and Rocky Long took over as the head man.

Long, even more disposed to pounding the ball than Hoke took SDSU to new heights. Behind a physical, ball-control offense and terrific defense, the Aztecs won back-to-back conference titles in 2015 and 2016. Year after year, SDSU produced professional-level running backs leading some to dub SDSU “Running Back U.”

The 2018 off-season brought a complete reevaluation of the program. From the recruiting process to the strength and conditioning program to the style of play on the field, nothing was off-limits for the self-reflection. The most visible change that emerged from the audit occurred on the offensive side of the ball. SDSU switched from the pro-style “I” formation base to the spread offense.

At the time, there were four stated reasons for making the switch.

An evaluation of SDSU’s offense the past two seasons should take place within this context. Any conversation outside these stated goals would encompass more than what SDSU’s offensive coordinator Jeff Hecklinski has charge over.

“Believe me, I feel all the frustrations that are out there too,” Hecklinski said as part of Episode 12 of The SDSU Football Podcast. “I have been here for 22 games. I think that Frisco Bowl was a culmination of 21 games, all that development coming together in one moment, and it really started to come out and show itself.”

Make it easier to recognize how opposing defenses lined up 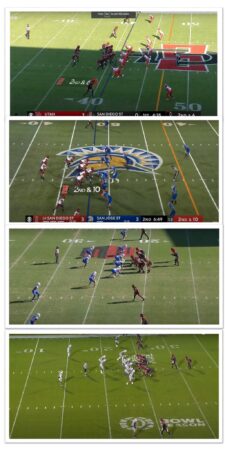 Of all of the expressed aims, this is the easiest to verify as an unquestioned success. The photo series to the left is taken from four games, Utah, San Jose State, Boise State, and UTSA. In each snapshot, SDSU is lined up in their base formation with three wide receivers, a tight end, and a running back. Notice how similar the defenses line up against the Aztecs.

Each defense had seven in the box with a single high safety, and defensive backs lined up with SDSU’s wideouts. On paper, this gives the Aztecs a few advantages. It puts opposing cornerbacks on islands, creates a huge mismatch for SDSU tight ends, makes the unblocked player on the line more obvious in the read-option game, and if blocked well, puts tremendous pressure on the lone free defender to bring down the running back or players involved in the screen game. More importantly, it allows for easier game planning and blocking assignments.

Teams are unable to blitz as much compared to when the SDSU base was the I-formation. If opposing defensive coordinators decide to bring pressure and the Aztecs call a running play away from where the extra rusher is coming, it is a recipe for a big gain. Throughout the season, the opposition keyed on stopping the run, content to bottle up Greg Bell and make it easier for the free defender to tackle Bell because he has less space to work with.

This metric is subtly different than the one that follows and is closely related to the previous measure.  The point of this examination is not so much the effectiveness of the offense but the opportunities the spread presents in the passing game. Here again, the switch has provided obvious benefits.

Too often, open receivers were not identified, or the quarterbacks had trouble delivering the ball. Unlike in years past, the issue was not primarily the opposing pass rush or the play developing too slowly. Heading into the season, many wondered which position group, the WRs or QBs, were most responsible for the deficiencies in the passing game. 2021 left no doubt because, unlike 2019 and 2020, the opportunities were there. The QBs could not make the plays, especially early in the season.

“If you think about it, San Jose State, we really struggled throwing the football,” Hecklinski said. “I looked back at myself and said, ‘Ok, I have to restructure myself because obviously, something’s not working.’ I have not been able to translate to the quarterbacks and get us in a position, so we become accurate to make the throws that needed to be made, in order to not have games like that.”

Help the QBs feel more comfortable with their assignments

By his own admission, the blame for the QBs poor play falls on the shoulders of Jeff Hecklinski. Jordon Brookshire and Lucas Johnson were able to read defenses, they could handle the speed of the game to locate the proper target, and they could manage the team to put SDSU in the position to be successful. What they struggled to do was make the required passes, and that is where coaching steps in. 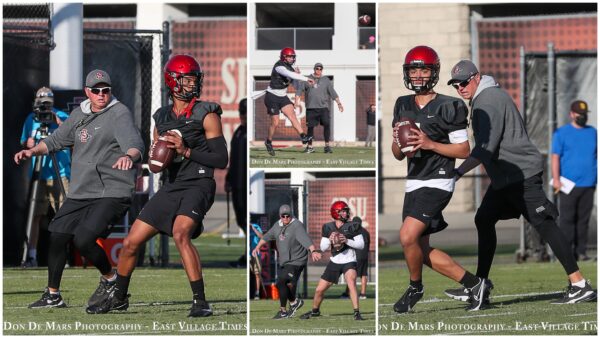 For many, Covid-19 has been a reset on values and priorities. The past two years, where nothing has been normal, have made Hecklinski a better coach. It forced him to communicate in different ways, helped him to rely more on his position coaches, and defined his priorities as a coach. Following the San Jose State game, Hecklinski changed his approach. He became a position coach first and an offensive coordinator second.

“My role changed. I became a better coach,” Hecklinski explained. “I’m constantly learning and trying to learn. … I don’t have all the answers. When I come up against something that really I struggle with, I’m going to go search and find those answers to be able to help get us where we need to be. I thought after San Jose State, I needed to restructure myself. …”

“My restructuring of myself, my thought process through this, what we came with was (my title) should say quarterbacks coach/offensive coordinator. It’s not offensive coordinator/quarterbacks coach. I coach, arguably, the most important position on the field. In order to do this, my emphasis and my time needs to be dedicated to those men, getting those men fundamentally and mechanically sound. If you look back at that San Jose State game. We weren’t throwing to the wrong guys. We weren’t able to make the throws. That’s mechanics and fundamentals. That’s the work I’m doing during practice (now).”

The aim of SDSU’s offense is balance. Last season the Aztecs ranked 110th in total offense at 342 yards a game. Improving that to 400 yards, a contest would have had them at 68th in 2021. Reaching the 400 yards mark would be a terrific improvement for the offense. Ideally, if they averaged 400 total yards a game, 150-200 yards would come on the ground, and 200-250 would come through the air.

As the graphic to the right indicates, only eight players have passed for more than 350 yards for a Brady Hoke-led team. Hoke began coaching in 2002 and is the only coach in NCAA history to lead three different universities to eleven win seasons. He has a clear track record of success playing a particular style. To expect SDSU to pass for 300 yards a game ignores the balance Hoke desires. Lucas Johnson’s 333 yards during the Frisco Bowl was the 12th highest passing total Hoke has seen in his two decades as a head coach.

While the offense is far from established, there are signs the team is moving towards being the balanced attack Hoke desires. The Aztecs’ passing attack was 43-79 (54%) for an average of 118 passing yards a game during the first four contests of the 2021 season. In the middle five games, that number improved to 75-127 (59%) and 144 yards a game. Over the final five, the numbers approached the target for an ideal SDSU offense finishing 70-134 (62%) and 232 yards per game.

Hecklinski says the best line of demarcation in the season should be the San Jose State game, where he looked himself in the mirror, took responsibility for the floundering passing game, and grew as a coach. The numbers bear out his assertion. When Hecklinski devoted the majority of his time to leading as a quarterback coach, the QBs greatly improved. In the first six games of the season, the Aztecs were 70-134 (52%) for 129 yards per contest. Over the final eight, SDSU threw for 197 yards a game while completing 147-232 (63%) of their passes.

These statistics bear the hope Aztec Nation has for an improved passing game in 2022. SDSU’s air attack is far from a finished product, but it has clearly improved under Hecklinski. The Aztecs are not as far away from their intended balance as some might suggest.

While Bell was certainly an impactful player, he was not in the same category as Rashad Penny and Donnel Pumphrey. That reality makes the 2021 statistics more valid, but a deeper look inside the numbers reveals the move to spread has helped the offense to remain at a high level even when they are not elite running the football.

During the first four games, SDSU averaged 373 yards of total offense. They did most of their damage on the ground, racking up 255 yards per game and only 118 in the air. In many ways, the offense resembled the 2015-2017 teams during the non-conference portion of the schedule. When the conference season started, opposing teams were successful in stopping the Aztecs’ ground game. SDSU averaged only 143 yards per contest on the ground in conference play.

In years past, that loss in production would have meant the offense would have stalled. In 2021, the passing game emerged enough to keep the ball moving. Over the final five games of the season, they averaged the same 373 yards they had during the first four games, but it was the passing game that led the way with 232 yards a contest, with the running game chipping in 151.

“We had 11 out of 18 (offensive) categories where we were in the top 50 nationally,” Hecklinski said. “Our bottom four is where we have to improve. We had 4 out of 18 in the bottom 25 in third-down conversion, passing offense, passing yards per completion, and total offense. Those are the four areas. We got to get into the top 50. That has to be the emphasis moving forward. … we have to take our bottom four and bring it into the top half of the country. Do that, and now you’re talking about where we expect to be offensively. … we want to have an offense that matches our defense. That’s where we’re headed to.”

My earliest sport's memory involve tailgating at the Murph, running down the circular exit ramps, and seeing the Padres, Chargers and Aztecs play. As a second generation Aztec, I am passionate about all things SDSU. Other interests include raising my four children, being a great husband and teaching high school.
Tags: Aztecs Offense, SDSU Aztecs, SDSU Brady Hoke, SDSU Football