Brandon Maurer‘s season, at least to this point, has not gone the way he or the Padres have hoped.

As a popular trade candidate, Maurer has not done much to improve his value. Once deemed as one of the favorites to be shipped off to a contender at the trade deadline, it now seems perhaps a bit more likely that he hangs around in San Diego.

So what’s up with Maurer?

Following a dominant debut season with the Padres in which he posted a 3.00 ERA in 51 innings pitched, his last season and a half has been really underwhelming.

He is also allowing hard contact at a lesser rate than in 2016 (32.3% compared to 39.1%), and his ground ball rate is up as well. The Padres have been one of the worst teams in baseball at getting outs on ground balls, too.

Which teams are turning ground balls and bunts into outs at the highest rate?

At the same time, it just seems like his dominance isn’t there. I mean sure, he has a dominant outing every now and then, but that consistency is lacking. Instead of improving as he heads into the prime of his career (Maurer is currently 26), it seems like he, at least statistically speaking, is going the other way.

The reason for this? It might be due to him abandoning the pitch that made him so good in 2015.

You see, Brandon Maurer’s “hard slider” is gone. It left after the 2015 season and has not made a return since. Take a look at Maurer’s pitching chart, per baseballsavant: 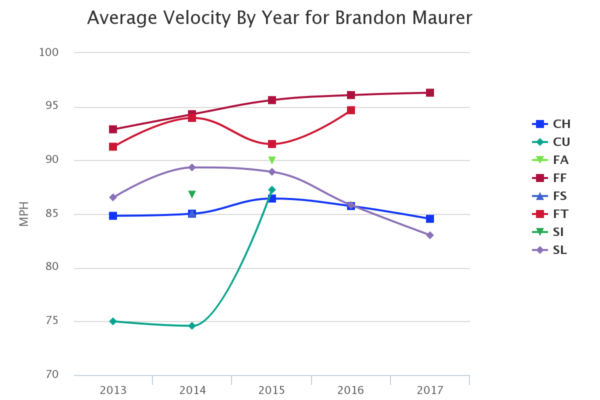 The velocity on this slider has taken a sharp dive ever since the end of the 2015 season.

Remember that “turn Brandon Maurer into a starter” experiment that occurred in 2016 during Spring Training? That experiment completely took away a really successful pitch that Maurer had used in 2015. In 2015, hitters hit only .172 off Maurer’s slider (which averaged 88.93 MPH). I couldn’t find video of the pitch in 2015, but here is one late in 2014. At 90.1 MPH, I present you with a Maurer power-slider:

Entering spring training in 2016, the Padres and Maurer (who was expecting to be a starter) decided that they were going to work on developing a new pitch: a curveball. After the starting experiment was scratched, Maurer scrapped the curveball. But the residual effects of working on that pitch carried over to Maurer’s “power slider.” Maurer even admitted as much:

“I was working on the curveball so much in Spring Training,” Maurer said. “I don’t really want it to be doing that, but I think I’ve got different rotation on the [slider] now. It breaks more down instead of a sweep. It’s a slider, it’s just not the power slider I was throwing last year.”

In 2016, the pitch ended up losing about four MPH (averaging 85.83 MPH). He claimed to have re-discovered it during one stretch in 2016, but it still was not the same pitch. Still, hitters only hit .224 off of it and it generated a lot of swings and misses. Not all was great about the difference in his slider, though. Halfway through the season, FiveThirtyEight.com noticed Maurer had one of the largest declines in the big leagues in terms of slider efficiency: 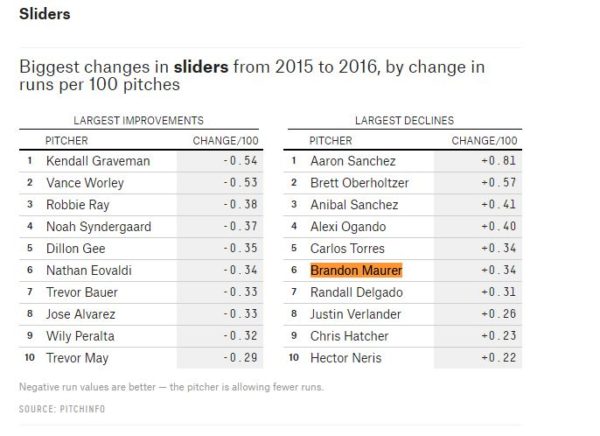 Andy Green chronicled early in 2016 how Maurer was having a tough time finding the pitch again.

“He’s having a hard time getting back to the hard [slider],” manager Andy Green said. “I think either one can be equally as effective, it just depends on the individual.”

Green was somewhat correct; but Maurer had lost his go-to pitch, one that had made him so good. He threw it a ton, too… even more than his fastball. He threw 334 sliders compared to 286 fastballs in 2015. In 2016, clearly realizing that his slider was not the same pitch, Maurer ended up throwing 621 fastballs compared to 388 sliders in 69.2 innings.

Fast forward to 2017, and the slider has gotten even slower. Not only that, but the slider just has not been effective at all. Opposing hitters are hitting a robust .357 off Maurer’s slider, and the velocity has dropped all the way down to an average of 83.02 MPH. It’s a totally different pitch, and absolutely not as effective. See here as Scooter Gennett grounds out sharply to first on Maurer’s “new” slider:

I don’t know if this has a whole lot to do with some of Maurer’s struggles this season, but I do believe that it might have something to do with them. This year, he has thrown more than twice as many fastballs (277) than sliders (129). There is almost a 13 MPH difference between Maurer’s fastball and his next pitch. I hope he hasn’t scrapped the whole power-slider thing completely, and it would not surprise me to see him maybe look to go back to it in the future (if he can find out how to throw the pitch again).

Brandon Maurer still has the stuff to become a dominant relief pitcher, and the Padres would be mistaken to sell low on him at the deadline. His peripherals show that he has been better than some stats indicate, and we should start to see that as the season continues along.

An in-depth look at the newest Padres acquisition, Jorge Mateo

Baseball is fun. College sophomore that is aspiring to work someday in the sports industry. Follow me on twitter @Friar_Faithful. Go Pads!