Luis Perdomo came into this game looking to secure his second win of the season and to improve his overall record.

This series has been no joke. 17 total home runs, a total of 26 runs scored in three games, two of which reached extra innings. Some claimed the ball was juiced, but I think we all just got to witness a rare stretch of pure offensive power.

Luis Perdomo caught the short end of the Padres’ offensive stick on Father’s Day Morning. During the first two games, the Padres were responsible for nine of the 15 home runs that were knocked out of Miller Park leading up to Dia de Los Padres. But on that Sunday afternoon, the bats must have overslept after Saturday night’s mashing of baseballs.

The Brewers Jimmy Nelson pitched the first complete game of his career in front of his father on Sunday. During the course of the game, Nelson gave up just six hits and a single Padre run while nearly caving his chest in from beating against every chance he could find.

The one Padre run came off the bat of Erick Aybar, who ripped the ball into center field and brought Cory Spangenberg around the bases to score. That run put the Padres up 1-0 early, but would end up being the only run of the game for the Friars.

On the opposite side of the field, Luis Perdomo was dealing and dodging his way out of multiple jams, keeping the Brewers run total to just two. He ended the night after pitching 6.0 innings allowing nine hits, two solo home runs, and two walks. He did manage to strike out four batters and induce three double plays.

The two solo home runs Perdomo gave up were back-to-back in the bottom of the sixth inning. Both pitches were mistakes that hung over the middle of the plate and taken advantage of by the Brewers.

Luis Perdomo was able to flip the script with the struggles he’s been having this season. If you were unaware, left-handed batters have been crushing the ball against Luis Perdomo. Lefties have been the ones who have been able to get under Perdomo’s low pitches and turn them into hits, rather than ground outs. 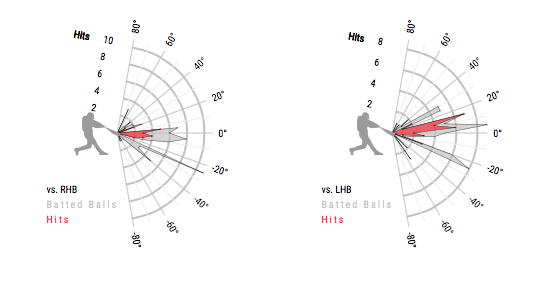 Above, you can very clearly see the difference in the launch angles on batted balls between lefties and righties against Perdomo.

Tonight, left-handed hitters worked just three of the nine hits given up by the former Rule 5 pitcher. Two of those three hits came from the same player, Eric Sogard. The other lefty was Travis Shaw, who finished 1-4 on the night.

Luis Perdomo has been very unlucky this season. Sunday made it his fourth game this season where he’s gone at least six innings and given up two or fewer runs, but the third time he had either been credited without a decision or credited with a loss.

Another positive on the day, besides a terrible throwing error by Spangenberg, was the Padres’ defense. Two very unusual double plays happened today, a 1-2-3 double play and a 8-6-1 double play.

Franchy Cordero, in center, made a spectacular running catch to catch Sogard off his gard (guard) and start the 8-6-1 DP. He covered 97 feet in just 5.1 seconds to grab a ball with 44% catch probability and secure the four-star grab.

Allen Cordoba also laid out nicely to rob Eric Thames of a hit in the bottom of the ninth inning.

A very solid outing by the Padres’ defense on Father’s Day fell victim to the failure to score on offense. Luis Perdomo is going to have to continue to be exceptional if wants to even out that skewed 1-4 win-loss record.

Derek is a 22-year-old out of Lemon Grove, California. A burning passion for San Diego sports led him to pursue an opportunity to write and share about what's going on with the teams in America's Finest City. A young and aspiring sports journalist looking to grow his knowledge and expand his experience at any opportunity.
Tags: Luis Perdomo, Padres, Padres Perdomo, Padres vs Brewers, San Diego Padres, San Diego Padres vs Milwaukee Brewers