The San Diego Padres have seemingly recovered from a bad start and have finally gotten back to winning ways, beating the Colorado Rockies 5-2 at Coors Field.

The Padres showed persistence after being down early and came back strong to grab a win.

Let’s look at some key takeaways from the game.

After a shaky debut, Lucchesi has been rock solid and has looked like the pitcher who impressed the Padres’ coaches during spring training.

Facing a loaded Rockies lineup in the hitter’s paradise known as Coors Field, the rookie pitched like a 10-year veteran, slicing and dicing through the lineup like a hot knife through butter. His only mistake was a throwing error in the first inning that led to a two-run homer by Trevor Story, but other than that blemish, Lucchesi showed why his teammates in the minors called him “Joey Fuego”.

He threw 82 pitches, and 56 of those pitches were thrown for strikes. His curveball had opposing hitters buckling at the knee as they flailed their bats at a ball dancing out of the zone.

Four of his eight strikeouts came at the hands of his curveball, with even 2017 Silver Slugger Nolan Arenado falling victim to the “Uncle Charlie”. 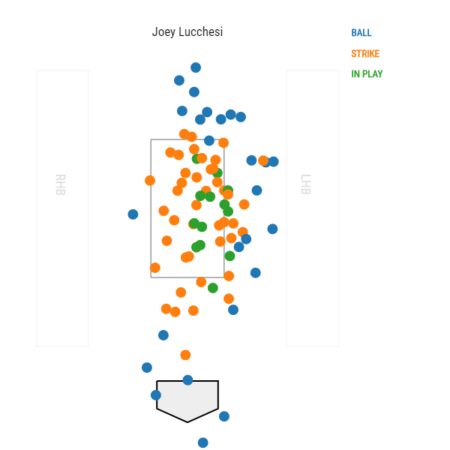 The altitude had little effect on Lucchesi, but he had begun to wane in the final innings and finally faltered in the seventh, surrendering a triple and a walk before being lifted for a reliever. It was still an impressive outing for Lucchesi and one that he hopes to build on.

The bullpen did their part as well and have continued a strong run of play after an impressive showing in Houston. Despite being down Kirby Yates, the relief corp held steady and bridged the gap to closer Brad Hand without a hitch. Kazuhisa Makita got three consecutive outs after coming on in relief for Lucchesi and induced a popup from Pat Valaika to end the inning.

The eight inning saw Robbie Erlin and Adam Cimber combine to throw a perfect inning in under ten pitches with Erlin throwing seven and Cimber two. Erlin retired left-handed hitters Mike Tauchman and Carlos Gonzales, while Cimber was called on to handle DJ LeMahieu. After the eighth, Hand was called on to slam the door and, despite giving up a single, got a double play from Arenado and a lineout from Story to end the game. Hand has bounced back from a weak start and Andy Green‘s bullpen is already looking to be one of the most underrated in baseball.

Hitting coach Matt Stairs must be driven crazy by some of the hitting approaches taken by his batters, especially the younger ones. The biggest offender may be Hunter Renfroe, who struck out badly twice on pitches outside the zone and below his knees. Tyler Anderson had some of the hitters fooled badly this game, as his pitch location had many a San Diego batter swinging at air and making them fall behind in the count.

San Diego had only three walks, and two of those were collected by Eric Hosmer. The Padres have to start seeing more pitches and walking more if they intend on getting on base at a consistent clip.

With a little help from the altitude, San Diego was able to collect a couple home runs to help them win the ballgame. First up was Austin Hedges, who clubbed an Anderson cut fastball to left center field for his second home run of the season. To see Hedges hit that is an encouraging sign, but he must still show a proper ability to hit those with consistency.

Next was Renfroe, who must be feeling the pressure with the impending arrivals of Wil Myers and Franchy Cordero. While the strikeouts were bad, Renfroe still showed off the power that made him a top prospect and a first-round pick, redirecting a cut fastball from Bryan Shaw over the right field wall for a three-run home run. For three runs to score on a home run was an encouraging sign for the Padres as they hit 189 home runs last year, but many were solo home runs.

Despite the home run, Renfroe still seems like the odd man out when push comes to shove. He still shows an over-aggressive display at the plate and has been outperformed by many of his teammates. Renfroe may be the one boarding a plane to El Paso when Cordero and Myers come off the disable list.

In an at-bat in the ninth inning, Manny Margot took a 95 MPH fastball straight to the side of his ribs. He was unable to move his arm to protect himself in time and the “thump” of the baseball hitting him could be heard by viewers at home. He was quickly ushered away from the game by the trainers and only time will tell if the speedy center fielder will avoid a spot on the DL.

The Padres have taken the series from the home team Rockies and will look to bring out the brooms tomorrow and get their first sweep of the season at 12:10 PM.

I am currently attending San Diego State University while working on achieving a major in journalism. At SDSU, I write for The Daily Aztec while also hosting the sports radio show "Picked Off", for KCR Radio. A loyal fan of San Diego sports, I hope to bring content that you will enjoy reading.
Tags: Joey Lucchesi, Padres, Padres vs Rockies, San Diego Padres

1 thought on “Framing the Friars: Padres Take Series from Rockies”