Despite a low-scoring affair by both teams, the San Diego Padres were able to claw a victory from the Pittsburgh Pirates 3-2.

Thanks to a quality, if wild, effort by Tyson Ross and timely hitting by Eric Hosmer and Franchy Cordero, the Padres were able to put a notch in the win column. Let’s take a look at some takeaways from the game:

Ross didn’t bring his best stuff tonight, evidenced by the fact that he walked the first two batters of the game. He fetched a double play from Corey Dickerson, but a long blast by Josh Bell sent Cordero drifting back, and he ultimately missed the ball, sending Adam Frazier home with the first run of the game.

Another walk in the third inning would lead to another run scored as Dickerson sent a Ross pitch to left field and Frazier beat out a Cordero throw home. This would be the final run that would be allowed by Ross for the night, as he picked up the quality start by throwing six innings of two-run ball on five hits, striking out two. His command was wavering throughout the game, however, and his slider wasn’t biting as it had been in his previous outings.

Ross threw only 59 pitches for strikes, and he hit the century mark for pitches with 100 by the end of his outing. Ross usually has a lot more control of his pitches, but he was still able to generate more groundball outs than he did flyball outs. 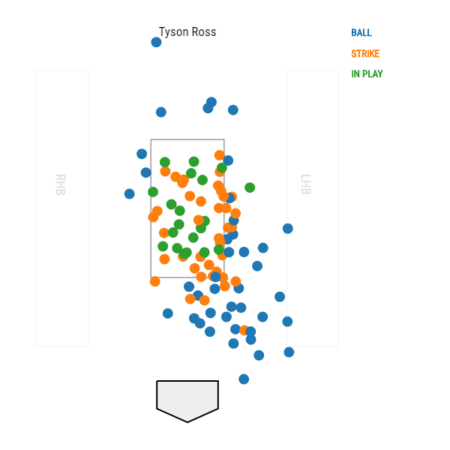 While it was a bit sketchy, the Padres’ bullpen did their job of shutting down the Pirates’ offense, even if they did make the fans at home hold their breath a little bit. Kirby Yates pitched the seventh inning and, after a flyout, plunked Gregory Polanco with the first pitch. Polanco proceeded to swipe second and third base, but his efforts went for naught as strikeouts by Dickerson and Colin Moran ended the inning.

Craig Stammen was the next man up and he would get two very quick outs, but he got dinged by back-to-back slow rollers that went for infield hits. Stammen’s control failed him at a crucial point, walking Frazier to load up the bases, leading Andy Green to play the best card in his hand (pun fully intended) by calling for his closer, Brad Hand.

Hand, seemingly with a flair for the dramatic, watched as Polanco worked a full count. With the stage set for a show for the home team, Polanco bounced out to Freddy Galvis as Hand successfully walked the tightrope. The final inning would end not with a Pittsburgh hurrah, but with a whimper as despite a leadoff double by Dickerson, back-to-back strikeouts and a groundout ended Pittsburgh’s hopes for a walk-off.

The bullpen continues to be a shining point for San Diego, and thanks to Ross throwing six innings, it led to the perfect opportunity for the setup men, Yates and Stammen. Yates, Stammen, and Hand have formed one of the most underrated back-ends of a bullpen in baseball, and they continue to showcase this to opposing hitters across the league.

The Padres’ offense was still lackluster, but for tonight, three runs on six hits was just enough to scrape past the Pirates. After falling behind 2-0 early in the game, the Padres wouldn’t strike back until the fourth inning, when Travis Jankowski, who has been a consistent presence as the leadoff hitter, slapped a single to left field. The scrappy outfielder with the flowing locks then swiped second base and scored on a ringing double by Hosmer. The inning was extended thanks to a missed catch error by starting pitcher Ivan Nova and Hosmer scored on a groundout by Raffy Lopez.

Broadcaster Mark Grant has a saying whenever a batter checks his swing, telling his fellow broadcaster that the half swing “would’ve been a double if he swung.” The saying finally became true to a point as, on a check swing, Hosmer poked a Nova offering into left field. Hosmer turned on the jets and hustled his way to second base, beating out the throw and sliding in safely at second base, leading to some hearty chuckles and jokes by Grant and Don Orsillo in the booth on Grant’s saying.

The very next batter was Cordero, and his slap hit to left field allowed Hosmer to put on his best Forrest Gump impersonation and sprint home to beat out a wild Dickerson throw to take the lead for the first time in the game. San Diego took the lead and ran with it, hanging on for a narrow victory, but a victory nonetheless.

With his two extra-base hits, Hosmer was able to extend his hitting streak to seven games. He has done exactly what the Padres have expected him to do when they signed him to a record eight-year, $144 million deal; provide some thump in the lineup and provide veteran leadership while playing solid defense at first base. Jankowski has also been a breath of fresh air for the Padres at the leadoff spot, spraying the ball to all sides of the field while being a menace on the basepaths as he looks to keep his spot on the roster when Wil Myers and Hunter Renfroe return.

Padres in the leadoff spot:

The Padres are back at it tomorrow as Clayton Richard takes the hill for the visitors, while the Pirates will be sending out Nick Kingham in his third major league start.

I am currently attending San Diego State University while working on achieving a major in journalism. At SDSU, I write for The Daily Aztec while also hosting the sports radio show "Picked Off", for KCR Radio. A loyal fan of San Diego sports, I hope to bring content that you will enjoy reading.
Tags: Padres, Padres MLB, Padres vs Pirates, San Diego Padres, San Diego Padres vs Pittsburgh Pirates

I am currently attending San Diego State University while working on achieving a major in journalism. At SDSU, I write for The Daily Aztec while also hosting the sports radio show "Picked Off", for KCR Radio. A loyal fan of San Diego sports, I hope to bring content that you will enjoy reading.