The San Diego Padres were back home Friday night and were finally able to re-insert Eric Hosmer and Christian Villanueva into the lineup.

The addition of those two bats did little to help charge up the Padres offense, as Jacob deGrom and the New York Mets completely snuffed out the Friar hitters with a score of 5-1. Let’s look at some takeaways from the game.

By no means was Clayton Richard terribly bad in his start. He powered through six and two-thirds innings while throwing 57 of his 88 pitches for strikes, walking three batters while punching out four. He only allowed one run through those innings, an RBI single by Todd Frazier which brought home Asdrubal Cabrera. He coaxed two double play out of the Mets hitters while consistently getting ground ball outs.

It wasn’t until his final inning where he got into trouble. After allowing back-to-back singles and letting them advance into scoring position on a sacrifice bunt, Richard got a ground ball out to get the second out. Andy Green would then make a move for the bullpen, calling upon veteran stalwart Craig Stammen. His first pitch to Cabrera was swatted into right field for a three-run home run, sucking the wind right out of the Padres’ sails.

Many seemed to question Green’s decision to take out Richard with two outs, but hindsight is always 20/20. The Padres, and especially their bullpen, are grateful for Richard going so far into the game after the results of their other starters forcing the Padres relievers to head into games early. Richard will look to get more run support in his next outing. 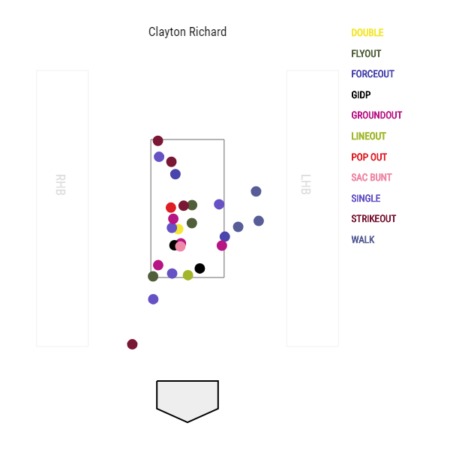 The Padres’ offense came into the game with as much ferocity as a mewling kitten. Having scored a whopping two runs in eighteen innings, the Padres were able to bring back Villanueva and Hosmer into the lineup while hoping for some better results. However, the results did not come as the Padres managed six hits and four walks as deGrom shut them down for seven and a third innings, striking out eight Padres and allowing no runs on five hits and three walks.

The Padres could only muster one run, coming off the bat of Franchy Cordero. He took a fastball from Matt Harvey and blasted it to deep center field, with the ball’s exit velocity being clocked out 103.2 MPH. Cordero has shown this power on simple ground balls, but must put the bat to the ball in order to harness that power.

Hosmer nearly had a home run of his own, blasting a ball deep into the San Diego night. However, he may have hit the ball a bit too high, as it came crashing down centimeters away from the wall and into the glove of Michael Conforto, who had to leap at the warning track to secure the catch.

While Villanueva was able to extend his hitting streak to ten games, the other Padres hitters still couldn’t string together hits to put runs on the board, a problem they have been having for the past week. Matt Stairs and Johnny Washington will have their hands full with trying to make these Padres hitters more patient at the plate.

San Diego will try to get back into the win column tomorrow as Joey Lucchesi will toe the rubber for the Friars, while the offense will look to spoil the debut of Mets starter Jason Vargas.

I am currently attending San Diego State University while working on achieving a major in journalism. At SDSU, I write for The Daily Aztec while also hosting the sports radio show "Picked Off", for KCR Radio. A loyal fan of San Diego sports, I hope to bring content that you will enjoy reading.
Tags: Jacob deGrom, MLB, Padres, Padres vs Mets, San Diego Padres, San Diego Padres vs New York Mets