Opening Day 2018 has come and gone and the San Diego Padres find themselves in a very similar position to recent years with an 0-1 record.

However, the Padres were not blown out as they have been in back-to-back matchups against the Los Angeles Dodgers. Instead, the Padres dropped a 2-1 heartbreaker to the Milwaukee Brewers in 12 innings. With one game of 162 in the books, let’s take a look at some key takeaways from the first game of the baseball season.

The Padres Still Have A Pretty Glaring Issue

A lot was said in the offseason about the addition of Matt Stairs and how his prowess would change the Padres approach at the plate. It’s obviously only one game, but the Padres look a lot like the Padres of last year. With 14 strikeouts on the day, a large amount for even the Padres, it appears like the Padres still have the same swing and miss problems that they did in 2017.

Nine different Padres struck out in total, including two for each of Eric Hosmer and Wil Myers and four (!) for Austin Hedges, and six of the starting eight in the lineup went down on strikes. Of those 14, 10 were swinging strike outs and the Padres swung and missed at 22 pitches in total. It seemed that no one was immune from the strikeout bug today for the Padres. On top of that, the Padres only got six hits in 12 innings and left 18 runners on base. But they did work six walks which may something to watch moving forward.

After mashing four home runs in his first four spring training games, it looked like Austin Hedges was going to be a much improved player in 2018. Well, so much for that. To better understand just how bad Hedges was at the plate today, let’s take a look at the pitch chart from his at bats. 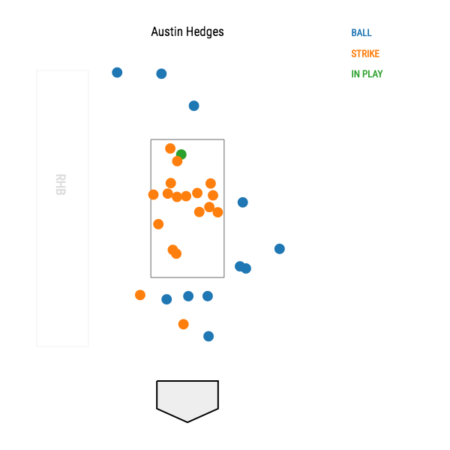 Hedges saw 30 pitches in total and managed to make contact with only seven of them, including six foul balls. Hedges did put the ball in play once, but he also managed to strike out four times. 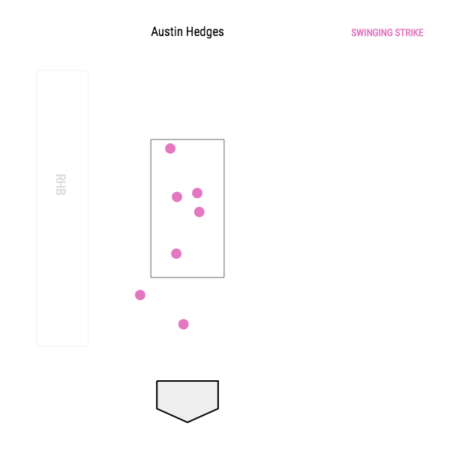 Most alarming is the fact that Hedges swung and missed at seven different pitches, including four fast balls that all caught a lot of the plate. It’s just one game, but this already looks eerily familiar to what we saw from Hedges last year. If his pitch recognition continues to be this bad, he could be in for yet another rough year at the plate.

Clayton Richard Still Has Something Left in the Tank
It’s easy to make fun of the Padres because Clayton Richard was their Opening Day starter, but he put on a solid performance against the Brewers. The line wasn’t eye-popping, with seven innings, one earned run, six hits, and four strikeouts, but Richard was able to get the job done against a dangerous Brewers’ lineup. Richard did give up four hits that were over 100 mph, but he was able to limit damage and get himself out of jams. One of the league leaders in ground ball percentage last year, Richard got another eight of his 21 total outs via the ground ball, showing he still is more than capable of pounding the bottom of the strike zone and getting ground ball outs.

San Diego Padres’ Infield Defense is Much Improved
With the additions of both Freddy Galvis and Chase Headley, it was evident that the Padres would be much improved on the left side of the infield. And they did not disappoint in game one.

Eric Hosmer and Wil Myers Did…. Nothing
So an 0-9 batting line with four strikeouts is probably not what you want from your two and three hitters in the lineup. However, it’s only one game so it’s hard to read too much into it. With that being said, both of these guys will be scrutinized very closely this season so it’s important that both get off to a hot start this year. We will see how they bounce back in game two.

It always takes our offense awhile to get going when they play in San Diego folllowing being in ST in AZ. Myers looked real bad at the plate and should of atleast made a throw to the plate on the game winning hit. Headley can get on base with walks but he needs to deliver especially when all we needed was a fly ball to win the game. Can’t wait till we get to see Renfroe and Villanueva play a full game with 4 AB’s each. Headley can’t hit from the right side at all anymore. Overall we need to win games like this when our pitching does this well.