Coming off a few very nice outings against two of the N.L.’s best, Luis Perdomo entered his start on Wednesday with confidence that he could keep the streak going.

Through two innings, he seemed to be well on his way. In the first inning, he worked around two walks en route to a scoreless inning.

The most impressive pitch of the first was a filthy 95 MPH two-seamer (with sink) to strike out Paul Goldschmidt.

Perdomo then recorded a 1-2-3 inning in the second, recording a ground out and two line outs.

He broke Rey Fuentes‘s bat with a 96 MPH two-seamer to record one of those outs, but the other two were hit relatively hard. Still, though, no real concern.

It all began with a matchup against the opposing pitcher, Zack Grienke. Perhaps this was the key at bat of the entire inning. After quickly going up 0-2 in the count, Grienke battled his way back to a full count before grounding out to short. Although Perdomo recorded an out, exhausting nine pitches to the opposing pitcher is not exactly ideal. I mean, Grienke is no slouch at the plate. But you would like to make quick work of him and not use up a lot of bullets. 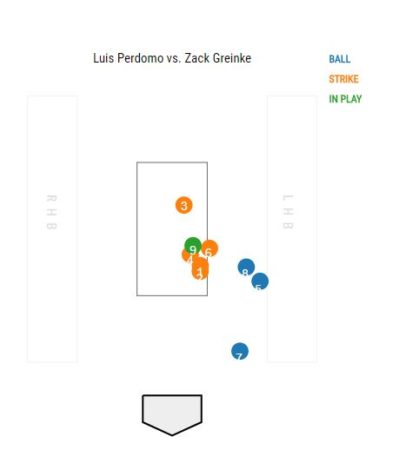 Perdomo quickly retired Daniel Descalso on a ground ball to first, and all seemed to be going just fine. By retiring Descalso, the Padres’ 2015 Rule 5 pick had reached a streak in which he had only allowed two left-handed hitters to reach base (via two walks) in their last 19 tries. This was an impressive streak for Luis, who, as it is very well documented, has his struggles in trying to retire left-handed hitters (.310 BAA, entering Wednesday’s game).

With two outs, Perdomo walked David Peralta for the second time in the game. It is worth noting that in Perdomo’s last start against the D-Backs, in which he gave up 8 ER in three innings, Peralta was 3-3 against him.

Following Peralta was Paul Goldschmidt, who had actually struck out against Perdomo for the first time in his career (a span of 14 AB’s) a few innings prior. After getting ahead with a fastball and dropping in a slider to get ahead 0-2, Perdomo tried to get Goldy to chase, throwing three consecutive sliders (one fouled off, the other two for balls). Trying to get him to nibble, Perdomo threw two straight two-seamers out of the zone to walk his second straight hitter. Goldschmidt entered the game 7-13 against Perdomo with two home runs…. so perhaps, like he did Peralta, Perdomo gave Goldy a little bit too much respect after getting ahead in the count.

Then, the real damage came. Perdomo got ahead of Jake Lamb on a 97 MPH fastball for a strike, and then, well….

As you can see, Luis Perdomo flat-out hangs a slider and Lamb doesn’t miss it. The ball goes a LONG way:

Hitters have actually only hit .161 off Perdomo’s slider this year, but not many have seen a slider like he threw to Lamb. It was really just a bad pitch, and it got absolutely hammered. Lamb, a very good hitter, did exactly what he should have done: deposit it into the seats.

Just like that, Perdomo and the Padres went from up 2-0 to down 3-2. Perdomo was visibly distraught on the mound, and what followed next could really be a teaching moment for Andy Green and his coaching staff to capitalize on. As if the inning wasn’t frustrating enough, Perdomo pumps in a couple of strikes to Chris Owings. Owings fouls a 0-2 pitch off and then lays off a couple of pitches out of the zone. On the sixth pitch of the at bat, Owings rolls a weak ground ball to Ryan Schimpf for an infield hit.

Two walks, an absolute bomb, and an infield single. All with two outs. To try to help calm the 24-year-old down, Darren Balsley takes a visit to the mound. Perdomo gets back on the mound and delivers pitches out of the zone to Brandon Drury. Luis, trying to throw a get-me-over fastball, throws one of his slower fastballs of the night; clocked at 92 MPH:

Drury doesn’t miss it, and Perdomo’s reaction says it all.

It is possible that Perdomo didn’t let the frustration prior to the Drury at bat get to him, but there definitely is a chance that it did. Prior to Lamb, it is not exactly like Perdomo was really getting lit up out there. Adding to the fact was that the home plate umpire wasn’t giving him any leeway. In the second inning, Perdomo visibly was upset with a few pitches that were not called strikes, and that trend continued in the third.

There have been a few times where I have seen Luis Perdomo animated during his young career, and this third inning was probably the most animated of all. He was really frustrated, which:

Luis Perdomo has a bright future with the Padres, but there are definitely some things that he has to get over. It is really no different with any other player. This third inning ultimately cost the Padres the game, but there’s definitely a chance that it will benefit Perdomo moving forward, and that should be the hope of the Padres and their fans in the midst of a losing season.