The Padres came into this series on a little bit of a high note.

They closed the book on the Nationals series with a 5-3 win to split the road trip at 3-3. The Chicago Cubs were the next test for the young Padres. After a hard slump before the road trip, I was expecting for this series to start a new slump, as the reigning World Series champions are no pushover.

To our pleasant surprise, the Friars went out there and took game one with a strong 5-2 victory.

Second game, rookie Dinelson Lamet took the mound and pitched his second straight gem to lead the Padres to a 6-2 victory.

On Wednesday, the Padres took the field led by their young gunners looking to make a name for themselves.

Luis Perdomo took the mound Wednesday afternoon, and was absolutely dominant in his 7.0 innings pitched; he struck out four batters and allowed just three hits and one earned run. He also forced 10 groundouts, four fly outs, and a line out to notch a 2.59 ground ball-to-fly ball ratio.

One of the biggest successes for Perdomo was against the Cubs’ left-handed hitters. If you are unaware, the former Rule 5 pick has struggled greatly against the lefties this season. Below you can see the split between lefties and righties for Perdomo on the season:

Perdomo has faced 27 fewer lefty batters this season, but has allowed three more hits, just three fewer runs, and has given up four more extra-base hits than against righties. The biggest numbers that jumps out are the .370 batting average and the .562 slugging percentage that left-handed hitters have been rocking Perdomo with, as opposed to the low .238 batting average and .360 slugging percentage that right-handers are hitting against him. 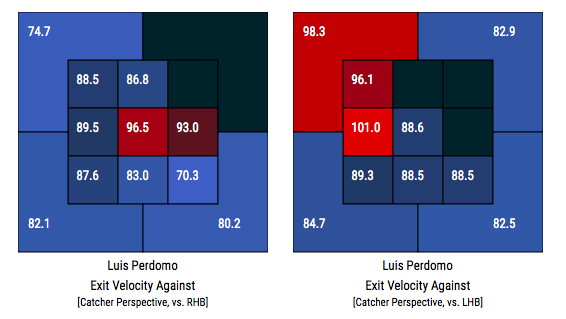 You can see in the chart above, Perdomo is consistently giving up hard contact to lefties on the outside of the plate, as opposed to right-handed hitters only getting any type of solid contact over the middle of the plate.

Today, however, was a completely different story for the young pitcher. The Cubs’ lefties hit for a combined 0-18 with three strikeouts on the day. Only one left-handed batter reached base today; former Padre Anthony Rizzo was hit by a pitch and later brought around by a Javier Baez single that ended up being the Cubs’ only run of the game. You could argue that the “single” should’ve been ruled an error, as Ryan Schimpf fumbled the ball after fielding it, allowing Baez to reach base and prevent the third out from happening.

In fact, the lefties also combined for three of Perdomo’s four strikeouts on the night and for six of Perdomo’s 10 forced ground outs.

Luis Perdomo was still unable to get that elusive first win on the season despite working a quality start today for the Friars. He pitched in a Padre-record six games to start the season without being credited with a decision. Now, nine games into the season for Perdomo so far, and only two of his games have given him a decision (both losses).

Franchy Cordero came to the plate 0-3 on the night in the bottom of the 8th inning. He ripped a one-out triple to give the Friars their first base runner since the fifth inning, and put them in position to break the tie.

Yangervis Solarte stepped in the batter’s box and grounded to Javier Baez, who immediately ripped the ball home where Cordero was speeding his way to the plate.

Brandon Maurer came in the top of the ninth and closed the door on the Cubs with three straight outs to secure the sweep for the Padres. A thrilling series for the Friars, capped-off with a thrilling performance by the Padres very first up-and-coming wave of talent.

Derek is a 22-year-old out of Lemon Grove, California. A burning passion for San Diego sports led him to pursue an opportunity to write and share about what's going on with the teams in America's Finest City. A young and aspiring sports journalist looking to grow his knowledge and expand his experience at any opportunity.
Tags: Franchy Cordero, Luis Perdomo, Padres, Padres vs Cubs, San Diego Padres, San Diego Padres vs Chicago Cubs