Following a 3-3 start to the year and a change at offensive coordinator, San Diego State enters the second half of its season with its Mountain West championship aspirations in tack. The final six games of the season will reveal who the Aztecs are in 2022 and shape the offseason priorities for the coaching staff.

At the start of the year, Fresno State was the pick to win the West Division and looked the part before their star QB Jake Haener suffered an ugly injury against USC. Rumors are swirling that he will return, but risking an NFL career for a team Haener tried to leave in the offseason might be a stretch. The Bulldogs are 1-1 in conference.

UNLV took the favorite role for a few weeks after a close loss at CAL and a convincing road win over reigning champion Utah State. They came back to earth in recent weeks and currently sit 2-2 in MW play.

San Jose State appeared to be the class of the division after a 4-1 start, including dominating wins over UNLV and Wyoming. With its only blemish, a close loss on the road to Auburn, the Spartans even received votes in the national polls. Then they laid an egg at Fresno State this past Saturday. They are 2-1 in conference this year.

Like the rest of the division, San Diego State has not looked like a champion this season, but one of the four teams listed here will represent the West against the best team from the Mountain Division. SDSU can get there with two losses if they defeat all of their division rivals. Any slip-ups against SJSU, UNLV, or Fresno State will make the task much harder.

A Down Year for the Defense

Three years after Rocky Long left SDSU to take over the defense at New Mexico, the Lobos currently rank higher than the Aztecs in points per game, rush defense, and pass defense. Overall, UNM is fourth in the conference giving up 329.6 per game, and SDSU ranks 10th out of 12 teams surrendering 394.2 yards a contest.

Like all statistics, these numbers only make sense with an explanation. The story of SDSU’s defense in 2022 is it has been dominant in stretches in every game but also faltered in each contest. The defense has also carried the team to three wins. Where it matters most, they still rank in the top 50 in the country in scoring defense at 23.8 points a game. That mark is fifth best in the MW, however, one spot behind Long and the Lobos.

2022 has not been the year of the QB in the Mountain West. SJSU’s Chevan Cordeiro is the only signal caller in the league in the NCAA’s top 50 in yards per game. Cordeiro is 33rd in the country, averaging 268 yards each contest. UNLV’s Doug Blumfield is the conference’s second-best QB, statistically. He averages 205 yards, which ranks 85th nationally. Only two others average 150 or more yards a game.

If only conference games are included, Mayden enters the second half of the season with the eighth most passing yards in the league. Amazingly, all-conference honors are not out of the question for the converted safety.

The final six games of the year will not only reveal if Mayden’s amazing 322-yard performance against Hawaii was an anomaly, but it will also let the staff know what they have at the position heading into the offseason. Mayden still has his Covid year of eligibility left, and if he can close 2022 well, it would put his QB career back on track and set the QB room up well for the coming years.

If Mayden is effective passing the ball, it will take pressure off the entire team and stabilize a position that is presently reeling. Mayden is humble, coachable, and focused on the team. He is the perfect person to lead the QB room, but only if he is successful on the field. Should he not live up to the standard he set a few weeks back, SDSU will be in the market for a transfer QB to compete in 2023. 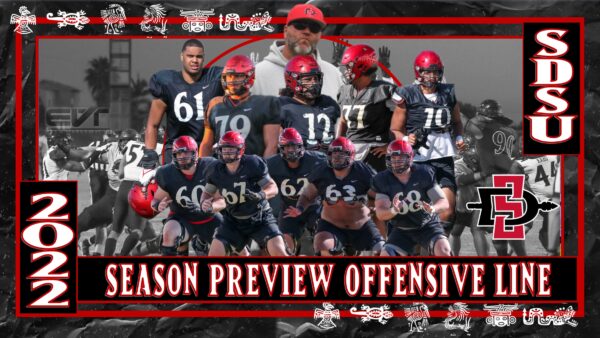 The OL of the future is now.

Center Alama Uluave is playing in his final games as an Aztec. After this season, LT Brandon Crenshaw-Dickson has two years of eligibility remaining. LG Cade Bennett, RG Ross Ulugalu-Maseuli, and RT Josh Simmons all have three years left. Behind the starters, Kyle Trombley is the only upperclassman in the group, and he still has two years. On paper, this line should be one of the best in the conference in 2024, if not sooner.

Signs of the offensive line becoming what the recruiting rankings and their obvious talent suggest should start showing in the second half of this season. Cohesion has been lacking with this group to date. They still resemble a collection of individuals rather than a unit that is better than the sum of its parts.

Good offensive lines gel together. Less gifted athletes that know how to play with their teammates are often more valuable than athletic specimens that play on their own. Finding that chemistry is the next step for this group. Following a bye week, this would be the ideal time to start progressing in this area.

My earliest sport's memory involve tailgating at the Murph, running down the circular exit ramps, and seeing the Padres, Chargers and Aztecs play. As a second generation Aztec, I am passionate about all things SDSU. Other interests include raising my four children, being a great husband and teaching high school.
Tags: #GoAztecs, Aztecs, Jalen Mayden, MWC, SDSU