I recently had the opportunity to talk to Ryan Miller, a former prospect for the San Diego Padres and resident of my hometown of Hemet, California.

He was drafted by the Friars in the 14th round of the 2013 MLB Draft out of San Bernardino Valley College.

For those who are unaware, he spent four seasons in the Padres’ system before he asked for his release from the team following the 2016 season.

To get things kicked off, I asked Ryan Miller about our hometown. For those (most) who don’t know, Hemet is a small-time town off the CA Interstate 15 in southern California. I asked what it was like being that guy to make it big time out of the small town. He responded, “It was pretty cool! I got a lot of attention the first year or so from old friends, randoms, and met a lot of new people. I [just wish] I could be one of the guys who could have somewhat put Hemet on the map. Not many people have heard of it (laughing).” I’d say for the most part he did bring a lot of attention from Padre fans and those in surrounding cities towards our small town with his success in the game.

I also asked what it was like coming up and getting closer and closer to the league. Most big time prospects know from a young age they have a shot at the show, but for others the dream is not that clearly reachable. Miller’s thought on his experiences when coming up was that it wasn’t really that clear to him until he got to the college level. He said, “In high school I played multiple sports so I wasn’t mainly focused on baseball. I was told by numerous people to only play baseball because I could potentially be great at it, but I was too athletic and wanted to explore my options.” He added, “But once I got to college I stuck strictly to baseball all year round and it ended up panning out for me!” 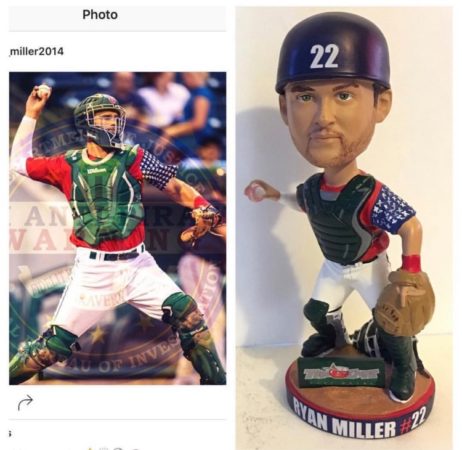 Before getting to the questions on his career, I got the chance to ask some questions which were more of pure interest than curiosity in his career. Someone on social media had posted a picture of a Ryan Miller Fort Wayne bobblehead that was really cool. As a bobblehead collector, getting my hands on a hometown professional would be amazing to add to my  collection. I asked Miller about it, hoping to find out if it was part of a nightly stadium giveaway that baseball teams are known to do so often, and if it was possible to get my hands on one. Miller informed me that, “A fan of mine went to a shop and had one personally done. I wish I had a bobblehead night and fans received them! That would be awesome.” I followed up asking about what it was like to have seen a bobblehead of himself to which he replied, “I was speechless. Couldn’t believe it!  Was so happy to see that.”

The last question I asked was about his time as a catcher. It’s pretty cliche I know, but I really wanted to know so I asked it, “Who was the most difficult pitcher you had to catch. Who was the most fun?” Ryan Miller said that he wouldn’t have any specific player that he could name. But that a lot of the international players who came over were throwing in the upper 90s with tons of sink. On which pitcher was the most fun to catch he said, “Same, I couldn’t pinpoint a single person I enjoyed catching most, and the games where you never get shook off are the best.”

Miller spent about a year in each level, starting out with low-A short season Eugene Emeralds back in 2013. By the end of that season, he had been moved up to low-A full season with the Fort Wayne TinCaps. He played all of the 2014 season with Fort Wayne and started the following season (’15) in Lake Elsinore and ended it in San Antonio. Ryan Miller played backup catcher all of 2016 in San Antonio (his final season in baseball), putting up a slash line of .232/.283/.424 with 22 extra-base hits (seven homers) and 32 RBI.

In between those stints in the minors, Miller got the chance to play some Australian League ball when he was assigned to the Canberra Cavalry in 2015. He was outstanding while playing for Canberra, as Miller slashed an outstanding .308/.345/.623 with nine long balls and 32 RBI in just 40 games.

I asked Miller about his Australian experience and what it was like compared to the minor leagues. He had nothing but good things to say. “Yeah I had the best time of my life. Great people, great sights and awesome baseball.” On the talent level of the Australian league he said, “I would compare it to like a High-A and Double-A play.. but there are some ex major league guys, guys from Triple-A all the way down to rookie ball. It was fun, competitive baseball. Played to win and have fun.”

Ryan also got some opportunities to play in spring training for the Padres. On that experience Miller had this to say, “It’s surreal. Nothing I’ve ever experienced before. Very relaxed but still everyone was on a mission. Most guys are cool up there and just want to help!”

He spent all of his professional time with the Padres and had a lot of different influences while with the team. He had two people from the beginning towards the end of his career that had a big impact on him both on and off the field. The first was his former manager, Michael Collins, who was himself a catcher as well. He was with Collins in both Fort Wayne and Lake Elsinore and had mentioned that Collins was always helpful in giving him the pointers and tips he needed as a catcher. Towards the end of his career, current El Paso Chihuahua catcher, Rocky Gale, had a big impact on Miller. Miller said, “Rocky Gale was one guy towards the end of my career who took me under their wing. I’ve never met a more kind, caring, just awesome dude.. very selfless . He outworked everybody. He got some big league time but didn’t let that affect anything.”

Now, Miller’s request to be released came as of surprise to many Padre fans and farm system followers. He was a young catcher that worked hard, had potential, and had promising upside. So I asked what were some of the things that led up to his release and how difficult of a decision it was for him to make. Miller said, “Well my first year in Double-A I was backup and the following year (the year I asked for my release) I was told I’m gonna be the backup [again]. It was hard cause I wasn’t given a chance I thought I deserved and we all know minor leaguers don’t make good money so I had a decision to make.” Miller needed to do what was best not only for himself, but for everyone in his future, “So I’m going to finish my degree and start a career in that aspect. But it was one of the toughest decision I’ve made.” I also asked if Miller had planned on baseball being in his future at any point to which he gave said, “I hope so, I would love to coach. I just have to find the right opportunity.”

He was fun to follow and watch grow during his time with the franchise. So I hope you all send your best wishes for whatever path he decides to go down.

Derek is a 22-year-old out of Lemon Grove, California. A burning passion for San Diego sports led him to pursue an opportunity to write and share about what's going on with the teams in America's Finest City. A young and aspiring sports journalist looking to grow his knowledge and expand his experience at any opportunity.
Tags: Lake Elsinore Storm, Padres, Padres Ryan Miller, Ryan Miller, San Diego Padres