The first week of the MLB season is now in the books, and the San Diego Padres have limped to a 1-6 record.

It’s not for lack of trying though, as the Padres have stayed competitive in just about every game they have played in. In fact, their run differential has been pretty respectable, as they have given up 33 runs to 24 runs scored. Even with the struggles, there have been some highlights.

Christian Villanueva mashed three home runs in one game, Joey Lucchesi had a successful big league debut, and there have been some highlights in the pitching staff.

The Padres haven’t necessarily played well in the first week of the season, but they also haven’t looked horrible. The major league season is a definite grind, and the Padres are just getting started.

Today marks the return of Five Stat Friday, a weekly article on East Village Times highlighting five important stats from the past week of baseball, or stats that could be important to watch moving forward. Given the Padres have played only seven games, all the small sample size caveats apply this week.

The season may be young, but it’s clear that the launch angle revolution is still in full effect in 2018. And nowhere is that more true than in San Diego. It is definitely a small sample, but as a team the Padres have done a good job of lifting the baseball over the first seven games of the season. Currently, there is not a single regular on the team who has a launch angle under 10 degrees. With launch angle climbing around the league, it’s clear the Padres are also buying in under the tutelage of new hitting coach Matt Stairs.

The most interesting thing about this graph is that the players furthest on the left, from top to bottom: Cory Spangenberg, Christian Villanueva, Eric Hosmer, Jose Pirela, and Wil Myers, have some of the best exit velocities on the team but the lowest launch angles, although Myers may be a bit of an outlier in the graph. Move further to the right, and you find Manuel Margot next to Matt Szczur. We’ll touch more on Margot in a minute. Below them you find Freddy Galvis with a launch angle around 18 degrees and a exit velocity just above 80 mph, which has been a successful combination for him so far, and right in line with his numbers from his last two years in Philadelphia.

Past Galvis on the graph is Carlos Asuaje, who is making harder contact than Galvis with a slightly higher launch angle. From there, you find Chase Headley, Hunter Renfroe, A.J. Ellis, and Austin Hedges. For those unaware, the most successful launch angle is somewhere in the 12-20 degree range, as that provides the optimal lift for getting the ball out of the infield. Anything consistently higher than 30 leads to pop ups and fly outs, something which seems to be plaguing Austin Hedges with a launch angle of nearly 40 degrees. Let’s look at one more graph, this time comparing launch angle to wOBA (Weighted On Base Average). 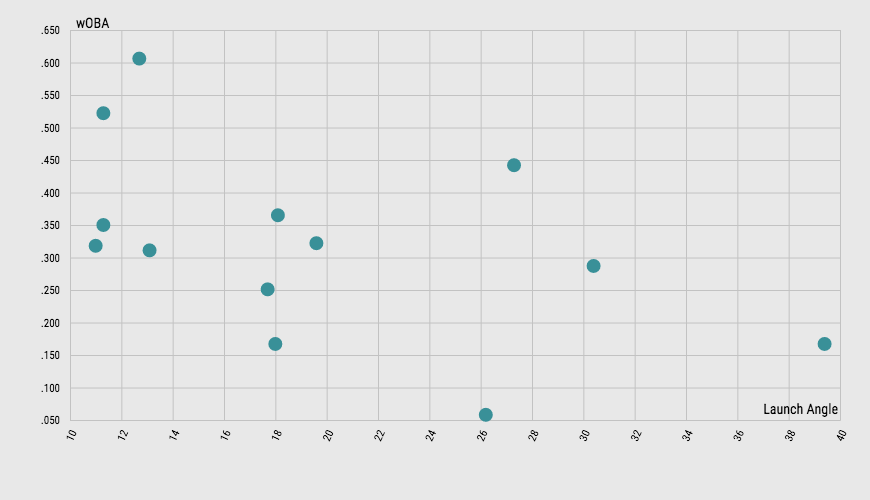 I won’t go too far into the specifics here because this graph matches well to the one posted above, although this time the players on the left have generally higher wOBAs with lower launch angles. There isn’t really much to say about this data just yet, but it’s clear the Padres have not had trouble elevating the ball to this point. The offensive success should follow in time. In other news, Jose Pirela is tied for fourth in baseball with 14 batted balls with an exit velocity of 90 mph or higher. Maybe, 2017 wasn’t a fluke for Pirela.

Also shout out to Nick Canepa, who is the number one fan of launch angle and exit velocity.

I haven’t seen Christian Villanueva’s laugh angle or exit velocity. But I guess he hit it hard enough.

Sure, Manuel Margot hit a solo home run on Thursday afternoon, but prior to that hit, Margot had started the season 2-26 with both his hits coming as singles. That’s good for a .100/.217/.100 slash line and an ISO of exactly 0. That’s hard to do. Coming into the season, many expected Margot to be in for a breakout season. One week in, his performance has left a lot to be desired.

However, there might be some room for optimism. In his rookie year in 2017, Margot saw a pretty significant uptick in his launch angle in the second half. So far in 2018, Margot has improved his launch angle even further, from 16 degrees throughout last year to 18 degrees so far this year. Now this uptick hasn’t come with more power yet, but it seems to be a matter of time before it clicks for Margot and he finds a new power stroke. The big problem for Margot has been his inability to make solid contact, as Margot has put up only an 18 percent hard hit rate. On top of that, Margot is making the wrong kind of contact overall, as evidenced by the chart below. 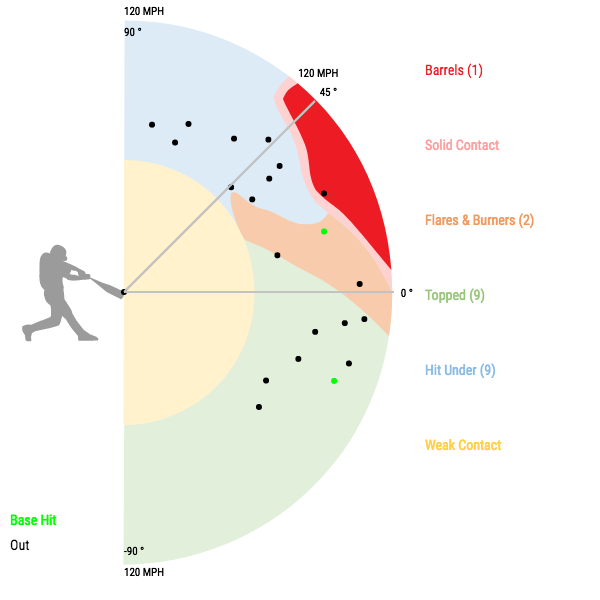 It’s pretty glaring when you see that Margot has not made any solid contact so far this season. With nine balls hit under and nine balls topped, Margot’s launch angle has been skewed by too many pop ups/weak fly outs and too many weak ground balls. Given that Margot is making more elevated contact, he should be able to break out of his slump and make more effective contact as the year progresses.

The First of the Second Wave

With Manuel Margot, Hunter Renfroe, Austin Hedges, and Dinelson Lamet marking the first wave, 2018 was going to be an important season for that group’s development. However, 2018 was also going to be an important season for the potential emergence of the second wave; that is the group of pitchers led by Joey Lucchesi. It turns out that was a fitting moniker, as Lucchesi is not only the first of the Padres deep minor league staff of pitchers to make it to the bigs in 2018, but he is also the first pitcher of the 2016 draft class to make it to the big leagues. Quite an accomplishment on both fronts given the depth of talent surrounding Lucchesi.

It was under negative circumstances that Lucchesi got the call-up, with the injury to Dinelson Lamet, but Lucchesi has not disappointed over his first two big league starts. So far Lucchesi has thrown nine and two-thirds innings, giving up eight hits, walking three, and striking out eight batters while giving up just three earned runs. In his first start, Lucchesi had some first start jitters, giving up seven hits and three earned runs in four and two-thirds innings. Lucchesi was a lot better in his second start, giving up just one hit and no earned runs in five shutout innings yesterday.

It’s still early in his big league career, but Lucchesi has shown flashes of potential. However, he did have his share of growing pains in his first two starts. 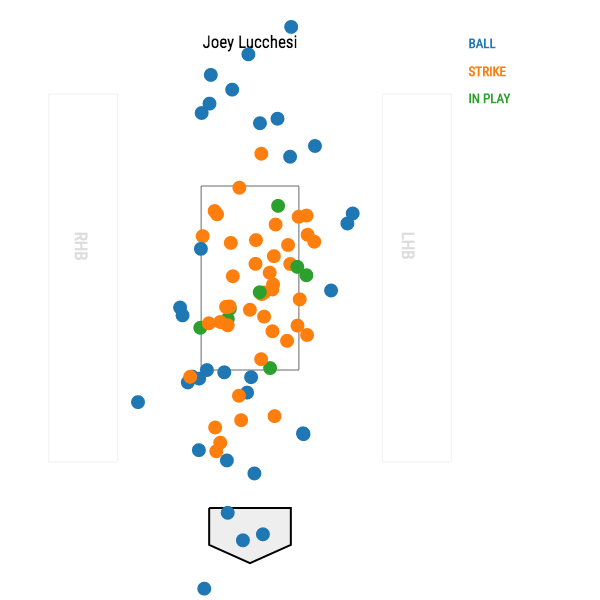 Although Lucchesi threw five shutout innings, his control was a bit lacking on Thursday. He did a great job of commanding his pitches inside of the zone, but he threw 40 plus pitches in the first two innings because of his struggle to control his pitches on the edges of the zone. Lucchesi was able to get eight swinging strikes and 17 called strikes, demonstrating his ability to fool batters. Also he showed off his top notch pick off move with a pick off of Charlie Blackmon in the first inning. This kid is going to be fun to watch. 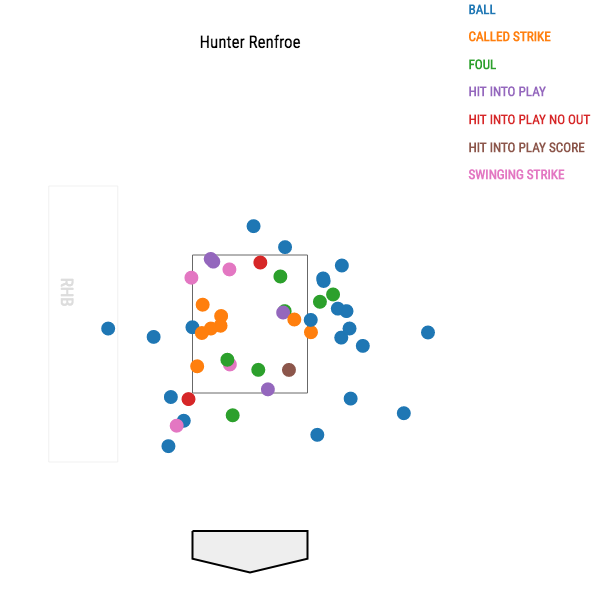 Look at all that blue. Those are all pitches out of the strike zone that Renfroe was able to lay off of. Out of the 47 pitches Renfroe has seen so far, he has only swung and missed at four of them, only one of which was clearly out of the strike zone. In total, Renfroe has an 8.5 swinging strike percentage, compared to a 15 percent swinging strike rate in 2017. It’s only been a handful of plate appearances, but maybe these are some early signs of a changed approach for Renfroe.

It was an inauspicious start for right-hander Adam Cimber, as he gave up the game winning hit on Opening Day in his first big league appearance. However, he has very quietly been one of the Padres’ most effective bullpen arms since. Cimber has only pitched two and two-thirds innings so far, including his one inning on Opening Day, but he has looked effective and the numbers back it up. Currently Cimber is sporting a 25 percent strikeout rate, a 5.00 ground ball to fly ball ratio (second best on the team), and a respectable 9.1 swinging strike percentage. 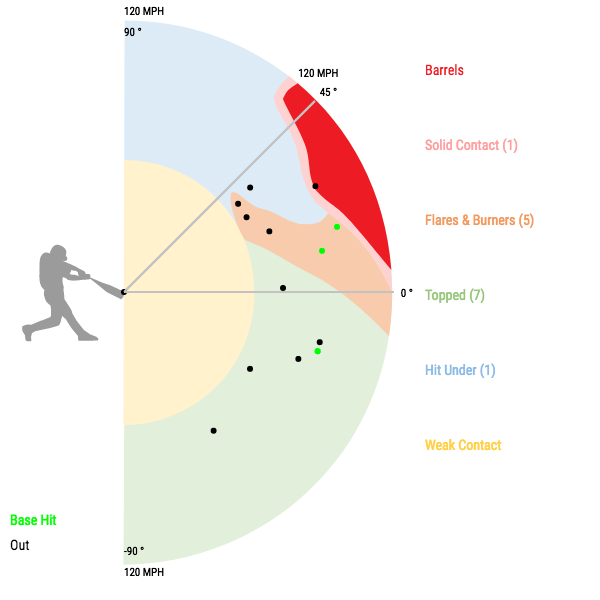 Cimber has had some trouble with solid contact, but he also induced plenty of poor contact, including seven topped balls, five flares and burners, and one hit under. He hasn’t been excellent, but he has shown that he is capable of getting big league batters out. Plus there’s this.

Editorial and Prospect Writer for East Village Times. Twenty-five years young, Patrick has lived in San Diego for his entire life and has been a Padres fan nearly as long. Patrick lives for baseball and is always looking to learn new things about the game he loves through advanced stats.
Tags: Christian Villlanueva, Joey Lucchesi, Padres, San Diego Padres