Prior to July, Clayton Richard was a solid, if unspectacular starter for the Padres.

The ground ball artist was at least pitching a good amount of innings, despite his pretty much average results.

Jump ahead to July, and Richard has started to falter in his starts — His 7.65 ERA and 18 walks in four starts speak to how drastically his performance has dropped off this month.

Figuring out what’s behind his disappointing outings in July is something a number of Padres fans are probably wondering. There have been a number of things impacting his rough month of July, but there are some aspects of his pitching that have been issues throughout the whole season.

It seems like the first thing a lot of Padres fans think of when reflecting on a Clayton Richard start, is: Sinkers on the outside corner with a lot of consistency. We’ve seen him do it for the past two seasons, and do it successfully enough to stick around as at least an innings eater in the Padres’ rotation.

Here are Richard’s pitch locations on the left, from the start of the season through June 30th.

On the right are the Statcast locations of the pitches he’s thrown in July. 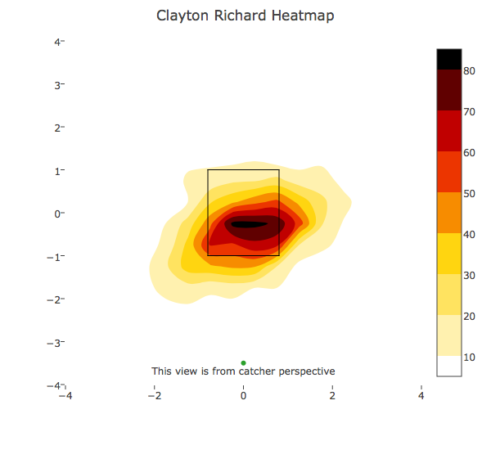 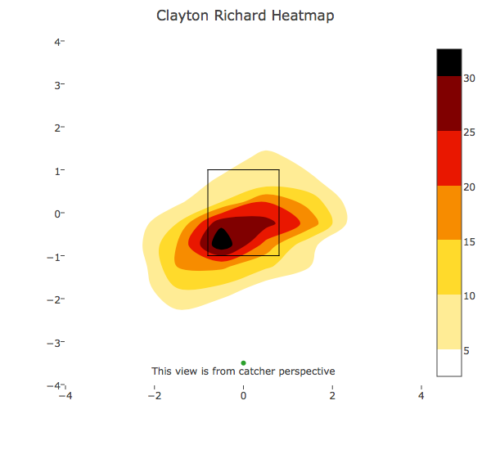 Instead of putting his pitches on the outside corner where he found decent success, in July Richard has been throwing most of his pitches a lot further inside to hitters. The results from this change in location of pitches have been pretty ugly, so it seems like he should really consider throwing more pitches towards the outside corner to right-handed hitters. With a Sinker that usually sits around 88-91 mph, he doesn’t have much room for error with his pitches — Location is especially important for a guy like Richard. July has seen him turn away from what has made him successful, and that’s resulted in a very poor four starts.

Why should he be throwing to the outside corner, though? The data backs up this suggestion that he should put throw the ball towards the outside corner again. As a pitcher who thrives on ground balls, Richard wants to throw pitches that coax hitters into hitting them. Take a look at the average launch angles of hitters’ contact in different parts of the strike zone against Richard: 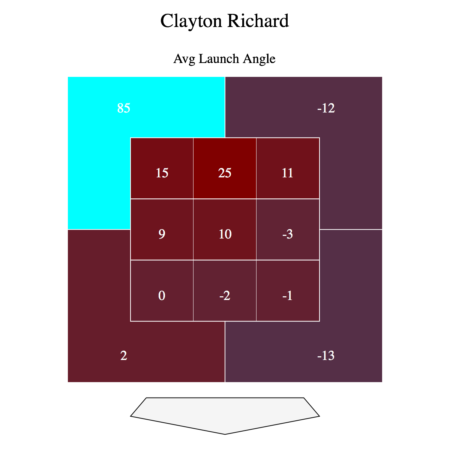 All of the lowest launch angles are in or around the outside corner — Richard gives himself the best chance at generating a ground ball when he pitches to this part of the zone. When he pitches to the lower-right hand location in the zone seen above, he basically generates Eric Hosmer‘s average launch angle (-1.3 degrees) on batted balls in play. Imagine that all-too-often, frustrating Eric Hosmer ground ball to an infielder, to visualize what kind of contact Richard could induce by locating pitches there.

Furthermore, it makes sense for him to throw to that location because it generates the lowest average exit velocity on pitches in the strike zone: 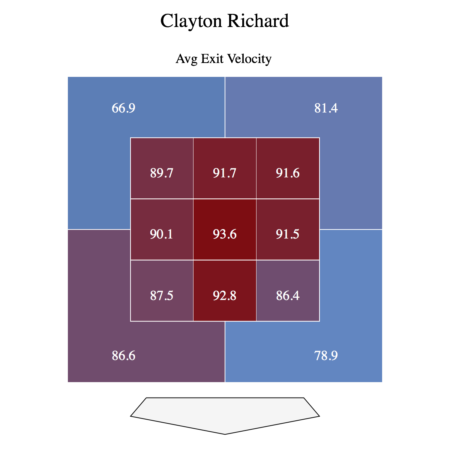 Even if he misses slightly with the pitch outside the zone, he’ll have a chance to generate even lower exit velocities, as seen in the zone reading 78.9 mph. So basically, Richard really needs to get back to throwing towards that outside corner more than anything else at this point.

Another big issue for him has been the number of walks issued in July, that have really hurt him as much as the big hits during his starts. Part of his issues with keeping the ball in the strike zone, has been his increased usage of the Changeup during this month, as seen below in his pitch usage percentage table from Brooks Baseball:

For some reason, Richard decided to start using his Changeup more often this month. In his July 20th start against the Phillies, he threw the pitch an astounding 16.7% of the time. As the month has gone on, his usage of the pitch has increased. While incorporating a pitch more often might seem like something worth experimenting with, it seems like it’s time to end the experiment.

It might be a decent idea to throw the Changeup, if Richard could throw it for strikes very well. The problem is, that he really hasn’t been able to do that with the pitch all season. Below is a chart of the locations for every Changeup he’s thrown during the 2018 season: 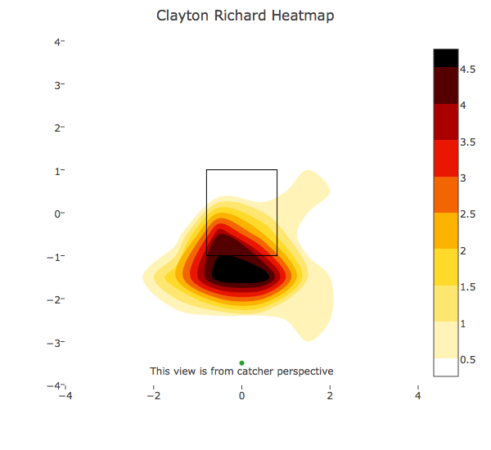 Clearly, Richard is having problems locating the Changeup in the zone. Considering the number of walks he’s issued lately, it looks like he shouldn’t be trusting the pitch as much as he has. Considering that he’s lowered his Sinker usage since his upped Changeup usage began, it would probably be a good idea for him to throw the Sinker more often again. Locating the Sinker for strikes in the zone, to generate ground balls — Would go a long way towards improving his pitching.

More than anything else analyzed above, Clayton Richard is having issues with his command. He isn’t putting pitches where he wants to, and he’s getting hit hard and walking batters far too often. While it’s easy to point to specific things that have changed in his pitching as culprits for his struggles, their true significance is impossible to really know. The ways in which Richard has changed in July, outlined above — Do seem to certainly be important factors in understanding what’s gone wrong.

With such a young team it’s important to have veteran guys like Clayton Richard around to show them how to perform in the Major Leagues. Since last season Richard has been a steady presence on a team with a fair amount of change and certainly a lot of players getting their first taste of the show. If he can’t be an average starter though, the youngsters Richard has been mentoring throughout the season are going to take his place in the rotation. Maybe a future Padres team with strong young pitching would utilize Richard as a long reliever regardless, but if his disappointing outings continue — He’ll certainly be a player who is used out of the bullpen. It’s not every day that you see your opening day starter’s rotation place be put in jeopardy due to performance, but it looks like that’s the case right now for Clayton Richard.

A sophomore at Willamette University in Oregon, Conrad is majoring in Spanish but is also a writing center assistant for other students at Willamette. He has been a Padres die-hard his whole life and hopes to bring comprehensible statistical analysis to the site.
Tags: Padres 2018, Padres Clayton Richard, Padres Stats, San Diego Padres, San Diego Padres Clayton Richard