How successful were the San Diego Padres in regards to using their replay challenges during the 2018 season? Let’s take a look as we examine the Padres compared to other MLB team.

The Padres’ 2018 season has been analyzed in depth through various methods over the course of the offseason, yet the impact of replay reviews on the team’s success is not something that has been considered.

A number of questions arise when discussing challenges because it’s somewhat impossible for us to measure the human element that is inherently a part of the decisions made at the replay review center in New York. In the end, an umpire has made an original call on the field, and another person in New York has then evaluated whether they agree with the umpire’s call.

Nonetheless, it’s worth considering some important questions as they pertain to evaluating the Padres’ replay review success during the 2018 season.

Let’s start with the obvious ones.

Did manager Andy Green make the right calls when making replay challenges in games? Was the staff talking to Green on the phone during games effectively evaluating whether Green should have asked for replay reviews on plays that were worthy of challenging?

These are questions that can’t be fully answered, though the challenge success of teams across MLB does offer a source with which to compare the success of the Padres in the same endeavor.

We need to look at the data regarding the Padres on replay challenges to get a basic idea of how the team fared. Here’s the baseline data with which we’ll be working, courtesy of Statcast: 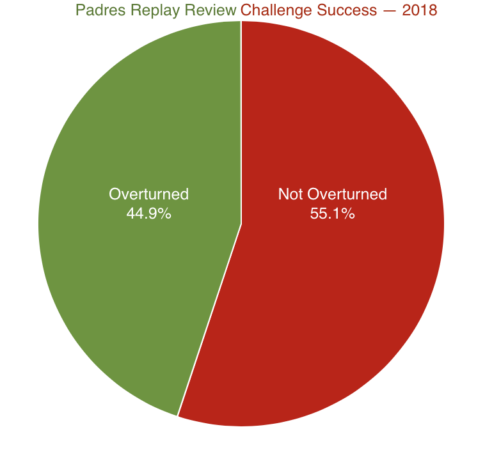 So the Padres were not completely successful in their replay challenges, as the data above tells us. That same data is based on 49 replay challenges that the team made during the season — 22 of those calls were overturned, while 27 of them were not overturned. How does the Padres’ data on challenges compare with that of the rest of MLB?

When compared to the league, the Padres’ replay challenges were noticeably different in their percentages of being overturned or not. Across baseball, 48.4% of reviewed plays were overturned, and 51.6% of replay reviews were upheld.  This difference in success compared with the rest of the league indicates that the Padres could have made better decisions when challenging plays on replay review. They were clearly below average in doing so, as the data regarding the league has told us.

Something to note as well is that the Padres started the year with a dismal ratio of successfully overturned calls per replay challenge they asked for, which was notable. To see how the team reversed this trend, let’s take a look at some additional numbers:

This was a remarkable turnaround for the Padres, considering how few replay reviews went their way during the first three months of the season. Maybe there was a change in the way the team approached replay reviews, that helped them better pick out what plays were more likely to be overturned if challenged. Again, we’ll never have enough information to find that out for ourselves. Briefly though, let’s go back to that last question of whether the team identified a specific type of play that was overturned more often on replay reviews.

The Statcast data tells us that 53.06% of the plays challenged by the Padres were on tag plays, which may be where the team decided to focus on with their replay reviews in the latter part of the season. This was a play the Padres challenged far more often than any other type, with those at first base being the second-most at 30.6% of plays on which manager Andy Green asked for a replay challenge. Obviously, if an umpire made a call on a play that was clearly wrong, the team was going to challenge the play — so the situation was a key factor in evaluating the team’s approach to replay reviews.

Nonetheless, the team could have easily adopted a philosophy that prioritized challenging tag plays. League-wide, teams only challenged tag plays on 40.9% of replay reviews requested by managers. The team challenged 26 tag plays throughout the 2018 season, which ranked third only to the Angels and Rays. Did the Padres find more success challenging calls on such plays, though?

Interestingly, the Padres only saw 50% of the tag plays they challenged reversed by New York. Well, that doesn’t make it any easier for us to evaluate the team’s success rate on decisions to challenge those plays. Unless of course, we once again analyze the team’s success in asking for replay reviews over time throughout the 2018 season.

Here are the numbers:

Yet again in this data, there’s some kind of amazing improvement in the team’s challenges that were overturned. It would be easy to say that the umpires were simply worse in the latter part of the season, and that was why the Padres had so many of their challenges overturned. That’s an easy answer, and maybe it’s the real reason behind the changes in challenge success the Padres saw. Consider this though; from July 30th through September 16th, the Padres saw ten straight replay review challenges overturned in their favor. That’s impressive, and an indication that perhaps the team improved in terms of their ability to identify the right types or kinds of tag plays to challenge later on in the season.

The 2018 season was rough for the Padres, and it’s hard to pick out the positives when the team was losing as often as they did. Surprisingly, the team may have made very legitimate strides in terms of their replay review success on the plays that they challenged. The numbers strongly indicate improvement from the team in that regard, which is something encouraging to take away from the most recent season. Why is replay challenge success very important, though? We should remember that baseball is a game of inches and that new technology has allowed us to better measure the game more specifically. It looks like the Padres may have made a new advancement in this regard, which should give them a competitive advantage during the 2019 season and beyond.

A sophomore at Willamette University in Oregon, Conrad is majoring in Spanish but is also a writing center assistant for other students at Willamette. He has been a Padres die-hard his whole life and hopes to bring comprehensible statistical analysis to the site.
Tags: Andy Green, Padres 2018, Padres Replay, San Diego Padres, San Diego Padres Replay