A significant part of why Eric Hosmer had such a rough 2018 campaign offensively was due to him having the lowest average launch angle among qualified major league hitters. In 2019 he’s started to hit more line drives, which has been key to him turning things around at the plate.

In December of 2018, I wrote an article that examined why Eric Hosmer had such a rough year in 2018. At the end of that piece, this is what I suggested regarding potential adjustments the first baseman should make:

“Currently, the Padres just need the best version of Eric Hosmer they can get, and that doesn’t require him to try and hit home runs every at-bat. If he could simply increase his launch angle to five degrees, for example, it would likely work wonders for his hitting results. 2018 NL MVP Christian Yelich had an average launch angle of 4.7 degrees — an example of a player who found considerable success with a more line-drive-heavy approach. If Hosmer were to cut down on his strikeouts and hit more balls in the air, he could be a much more valuable hitter for the Padres next season. To be the productive player he once was, Hosmer needs to make some relatively small adjustments to his hitting profile.”

It was frustrating to see him play so poorly in 2018 because he wasn’t really giving himself a chance to be successful by hitting so many ground balls.

His average launch angle of -1.2 degrees largely explains why the well-known first baseman didn’t produce much in the batter’s box.

Based on the Statcast data we have, Hosmer’s hitting has taken a big step forward in 2019:

As we can see, hitting the ball at an average launch angle that is more suitable for line drives has allowed Hosmer to hit the ball much harder than he did in 2018. He still hits balls on the ground with frequency, but he’s certainly hitting more line drives this season. Here’s some additional data that speaks to how he’s improved his batted ball profile this year:

Hosmer is hitting more line drives, fewer ground balls, and hitting the ball much harder this year than he did in 2018. So the data we’ve examined at has supported what we’ve seen on the field, where Hosmer has looked much better at the plate. He’s already hit 64 balls at 95+ mph according to Statcast, which ranks 21st among all major league hitters. By comparison, Hosmer ranked 216th in the same category in 2018.

In this piece I wrote last year, I noted that the first baseman had a more pronounced leg kick in 2018 than in 2017. It seemed like he was pressing in his first season with the Padres, and perhaps this was messing with his timing. Let’s see if he adjusted and made the leg kick more subtle. Below are GIFs of his leg kick in 2018 on the left, and 2019 on the right:

Doesn’t it look like his leg kick is higher in the frame on the left? Fast forward to 2019, and Hosmer has cut down on his leg kick and made it more subtle. Now obviously it’s hard to tell from these GIFs that there’s a significant difference between the two, so let’s go ahead and freeze each frame at the height of Hosmer’s leg kick: 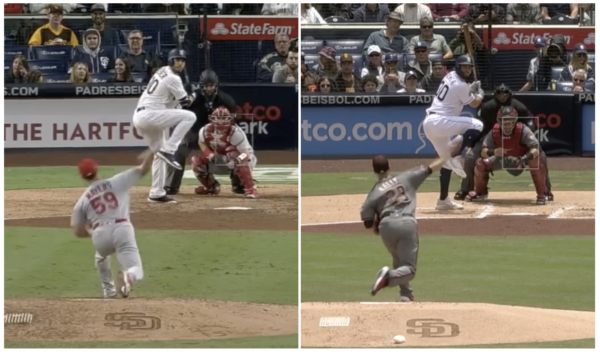 In these frames, we can see the differences between his two leg kicks and how Hosmer has simplified it this season. It’s the same camera angle at Petco Park in both images, which also helps confirm that there is a legitimate difference in the height of Hosmer’s leg kick. Now in his second year with the Padres, it looks like Hosmer has settled in and gotten back to being more of the hitter he was in 2017 with the Royals.

At the end of last season, Hosmer’s eight-year, $144 million contract with the Padres looked brutal for the team going into 2019. The situation has improved significantly since then, for several reasons. Primarily, Hosmer has gotten back to being his old self.

He’s gotten his launch angle up just enough to find success once again, which has helped a Padres offense that has struggled more than they were expected to in 2019. The addition of Manny Machado to the lineup, as well as the emergence of Franmil Reyes, has also taken a lot of pressure off Hosmer’s shoulders. It only took a couple offairly subtle changes to Hosmer’s approach at the plate, for him to begin unlocking his own potential as a hitter once again. As long as he can keep his average launch angles closer to five degrees rather than zero, he’ll be a productive part of the Padres’ lineup moving forward.

All Data in this article is courtesy of Statcast and Fangraphs.

A sophomore at Willamette University in Oregon, Conrad is majoring in Spanish but is also a writing center assistant for other students at Willamette. He has been a Padres die-hard his whole life and hopes to bring comprehensible statistical analysis to the site.
Tags: Eric Hosmer, Eric Hosmer San Diego Padres, Padres 2019, Padres Hosmer, Padres MLB, San Diego Padres

The Drought Has Ended for the Padres!

The Drought Has Ended for the Padres!