1- Strikeouts were a theme

The Tri-City Dust Devils had an impressive group of pitchers take the mound in the 2017 season. The staff was dominant from top to bottom, but offensively the team struggled to get anything going. The offense set a new Dust Devil record with strikeouts as the group contained many young players that looked overmatched at times. On the flip side, the pitching staff led the North West League in strikeouts with 764, which was a new record. They also collectively recorded a 3.05 ERA, which led the NWL.

Henry Henry, Emmanuel Ramirez, and Jose Galindo were all named to the mid-season all-star game. Each young hurler really established themself this year and each pitcher looks poised to play a complete season of full-season baseball next year for the first time. Galindo and Ramirez were already promoted and the lanky Henry has amazing stuff from the right side. At 18, Henry is really developed for his age. The Padres have a deep farm system and the Dust Devil’ fans witnessed it first hand. Adrian Morejon started with the Dust Devils before his time in Fort Wayne as well. There were plenty of young arms to watch in Washington this season.

These three collegiate pitchers were selected this season and had impressive professional debuts. Nick Margevicius, in particular, had a great debut in Tri-City. Alex Cunningham got a taste of the California League, with one game in Lake Elsinore, and Aaron Leasher pitched well in the NWL after a stint in the AZL. All three pitchers will be looking to make a full-season squad next spring as they attempt to establish themselves within the organization.

Players of the Year

Left fielder Robbie Podorsky was drafted in the 25th round out of McNee State this year. He has been a pleasant surprise, as he put up an impressive .400/.471/.556 batting line in his pro debut with the AZL Padres. After 11 games, he was sent to Tri-City and continued to hit there. The right-handed hitter has excellent speed and controls the bat very well. In his 194 at bats this season, he walked 16 times and struck out 15 times. That kind of plate discipline is rare in this day and age. What he lacks in power, is made up in his ability to track fly balls and consistently barrel up baseballs.

At 20, this young man is just starting to come into his own. He has been a bit of a late bloomer, but he should advance fast and has shown the ability to do so. His numbers are trending upwards, though there are still some concerns about his lack of plate discipline. At 6’4″ and 205 lbs, he should display more power than his 11 career homers in 774 at bats. Power is last to come for most hitters, and many suspect his will develop soon. 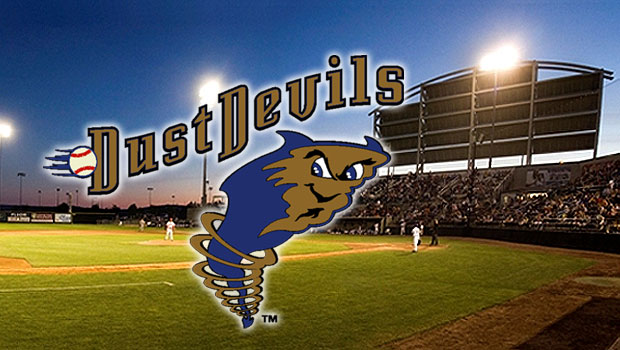 Pitchers of the Year

This young man made it all the way to Lake Elsinore, as he made six starts for the Storm. His 2017 was quite eventful, as the 23-year-old took his game to the next level. In total, he was 4-5 with a 3.10 ERA and a 1.21 WHIP in 21 games and 14 starts. The right-hander struck out 114 batters in 104.2 innings pitched, while only walking 30. Controlling the strike zone had been an issue for him and that was definitely a key to his success in 2017. He should be a name to keep an eye on as the next group of prospects comes knocking on the major league door.

At 22, this left-handed pitcher is beginning to really figure it out. The 8th-round selection in the 2016 draft out of Cornerstone had a productive second half for Tri-City. After beginning the year in Fort Wayne, where he went 2-3 with a 5.63 ERA and a 1.75 WHIP in 13 games, he was sent to the Dust Devils. The 6’8″ pitcher has great size, but will need time to completely refine his mechanics and motion. He is a decent prospect, who is just coming into his ability on the mound.

This right-handed pitcher had an impressive 16 games in Tri-City. In 18.1 innings pitched, the right-hander out of Loyola Marymount struck out 35 batters, while walking only two. His amazing 0.65 WHIP was easily the best on the team. He did struggle in his two games in Lake Elsinore (13.50 ERA-four earned runs in 2.2 innings pitched) but at 23, still has time to develop. Megill has the potential to be a decent eighth or ninth inning option down the road for the Padres.