It is difficult to quantify Doug Deakin’s impact on SDSU’s football program. Deakin walked on to the team in 2006 and has been part of the program ever since. As a player in 2009, he was an upperclassman when Brady Hoke first came to San Diego.

Hoke, trying to establish a new culture, announced to the team on day one, the Aztecs were going to win a conference title. An absurd claim from a team that just finished 2-10 the previous year, it nonetheless set the foundation for the new expectations of the program. Gone were the days of moral victories. Deakin bought into the vision, helping the culture take root among the players. His leadership was so effective his teammates elected him Team Captain in 2010.

“At that time in my life, it was probably one of the proudest days of it,” Deakin said as part of an upcoming episode to The SDSU Football Podcast. “That’s because you have the respect of your teammates, and whether they liked me or not, they wanted and appointed me in a leadership position to represent them. That means the world…that was very special, and a day I will never forget.”

In retrospect, the Aztecs electing the team’s field goal and extra point holder as a captain was the first outward sign Hoke’s message had sunk into the team’s psyche. When Hoke left to take over at Michigan at the end of 2010, Deakin was part of Rocky Long’s first coaching staff on the Mesa as a graduate assistant. Upon earning his Master’s Degree, Deakin was hired to lead the special teams, which he has done effectively, as evidenced by Matt Araiza’s rise to stardom and Jordan Byrd’s accolades in 2021.

“It wasn’t simply what the 2010 team saw in Doug. It was what anyone around the program saw in him from the moment he stepped onto campus,” Ryan Lindley told EVT this week. “You couldn’t find another person in that building that worked harder or took more pride in their role than Deak. To cite one example would be impossible because Doug was the best among us day in and day out.”

Part of the DNA of the program is depending on former players to influence and lead the current players. Deakin is one of several alumni who came back to be on staff at SDSU during Long and Hoke’s tenures. These “Aztecs for Life” bring an unmistakable pride and passion to their roles.

“Here at San Diego State, a lot of former Aztecs have been on the staff in the past fourteen years now,” Deakin explained. “Being one of them and having great pride, and obviously, learning from coaches, coach Hoke, coach Long, and among the assistant coaches, coach Horton, just to name three of the many. The experience that they have, the way that they teach, keeping it simple, keeping it pertinent, keeping it fun, and they love competing. That’s what Aztec football is all about, and why we have success.”

Deakin will need to bring all of his experience to bear in 2022. SDSU’s special teams coach is tasked with replacing Araiza for all three kicking duties, finding a kickoff returner to replace Kaegun Williams, and potentially locating replacements for Jordan Byrd if the dynamic back’s workload increases significantly on offense. Below is a look at where the special teams’ competition stands in spring camp. 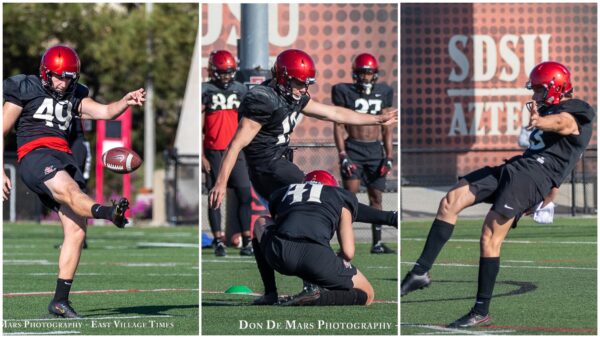 Coach Deakin’s stated preference is to have one specialist handle no more than two kicking phases. This would allow a player to focus more on their duties without having to split practice time.  Barring an injury, the only player who could conceivably win the role Araiza had last year is Jack Browning. If the season started today, Browning would start as the field goal kicker, punter, and kickoff specialist. Browning is being pushed by David Delgado and Collyn Hopkins.

“We have three combo kickers so they can punt and kick field goals and kickoffs,” Deakin said. “Jack Browning, a Hometown Hero from Grossmont, … he did so well with Matt last season, at any point if the load was too much for Matt, which I thought would be at some point, … I felt confident, we felt confident as a staff, he could step in any three of the capacities.”

“Collyn Hopkins … came out of high school in the winter session, was here in spring of last year, and did a tremendous job of adding to that competition. Want to talk about a powerful leg? That’s Collyn. What he’s learning to do is operation time, the little details in his technique to be consistent.  Yesterday … it was (eight) punt vs. punt return  … him and Jack were toe-for-toe. He had a 46-yard punt average. It was one of the best days I’ve seen him here at San Diego State in terms of consistency, operation time, kick yardage, and location.”

“David Delgado, another Hometown Hero, from Hilltop High School. He, unfortunately, got injured in Fall Camp last year had to have surgery here in December. He’s recovered. He’s in the process of rehabilitating. He’s been out there for the first six spring practices been taking some field goal reps. We are going to be very smart about distance and amount of reps. He’s another guy that adds to that competition.”

For the first time in three seasons, the Aztecs are looking to replace a kickoff returner. Kaegun Williams’ departure opened up a spot alongside Jordan Byrd. Williams averaged 23.7 yards a return over his career, including a 95 touchdown kickoff return for a touchdown against San Jose State in 2019 and a 52-yard return to start the second half of the Frisco Bowl last season.

“We’ve got some really dynamic guys when you put the ball in their hands that Aztec Nation is going to find out about shortly,” Deakin said “…guys that come to mind are Brionne Penny, Josh Nicholson, Cam Davis, so any of those guys are going to be battling it out. … Those are some guys that I see and expect to really turn heads, and hopefully, perform and execute to win the job.”

Jordan Byrd figures to be the primary punt returner.

Byrd led the MW in punt return yards a season ago. With the prowess the team showed in blocking punts, Byrd had 27 attempts and frequently seemed close to breaking off a huge gain. There is a chance, though, that coach Deakin will need to use someone other than Byrd in this role. The senior running back’s load in the offense is expected to grow in 2022. If it increases enough, the coaching staff might want to spare him the return duties. One name to keep an eye on in this scenario is Mekhi Shaw.

“Really excited about Mekhi,” Deakin said. “Boy, does he play the game the right way! … He played last year significantly on special teams and was one of our top point producers. Sky’s the limit for him because he’s got a high football IQ. You explain a concept once, and he seemingly gets it. If he doesn’t, he’s going a million miles an hour. Those are the guys you love to coach.”

My earliest sport's memory involve tailgating at the Murph, running down the circular exit ramps, and seeing the Padres, Chargers and Aztecs play. As a second generation Aztec, I am passionate about all things SDSU. Other interests include raising my four children, being a great husband and teaching high school.
Tags: Aztecs, Brionne Penny, Cam Davis, Collyn Hopkins, David Delgado, Doug Deakin, Jack Browning, Josh Nicholson