San Diego Padres catcher Austin Hedges has value, but what exactly does he provide to the Friars?

There are mostly two schools of thought regarding Austin Hedges.

One is the “he doesn’t hit nearly enough to justify being the primary catcher” argument; the other is “he has just enough pop to supplement his rare defensive abilities” and, as a result, absolutely deserves to catch most days.

He’s probably the most polarizing player on the roster for 2019, and catcher just so happens to be the single most difficult position to evaluate in baseball.

So, in this piece, we’ll attempt to sort this all out by taking a look at some Hedges stats as they relate to the rest of the league, Francisco Mejía, and some of the catchers on the best teams the league had to offer in 2018. Lots of tables and stats in this one, so stick with me.

It’s no secret that Hedges is a poor hitter.

Just how poor, though, is a question sometimes masked by his dormant power that tends to erupt in big spots. As the league moves towards the Three True Outcomes (home run, walk, strikeout) approach, it’s presumably gotten a bit easier to forgive Hedges’ performance at the dish because of his pop. But that pop just doesn’t show itself nearly often enough to make up for his other offensive deficiencies, of which there are plenty.

Take a look at where Hedges ranks among Major League catchers in various offensive categories: 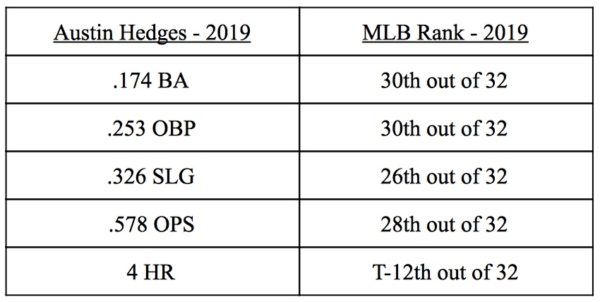 Everything I just told you in word form is translated to number form in the table above. Among catchers with at least 75 plate appearances, he’s been bringing up the rear in every category not titled “home runs”. Even slugging percentage, which is aided heavily by the ever-glorious home run, grades out very poorly. What does that tell you? Well, he’ll run into one every once in a while, but he’s not giving you any tangencial production. Very few doubles, no triples. Heck, not many singles either.

Before the sample size police fire up their sirens and come after me, I’ve got something for you, too. Here’s some Hedges stats and rankings from the start of the 2016 season (his first year in the Majors) through the end of 2018, among catchers with 750 plate appearances:

At best, below average. At worst, dreadful. Even his affinity for the long ball takes a hit here, so the one calling card he may or may not have offensively might not be much of a calling card at all. It’s just the thing he happens to do best in a sea of things he does very poorly. However…

In 2019, Austin Hedges has been the single best defensive catcher in baseball in stats that matter.

Defensive Runs Saved is pretty self-explanatory – his defense has saved eight runs this year. The second stat, Framing Runs, is a little bit more complex. It relates to pitch framing and a catcher’s effectiveness at getting pitches called strikes at the margins, and consequently, the number of runs a catcher has saved as a result. It’s a relatively new concept when it comes to evaluating catchers, and as a result, is not as refined as other baseball statistics. Also of note, there’s a built-in level of uncertainty due to the erroneous nature of umpires. For example, did the catcher steal that strike with his framing, or did the umpire just make a bad call? The Framing Runs statistic sees that as being the same, which of course is not the case. Regardless of all that, though, he’s the best at it.

To put it in more general terms, Hedges is a rare defensive talent at the single most important defensive position on the field. There is a legitimate argument to be made that what he does on the offensive side of the ball truly doesn’t matter as long as he continues to play defense at the level that he has to begin his career.

Another relevant angle in the Austin Hedges story is how he compares to Francisco Mejía.

The problem there, however, lies in Mejía’s ridiculously small sample size. Based upon scouting reports and the like, Mejía is a much better hitter. Play a Hedges swing and a Mejía swing side by side, and that’ll become obvious fairly quickly. But aside from his rocket arm, Mejía has shown some very concerning deficiencies defensively, and people around the league have wondered, and continue to wonder, if he will ever reach the level of a passable Major League catcher.

If you see a whole lot of nothing, don’t worry. That’s what I see too. There’s just not enough data from Mejía to be able to determine who is more valuable. But if the Padres are committed to Hedges as the primary catcher, and early lineup trends say that they are, there needs to be a serious paradigm shift in the handling of Mejía. A young catcher with a high offensive ceiling needs at-bats, and considering he cost Brad Hand and Adam Cimber from a bullpen that is suddenly struggling mightily in 2019, they’d better not mess it up. But that’s an article for another day.

So, the question remains. Does the good outweigh the bad with Austin Hedges? The stats so far have provided good context but have ultimately been inconclusive. This one, though, I think makes a serious case in favor of “yes.” Here it is, the WAR for every primary catcher of a 2018 postseason team, plus Austin Hedges. Because after all, that’s what the goal is here – to field a good enough catcher to contribute to a good enough team to make the postseason: 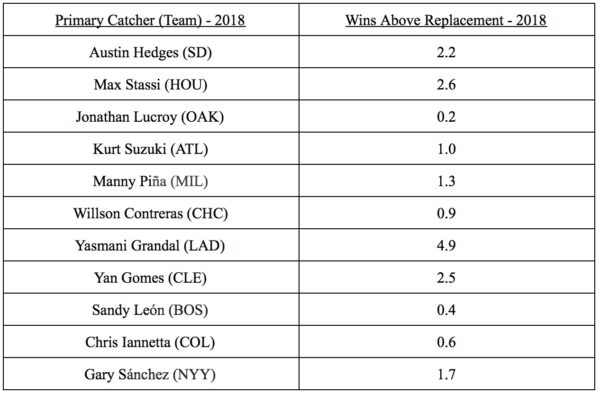 If the Padres were to make the postseason last year, Austin Hedges would have been the fourth-best catcher still playing in October. It’s clear that the rest of the roster will fill out into one worthy of postseason contention very shortly, if not as early as this season. So if Hedges can remain steady, he certainly won’t represent the black hole that many people see him as. This can all change with a significant regression, but the verdict as of now, as backed up by statistics, is this: Austin Hedges can pull his weight as the primary catcher on a postseason team. If he shows any significant offensive improvement, he has a chance to ascend into the upper-echelon of Major League catchers.

Born and raised in San Diego, CA. Currently living in Eugene, OR as a junior at the University of Oregon. Journalism major, Padre fan, music lover. Attended my first Padre game at the Q in 1998 when I was three months old. Follow me on Twitter: @BradyLim619.
Tags: Austin Hedges, Padres 2019, Padres Austin Hedges, Padres Hedges, San Diego Padres

Excellent article; it’s pieces like this that keep me coming back to EVT! Quite the conundrum, really. But I’m wondering if the Padres can’t have it both ways. Here’s what I mean: keep Hedges as your primary catcher, but give Mejia more starts (say, 60% for Hedges, 40% for Mejia). Then, work out a trade on some of the surplus OF’s (Hunter Renfroe and/or Manuel Margot) with a prospect or two to upgrade the rotation, and give Mejia some starts in left field. This will do a few things: 1. Give Mejia more AB’s and opportunities to develop offensively. 2.… Read more »

Hedges is not a complete major league catcher, and won’t be until he can hit at least 250. Neither is Mejia. We haven’t seen enough of Allen to know about him yet. There are others down in the farm system that will be knocking on the door sooner or later. Catching is not the only problem the Padres have right now. When Tatis and Cordero come back and they bring up Urias, then we as true Padre fans will no longer have to suffer the likes of Kinsler and Myers. The Padres need a couple of right handers to insert… Read more »

Like the article. Wanted to make a quick point. Austin’s defense and framing truly should not to be underestimated nor under appreciated when considering how many new faces and arms he has ushered into the majors upon his arrival. How many rookies, rule 5 guys, pitchers coming back from TJ surgery has he paired with? In addition to all the pitchers he now has been elevated to mentor for Allen and Mejia, yet another heavy task for a relatively new player. Concerning hitting (2016 to present) of the catchers we are comparing him with, how many of them face premier… Read more »

Not a great read. Pros and Cons on Hedges is more obvious than the pros and cons of drinking milk before it expires.

If Hedges hits for a wRC+ of 90, like 2018, he’s a keeper, but if it’s 51 like this year, no. Especially on a team that hits so poorly, a player will need to hit to keep his job. You are spot on to remind about the bizarre Mejia trade. Why trade for a guy who doesn’t look like he can field his position? Cleveland tried him at 3B and the OF, and the player resisted it. Cleveland must still be laughing about it, Hand and Cimber are key parts of their pen, and Mejia has been brutal here. It’s… Read more »