With the DH a real possibility for the National League, here are some current DH options for the San Diego Padres once the 2020 season finally begins.

With the shortened season and proposed new format, the San Diego Padres, as well as all National League teams, will use a designated hitter in 2020.

Given the format and increased interleague play, this move makes sense from MLB as it will keep pitchers more focused on pitching and keeping their arms healthy after the start-and-stop Spring Training.

The San Diego Padres will have several different options for a DH. It is often that teams platoon a DH that batter is only in to hit. Certain DHs don’t need to be platooned, but the Padres don’t have a player who hits both left-and-right-handed pitchers exceptionally well while also not playing great defensively.

Players like Manny Machado, Fernando Tatis Jr., and Tommy Pham are everyday players who might DH to have an “off-day” as another option.

Josh Naylor is the first player to come to mind when contemplating the Padres potential DH in 2020. With Eric Hosmer at first base, Naylor’s primary position is filled. Given that Naylor is below average defensively in the outfield, his bat can be utilized in a DH role.

Naylor tore up the minor leagues and broke through into the majors in 2019. His performance at the plate served well as a rookie on a losing team but needs to improve in 2020 to see consistent playing time as a potential DH. In 253 major league at-bats, Naylor recorded eight homers with 32 RBIs and a .249 average with a .315 OBP.

Platoon splits wise, Naylor hits righties better for power, but lefties better for average. It is tough to imagine Naylor getting many at-bats against lefties. Naylor’s production is also expected to increase with more experience. 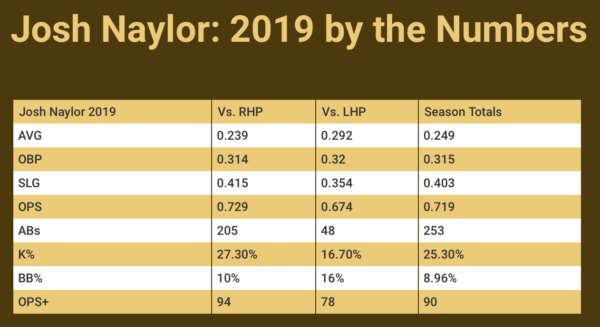 Wil Myers, similar to Naylor, is a below-average defender in the outfield without a true position to play. With a solid bat at times, Myers is also a DH candidate.

Myers’ platoon splits are opposite of Naylor’s. Myers hits for a better average against RHP, but slugs LHP better. Although Myers doesn’t get as many hits against LHP, he draws a lot of walks against lefties. Myers can bat in front of a slugger like Machado and get base frequently, then use his speed to possibly steal. 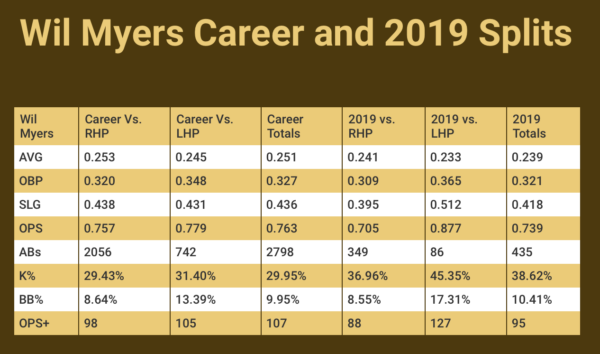 Francisco Mejia, the switch-hitting catcher, gets his playing time because of his bat. After a robust second stint in the majors in 2019, Mejia proved he belongs. His catching skills are still lacking, but the possibility of a DH allows Mejia’s bat to be in the lineup while Austin Hedges catches to help the pitchers.

Mejia hit better for average as a right-handed hitter, but he slugged much better as a left-handed hitter. Mejia did strike out at a higher rate against RHP, but Mejia is a free swinger, so he is going to strike out in his natural approach. 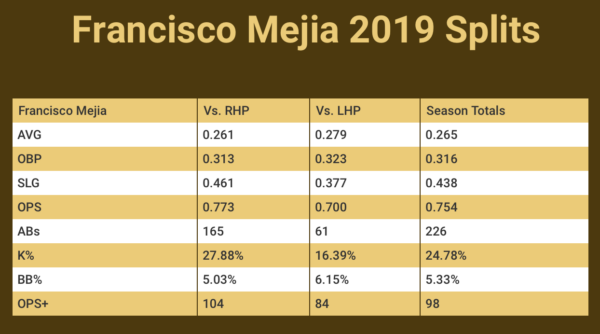 Franchy Cordero is another DH option for the San Diego Padres. Cordero struggles to stay on the field, but when healthy, he rakes. Using Cordero as a DH will keep him healthier as he is not spending time in the field. Cordero is also not great in the field, so this move could just be strategic lineup wise.

Cordero is all-around better against RHP, which isn’t surprising given he is a lefty. Cordero’s speed and power combo can potentially fit in the middle or bottom of the lineup. 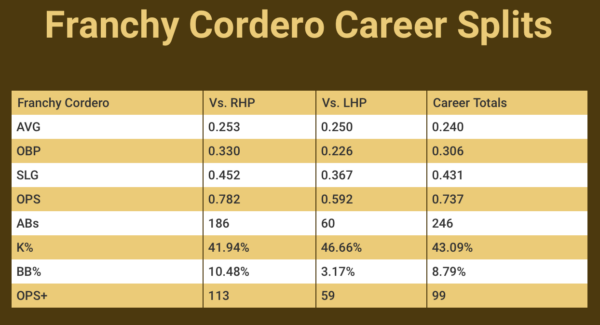 The final DH option for the San Diego Padres is Brian Dozier. Dozier plays at a very deep position, second base. Without a clear role in the field for Dozier, DH can be an option.

Dozier crushes LHP, so using Dozier as the DH against the lefty seems reasonable. Historically, Dozier does not hit RHP well, so Garcia can play second base while a different hitter is used as the DH. 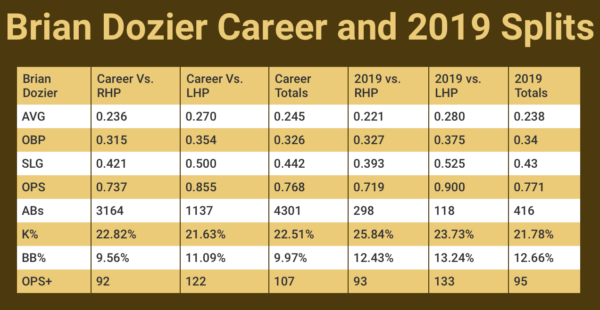 The San Diego Padres have several options for a designated hitter if this is ultimately implemented for 2020. Manager Jayce Tingler can be creative and platoon or rotate guys at the DH spot to best certain matchups and give players rest. The designated hitter gives a new tool for the new manager. Will he use it correctly?

Please add Ty France to the list. He is an excellent hitter with much potential. He is blocked by Machado at third base and Profar and Garcia at second base, but the Padres would definitely benefit from his bat in the lineup.

Koke Vegas is doing all he can to help SD Loyal